Report revives debate over risks of radiation from drilling waste 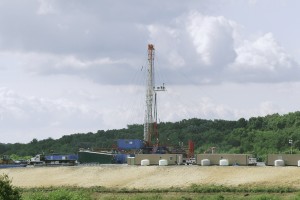 Drilling waste from rigs like this in Zelionople, Pa. could pose a danger to public health, a new report says.

Concern over whether oil and gas drilling waste emits radiation at unhealthy levels in Pennsylvania has resurfaced with the publication of a report alleging the Department of Environmental Protection ignored hazardous radioactivity from the industry when it issued its own study on the issue almost a year ago.

The environmental group Delaware Riverkeeper Network said on Dec. 16 that DEP “turned a blind eye” to the dangers of radioactivity from gas wells, landfills, and sites where gas is being used, and accused the department of publishing a “fatally flawed and misleading” report last January on Technologically Enhanced Naturally Occurring Radioactivity (TENORM).

The DRN report, written by Dr. Marvin Resnikoff, a consultant on radioactive waste issues, said DEP failed to act on evidence of radium, a leading cause of lung cancer, leaking from landfills where oil and gas waste is dumped; failed to adequately regulate the transport of brine or wastewater transport, and did not accurately sample the radioactivity of various waste products.

But the DEP report, which concluded that there was little danger to public health from radiation resulting from oil and gas waste, was defended by its leading scientist, and by a member of Penn State University’s Marcellus Center for Outreach and Research. Both said the DEP document is a thorough examination of the issue that confirms Pennsylvania as a national leader in research on TENORM – the name given to radioactive materials such as uranium, thorium and radium, which are brought to the earth’s surface during the hydraulic fracturing of oil and gas deposits.

“The risk of the general public being exposed to radium-226 or 228 via drill cuttings, pipelines, landfills, wastewater treatment plants, well sites and other operations is simply not a real threat since the general public is not in contact with these materials,” said David Yoxtheimer, an extension associate with the Penn State team, in an interview with StateImpact.

Yoxtheimer dismissed DRN’s assertion that radium-226 “could be” contaminating waterways by escaping from waste water or landfill leachate without being sampled or treated.

He said there may be some risk to oil and gas workers but that such risks can be minimized by workplace safety protocols for radiation.

“The Resnikoff report does identify the fact that there is some risk under some scenarios, but as the DEP report shows, the risks are not widespread,” Yoxtheimer said. He noted that the DEP report was consistent with earlier research by the United States Geological Survey which concluded that radon from shale gas itself – rather than the waste generated during its extraction – was not a significant risk to downstream users.

In a rebuttal to Yoxtheimer’s comments, DRN said the public is exposed to radioactive drilling waste that is buried in places, notably private land that has been leased to drillers, that are publicly accessible.

“It is simply untrue that the public is not in contact with these materials,” said Tracy Carluccio, deputy director of DRN. “Many wells are located on land that people continued to live on, farm and use for their own purposes years after a well site pit is closed up and covered over.”

Responding to Yoxtheimer’s assertion that levels of leachate radioactivity from landfills that accept drilling waste are no higher than from those that do not, Carluccio said DEP has not fully disclosed information that would allow an accurate assessment of radiation levels at specific landfills, and whether they threaten water supplies.

Following a right-to-know request filed by DRN, DEP has refused to say whether all leachate samples were filtered, and the locations of landfills that receive drilling waste, Carluccio said.

“This cannot be dismissed as ‘no problem’ simply because some level of radium-226 is being found in all PA landfill leachate,” she said. “We have no idea how big this problem is, where it is, and what the ‘tipping point’ that triggers a health problem is.”

Carluccio also called on DEP to disclose what is happening to the estimated 10-15% of flowback waste such as sludges and residues from settling ponds and holding tanks that is typically not recycled by drillers.

“Until it can be shown that representative and valid sampling and methodologies were used to sample these non-recyclable materials, it cannot be assumed that there is no waste that remains that poses substantial health and environmental issues,” she said.

Dr. David Allard, the technical lead on the DEP’s report, said he would only respond to DRN’s allegations at a “high level” but stood by the DEP’s findings, and was ready to discuss the science at any time.

“I understand where they are coming from,” Allard told StateImpact. “They want to protect the Delaware River Basin, and I’m all for that but I would like to be able to talk about the science in a rational way rather than with any rhetoric or emotions. I don’t want to throw rocks at Resnikoff but I’m confident of the conclusions in our report.”

Allard rejected a suggestion that the report, which was written and researched over about five years, mostly during the administration of former Republican governor Tom Corbett, could have been influenced by an administration that was friendly to the gas industry.

“This goes back to the end of the Rendell administration,” Allard said, referring to the previous Democratic governor. “It’s a scientific issue, an environmental issue, a public health issue. I think everybody understands that. I try to stick with the science.”

Allard called the DEP study a “cradle to grave” project that examined all possible sources of TENORM connected to the oil and gas industry, including landfills, wastewater treatment facilities, wellheads and conventional well brines.

It concluded there was no potential for exceeding the public dose limit, and that TENORM was actually lower in many cases than Pennsylvania’s naturally occurring (NORM) levels, which are some of the highest in the world.

“All of this is low-level radioactivity – levels that may pale in comparison with some of the natural areas we’ve got here in Pennsylvania,” Allard said.

Ten stories from 2015 worth hearing again