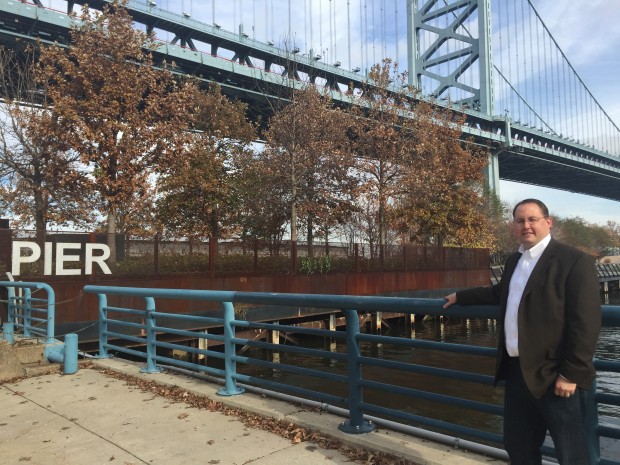 Chris Crockett, deputy commissioner of planning and environmental services for the city of Philadelphia’s water department stands by the Delaware River at high tide.

This week ministers from 190 nations will be in Paris to hammer out a treaty to cut carbon dioxide emissions. It’s a geo-political gathering aimed at staving off the worst impacts of climate change – including sea level rise. Predictions of how high and how soon oceans will rise keep changing. And that leaves town planners and local officials with a dilemma. They are the ones responsible for protecting their cities from rising tides and hotter summers. But there’s no seat at the table for them in Paris, and likely no help.

Chris Crockett is the guy everyone told me to talk to about climate change in Philadelphia. He works with the city’s water department and I met him on banks of the Delaware River, just before high tide. He pointed to a storm sewer grate in the roadway, where water had begun to rise on a sunny day.

“Once every two weeks or so, on Delaware Avenue at this location, we have the water pond up a little bit and the question would be, what if you added three feet to that?”

It’s Crockett’s job to help prepare the city for rising sea levels. And while Philadelphia is in a better position then cities like New York or Boston when it comes to the impacts of sea level rise, the city does sit along a tidal river, the Delaware. And the tide here along the Delaware river rises and falls 6 to 7 feet, two times a day, all the way up to Trenton, New Jersey.

“It’s just like a big bath tub sloshing back and forth,” says Crockett, “and so we want to make sure the salt line doesn’t come up to the city’s water supply intakes.”

Crockett is an engineer. So when he’s faced with a challenge, like deciding how to maintain a centuries old water and sewer system, he thinks like an engineer and wants to proceed logically.

“One of the fun things in engineering is, we would always teach this concept of stationarity, which is you go back and look at the historical record and say: OK, this is the 100 year storm, this was the fifty-year storm. And that sets your design criteria for how you design a road, a highway, a pipe, a bridge.”

And this is where Crockett’s job is getting a lot more difficult. While planning for new systems, Crockett can’t simply depend anymore on looking to the past as his guide to the future. Those 50 and 100-year flood maps that the Federal Emergency Management Agency puts out are based on past events. They’re pretty useless when it comes to rising sea levels.

Five years ago, the Army Corps of Engineers predicted three feet of sea level rise by 2100. But today, some are predicting a two-foot rise as soon as 2050.

“You really want to know how high can it go?” he told me. “When is it going to stop? Should we just plan for everything melting?”

Will the seas rise two feet by 2050? Or even higher? Crockett wants to know.

“So we can actually stand here and say: OK, it’s going to to be four feet, five feet, let’s draw some lines, let’s stand here and look at it and see what it means. And how would we have to change how we design, build or operate this city?”

Local Officials Plot Their Own Course

Climate change models show Philadelphia becoming hotter and wetter. And the wetter part will happen mostly in the winter. Those predictions have already started to play out. Since 2010 Philadelphia experienced its two wettest years, and its two hottest summers on record. 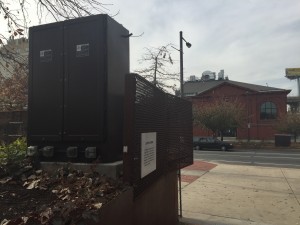 To prepare for climate change, cities like Philadelphia are making sure new electrical infrastructure will be above rising sea levels.

But even in today’s highly interconnected world, there’s no real road map for local officials. So it’s left to people like Katherine Gajewski to figure it out. Gajewski runs Philadelphia’s office of sustainability. It’s her job to work with all the city’s departments, from the people who fix potholes, to the people who manage the city’s budget, and get them planning for climate change.

“We can’t wait for someone to tell us what to do and how to do it,” she says, “we need to start planning for our own benefit.”

She wanted to meet me at the corner of 17th and Chestnut streets so she could show me one of the things the city is doing to plan for warmer temperatures. Concrete pads are now replacing asphalt at busy bus stops. That’s because when busses stop and start, it generates a lot of heat that makes the asphalt buckle. Concrete is more durable. And with higher temperatures, buckling city streets are just going to get worse.

“So climate effects are felt at the local level,” she said. “Climate solutions are going to have to come from the local level. So whatever national agreements come [from the Paris talks], we need to recognize the role of cities.”

It may seem like a mundane solution to a far reaching global problem. But the city has to adapt on the cheap. It’s installed rain gardens and green roofs. It’s also installed experimental pervious pavement. Basically, it wants to keep every drop of rain water it can from entering the sewer system and flooding basements. And since parts of the city has been built on former swamps and wetlands, it won’t be an easy job.

The News From Paris

When you hear the news from the Paris climate talks over the next couple of weeks, there will be a lot of numbers and abstractions with references to carbon budgets and emissions limits, and questions about whether the richer countries will pay the poorer countries to burn less fossil fuels. But you won’t hear anything from people like Katherine Gajewski or the water department’s Chris Crockett, because local governments have no role.

“And so you have nations coming together to put their commitments on the table,” said Gajewski, “but with a disconnect from what we’re understanding on the ground is achievable, realistic, or not.”

Further up along the banks of the Delaware river, the water department’s Chris Crockett shows me rain gardens installed along Delware Avenue, in hopes to stem flooding from high tides and storm surges. Along a bike trail near the Sugerhouse Casino, trees, grasses and flowers grow in pits lined with gravel.

“It looks to the average person to be a typical flower bed or long grass median,” he says. “But it’s taking thousands and thousands of gallons of stormwater, cleaning it up, and reusing it. The trees suck carbon dioxide out of the air and create oxygen.”

None of these solutions came from state or federal agencies. Philadelphia, like cities all over the world are still on their own when it comes to mitigation and adaptation.

So here’s Crockett’s hope. He wants the bureaucrats who are meeting in Paris to give him the certainty he needs as an engineer to plan future construction. And allow him to make the city more resilient to higher tides.

“When you suddenly say the past doesn’t predict the future, and now you’re left with almost acting like a stockbroker,” he said. “And climate change goes from a standard scientific approach to almost acting like a Wall Street broker predicting what the stocks are going to do.”

And Crockett isn’t interested in playing the market. He wants to solve problems.