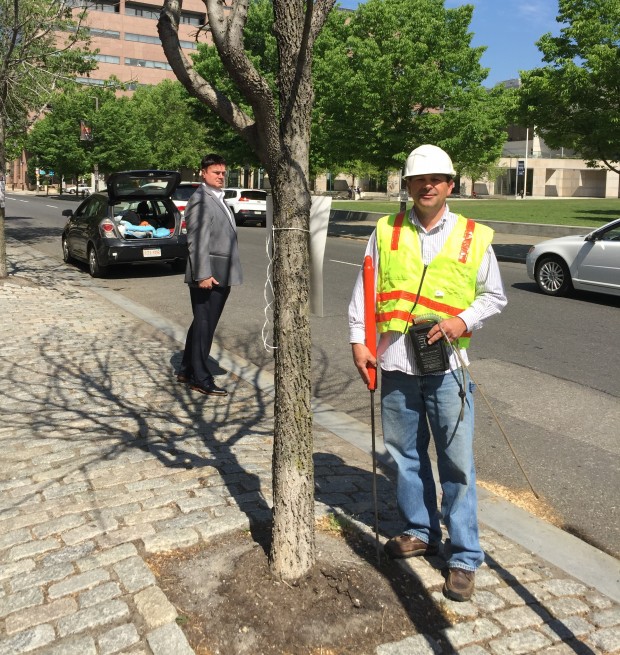 Gas safety consultant Bob Ackley stands next to a dead tree across from the Constitution Center in Philadelphia.

Street trees can be especially vulnerable to pests, disease, and lack of water. But it turns out a hidden culprit could also be killing trees — gas leaks.

Here’s something most people who work for gas companies know, but the rest of us don’t, when you want to sniff out a leak check for dead or dying vegetation. Evidence for this dates back to the mid-1800’s when naturalists documented the connection between street gas lamps and dying trees, says Nathan Phillips, a tree physiologist and professor at Boston University.

“The causal mechanisms are most likely, primarily, oxygen deprivation,” said Phillips.  “Roots need oxygen to grow and maintain themselves, and natural gas has no oxygen.”

But tree lovers take comfort, there is at least one guy who has made it his mission to save the trees from gas leaks.

“I call him the urban naturalist because he understands the visible indicators above ground of what’s happenening below ground,” said Phillips.

His name is Bob Ackley, and he drove all the way down from Boston to take me on a tour of my own neighborhood.

“This is the first time I’ve been to Philadelphia and I never had a cheesesteak, so what the heck,” said Ackley, when I met him in the historical section of Philadelphia, across from the Constitution Center. 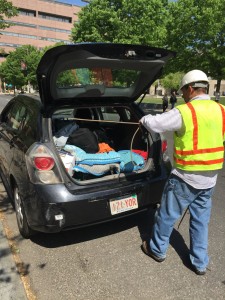 Gas safety consultant Bob Ackley has outfitted his car to detect gas leaks as he drives.

For more than 35 years, Ackley worked for the natural gas industry conducting leakage surveys for utilities up and down the East Coast. But he got bored, and decided to change his focus. He’s now a consultant for municipalities trying to save trees from methane poisoning.

“At the end of the day testing pipelines was getting mundane, the tree issue, not many people knew about it,” he said.

He’s right, I reached out to both the Pennsylvania Horticultural Society and the U.S. Forest Service, and it wasn’t on the radar of anyone I spoke to.

I also called Joan Blaustein, who is in charge of street trees for the Philadelphia Department of Parks and Recreation. Blaustein knew that methane could over time kill a tree, but she hadn’t made the connection between the thousands of small methane leaks across the city, and the health of street trees.

“We haven’t pin-pointed it as a particular issue here,” she said, “but it’s something we can add to the mix as we try to insure that we keep trees as long as we can.”

Like a lot of cities these days, Philadelphia wants to keep up its tree canopy. Blaustein says the city has an estimated 130,000 street trees. Philadelphia plants between 1000 and 3000 new trees each year. And each one costs between four to six-hundred dollars.

Blaustein says most of the city’s trees die from old age. But other things kill them as well, like disease, pests, storms, and lack of water.

Ackley has parked his car in front of the National Constitution Center with his blinkers on. He also works as a gas safety consultant, so he puts on a hard hat, a yellow vest and safety glasses. He says he wants to look official while blocking traffic. Cars honk at him, a lot.

“Don’t worry he’s not gonna run me over,” he says reassuringly.

His car has a side view mirror attached with duct tape. But inside, he shows me some pretty sophisticated equipment.

“We have the Piccaro analyzer with the vacuum pump, GPS analyzer, a 110 power supply running to the battery, it’s basically a cavity ring-down spectrometer, with a laptop computer inside what looks like a traditional desk top computer. And all this is connected together for a time stamp, GPS stamp and a methane stamp in parts per billion.”

He’s also got a more traditional flame ionization unit that traces methane leaks. He likes to use two systems to check his work. Right in front of the Constitution Center, he starts to take his readings. 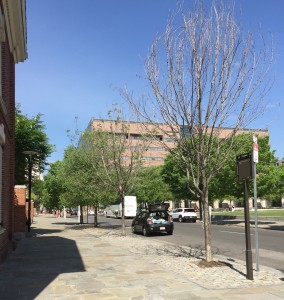 A dead tree stands near a number of trees that have thinning crowns across from the Constitution Center in Philadelphia.

“So right in this location we have one tree dead, two trees dead, third tree weakened, fourth tree weakened, and we don’t know about that other one,” he says. “Because the gas leaks continue right along this cast iron main.”

Cast iron is the culprit here. Philadelphia has about 1500 miles of cast iron pipes that run underneath streets, and connect to buildings. Some were installed 100 years ago and they leak gas. In fact, the city has some of the leakiest gas pipes in the nation. Philadelphia Gas Works has been replacing them with plastic pipe. But it’s expensive and takes time. Current estimates say it will take about 80 years, but that could speed up if the Public Utility Commission approves a rate hike.

Some leaks are large or dangerous, and they get fixed quickly, especially if there is a risk of explosion. Others are small, and although harmful to trees, they pose no threat to humans. So the hundreds of small leaks are not high on the list for fixing.

“These joint leaks won’t blow your house up but it will kill your trees,” says Ackley.

Ackleys car is designed to detect methane leaks as he drives. When he started working for gas companies, he was taught to look for dead or dying vegetation in order to sniff out a leak. Today, he doesn’t even have to get out of his car, so we start driving.

“So as we look at the street here we can see there’s the yellow paint marks, and there’s an 8-inch main that runs down here.”

Ackley says much of his job is visual. Utility workers have an above ground code that tells them what is buried below ground. All those color-coded paint marks with initials and numbers that are sprayed onto the sidewalks and roadways all have a meaning. Yellow marks a gas pipe, 8 refers to an 8-inch diameter pipe and CI means cast iron. He also looks for trees with thinning crowns, or those that have no leaves at all. If they lie in a row, along a gas pipe, chances are, he says, there’s a leak that’s killing the trees.

“And you can see right here there’s a little round hole in the street, and there’s a patch and see the series of drill holes, this is where they had a leak,” he says.

The equipment starts buzzing detecting a leak nearby. 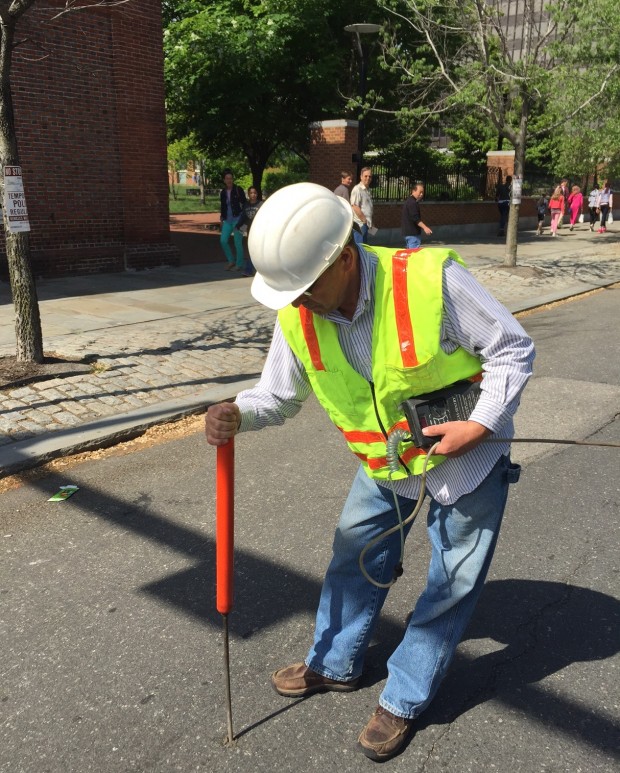 Bob Ackley uses a bang bar to drill a small hole in the street to check for gas leaks.

But because not all trees die from methane poisoning, he wants to get into the soil to test the methane levels at the roots, that’s where the danger lies.

Ackley gets out of the car and takes out a long thin pole with a pin at the end of it, and starts drilling a small hole next to a dying tree in front of the Old Quaker Meeting House at 5th and Arch streets.

”Ok this should get the gas read here.”

Then he puts a thin hose into the hole, which is connected to equipment that sucks up the air and gives him a gas reading, he calls it out.

“Five hundred forty thousand parts per million in the ground a couple feet from this tree, that’s all in the root zone, that’s what’s killed this tree,” he says.

Ackley says even when the culprit is disease, insects or storm damage, the tree could already have been weakened by methane, which deprives the roots of oxygen, and dries out the soil. Basically, the tree can’t breathe, it weakens and eventually dies.

He also wants to see how much oxygen is in the soil, which he can measure with the same machine.

“Now the oxygen level we’re breathing right now should be what?” he asks. Sadly, I don’t know.

“Nineteen to twenty-one percent or you die,” he says. “The air in the ground has the same properties as the air above ground.”

That’s about 21 percent oxygen, about 78 percent nitrogen, less than one percent argon and carbon dioxide, and water vapor. The oxygen levels should be the same in the soil. So that’s what the trees need as well. He takes a measurement.

“Well, the tree’s dead,” he says. “There’s other things that kill trees, there’s no doubt about that. But when you have gas near a tree you either have a sick tree or a weakened tree or a dead tree or no tree.”

And that he says, should encourage tree tenders to pay more attention to gas leaks.