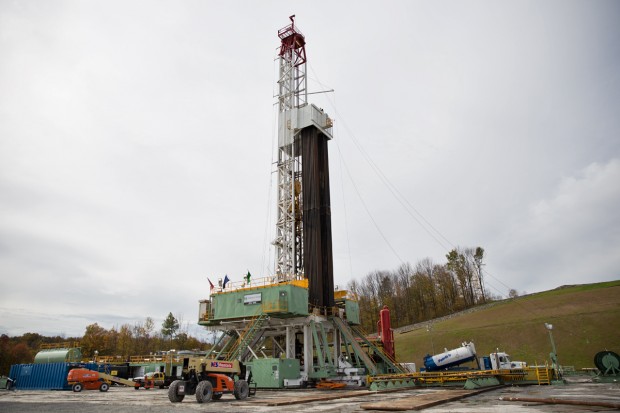 A Cabot Oil and Gas well in Northeast Pennsylvania. Production in the Marcellus Shale helped boost the country's proven gas reserves to record levels in 2014.

Nationwide, the amount of gas that producers can afford to get out of the ground, broke records in 2014, topping 388 trillion cubic feet, according to a new report from the Energy Information Administration. A big chunk of these proven natural gas reserves came from Pennsylvania’s operators, who added 10.4 trillion cubic feet of gas to 2014’s totals. For the first time, natural gas from shale formations represents more than half of all proven U.S. gas reserves.

Shale oil drillers in North Dakota and Texas contributed to the bump in proven reserves of oil, which were greater than 39 billion barrels, making 2014 the fourth highest year on record.

Fadel Gheit is an energy analyst with Openheimer. He says horizontal drilling and hydraulic fracturing as a technology drove the increased proven reserves for both oil and gas.

“We thought we could only get the low hanging fruit because we couldn’t reach the fruit at the top of the tree,” Gheit told StateImpact. “But now we have a ladder, now we have a crane. We can get anything we want.”

Steven Grape is a petroleum engineer with the Energy Information Administration.

“If you had to pick a rock that you wanted to drill in you wouldn’t put shale on the top of the list,” said Grape, “and yet our natural gas producers have chosen to do so.”

But he says proven reserves for 2015 will likely be much lower. That’s because prices have dropped, making the business of extracting that oil and gas less profitable. Those numbers won’t be released until next year.