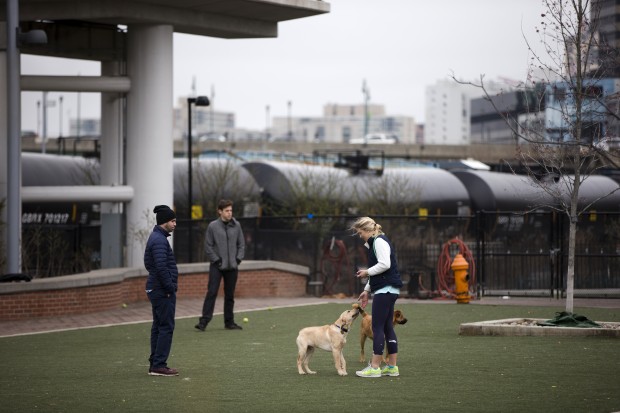 In this photo taken April 9, 2015, people play with their dogs in view of train tank cars with placards indicating petroleum crude oil standing idle on the tracks, in Philadelphia. With the drop in crude oil prices worldwide, Philadelphia area refineries are starting to take more shipments from abroad.

The drop in global oil prices means the number of black crude-by-rail tank cars may become less prominent along the state’s rail lines. Philadelphia area refiners have begun to import more crude from abroad. And oil train traffic has leveled off for the first time this fall, after rising dramatically between 2012 and the early part of 2015. Shipments from the Midwest to the East Coast peaked in March of this year at 13,336 barrels, according to data from the Energy Information Administration. But since then the flow of Bakken crude to the Delaware Valley has declined. The American Association of Railroads reports a 10.1 percent reduction in crude-by-rail during the first nine months of 2015, compared to the same time period in 2014.

Reuters recently reported that the PBF Energy refinery in Delaware City, Del., will be halting their rail shipments of Bakken crude and stepping up imports.

“We have reached cruising altitude and we are about to descend,” said Gheit. “It has been increasing every year for the last five years, now it is coming into a plateau and the EIA data supports the fact that we are seeing more demand for West African crude. It’s more competitive, it’s as simple as that.”

Two other Delaware Valley refiners, Philadelphia Energy Solutions and Monroe Energy, have increased shipments from abroad in recent months. This is after reducing crude oil imports by almost half from 2013 to 2014.

Gheit says the refiners are the winners in this equation, because domestic oil producers far outnumber the refineries.

“There is more supply than demand so the refiners are in the sweet spot,” said Gheit. “[Refiners] are in the drivers seat. …They can pick and choose. They are like 50 boys in a big dance and there are 60 girls so the boys are playing hard to get. That’s typical supply and demand.”

But the refiners weren’t always in the driver’s seat. Back in 2010, the refineries along the Delaware River, long dependent on imports from Africa, were shutting down. African crude was just too expensive. But by 2012, they were revived by the North Dakota’s Bakken shale boom, and the oil trains started rolling through town.

Tom Kloza is an analyst with Oil Price Information Service, or OPIS.

“Most of the traffic was based on the fact that Bakken was $13 or $14 or $15 below the prices you could get in the North Atlantic,” said Kloza.

But today, that price difference is much smaller, said Kloza, closer to $4 or $5. And trains are expensive. But so are ships that employ U.S. crews, which the refineries are required by federal law to use if they are transporting domestic crude by sea.

“One of the things that really hurts Philadelphia area refiners,” said Kloza, “is that if they want to take advantage of the shale oil boom, they have to invest in a Jones Act U.S flagged tanker to move it from, lets say, Texas to Philadelphia back and forth.”

But if the refiners are getting crude from overseas, they could use ships not based in the U.S., which are cheaper to operate.

That’s not to say the oil trains will disappear overnight. And more pipelines are planned to carry Bakken oil to both coasts, which if they get built could further reduce the crude-by-rail traffic.