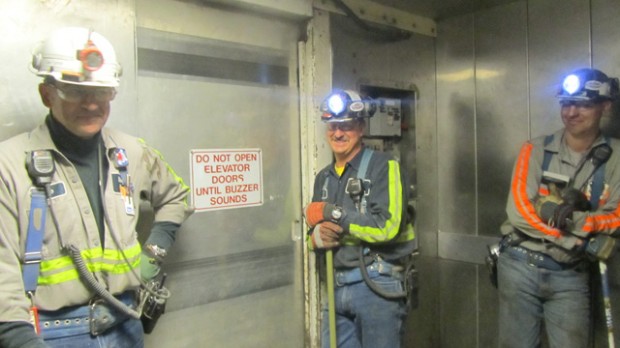 Things were already pretty bad for Pennsylvania’s coal industry, and the EPA’s new Clean Power Plan will make things worse. That’s the message from industry to a joint hearing of the state’s House and Senate coal caucuses on Tuesday.

“We talk about the perfect storm, what we are in the midst of is the perfect nightmare for coal,” said Emily Medine, a coal consultant with Energy Ventures Analysis.

Medine said the coal industry has taken a hit from low natural gas prices, which has displaced coal in electric power generation, and the new Mercury and Air Toxics Standards (MATS), which has led to a large number of domestic coal-plant closures. Since 2010, six Pennsylvania coal powered electric plants have announced plans to close.

Overseas, the strong U.S. dollar has also made coal uncompetitive, to the point where Pennsylvania coal exports have screeched to a halt. And this year’s predicted mild winter won’t help demand.

On top of all this comes the EPA’s Clean Power Plan, which was finalized in August and seeks to cut carbon emissions from electric power plants 32 percent by 2030, based on 2005 levels. It’s up to the states to figure out how to reduce their carbon emissions, or face having to implement a plan created by the federal government.

By the EPA’s own estimates, 14 to 19 percent of coal-fired power “is projected to be uneconomic” by 2030 under the plan. The agency predicts coal to slide from 36 percent of our electric generation this year to 27 percent in 2030. Coal provided 49 percent of the nation’s power in 2008.

“There’s no way to comply without reducing coal,” said Medine.

Still, Gov. Wolf says there will be a role for coal going forward. Pennsylvania is busy coming up with its own plan, while 27 states have joined a lawsuit challenging the EPA’s mandate.

But coal has faced an uphill battling competing against cheaper natural gas, which also emits less carbon dioxide when burned at electric power plants. Medine was quick to point out that natural gas, though, is hardly carbon neutral.

John Pippy, CEO of the Pennsylvania Coal Alliance, told lawmakers at the hearing that the EPA’s actions were “illegal” and outlined the legal arguments against it.

“With this rule, the EPA is attempting to transform itself from an environmental regulator to a central planning agency for states’ energy economies,” Pippy testified. “The EPA’s brazen governmental overreach is a prime example of governmental bureaucracy run rampant. This power grab by the EPA has been challenged in the courts and there is a good chance that it will be found wanting.”

But the EPA says regulating carbon dioxide through the Clean Air Act will stand up to court scrutiny. The Supreme Court, in a landmark decision in 2007, Massachusetts v. EPA, ruled that the EPA was obligated to regulate greenhouse gases.

Joe Minott, from the Clean Air Council, says the Supreme Court has stated clearly that if the EPA determines greenhouse gases to be a danger to public health, the agency has both the authority and the duty to regulate.

“[The EPA] would have been sued by environmentalists and public health organizations if they had not implemented the Clean Power Plan,” Minott told StateImpact.

Pippy, from the Coal Alliance, testified that President Obama had manipulated issues surrounding the health impacts of greenhouse gases.

“In an attempt to justify the cost of compliance,” testified Pippy, “and make the issue relevant and relatable across the country, President Obama and the EPA have spun a public relations campaign linking climate change to an issue that hits many Americans close to home; asthma.”

“So there is no doubt that even if you were to look at this in terms of traditional pollutants that cause smog and that emit particulates,” said Minott, “this is going to have an amazingly positive impact on public health. It is patently ridiculous to suggest that lowering greenhouse gas emissions will not have a positive impact on asthma.”

Scientists and public health professionals say a warming planet will have impacts on public health in the form of heat related deaths, increased ground-level ozone that will aggravate asthma, as well as longer allergy seasons, increased pollen concentrations and molds.

The coal caucuses also heard from those who work in the industry. Walter Schroth owns Schroth Industries, a third generation wood treating business that depends on serving the coal industry. Schroth said he employs 10 full timers and several part time workers, and he’s worried what the decline in the coal industry will do to small businessmen like him.

“While I had hoped for additional business opportunities in the natural gas industry,” testified Schroth, “most of their rigs have now left Indiana County and are in Ohio. As a case in point, the relocation of Halliburton’s operations to Ohio and the subsequent loss of several hundred jobs in the local area, give me little comfort that any other industry could replace the volume of lumber and treated timber that the coal mines have historically used.”

It’s unclear what will happen to people like Schroth once the Clean Power Plan is enacted. The Clean Air Council’s Minott says he is sympathetic.

“We do have an obligation to work with people employed in that industry and ensure they have a soft landing,” he said.