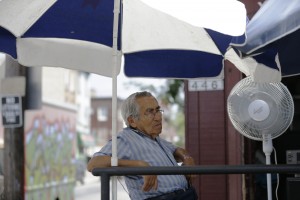 Amalio Medina sits in front of his un-air conditioned shop in the midday heat, Thursday, July 18, 2013, during a heat wave in Philadelphia. Pennsylvania’s new Climate Change Assessment predicts more hot days like this one.

Prepare for longer, hotter summers, more rain, more destructive storms, and bankrupt ski resorts. That’s the conclusion of a team from Penn State on what Pennsylvanians can expect from climate change. By 2050, Philadelphia temperatures will be more like Richmond, and Pittsburgh will be like Washington, D.C. In fact, Pennsylvania has already warmed by 1° Celsius since the early 1900’s, and the future looks even hotter and wetter.

“The findings of this assessment report are stark,” said DEP Secretary John Quigley on a call with reporters. “The entire state will experience the effects of climate disruption. I personally find this report profoundly disturbing. Science is showing us that we are not only changing and disrupting our climate significantly, but these changes are occurring alarmingly fast.”

The Pennsylvania Climate Impacts Assessment Update estimates that just 35 years from now, the average temperature in the state will be 3° Celsius, or 5.4° Fahrenheit, warmer than it was in 2000.

That’s 2° C higher than what climate experts and policy makers say is the threshold for dangerous impacts. A global average temperature rise of 2° Celsius above pre-industrial levels is considered the tipping point for catastrophic change.

“That is a startling number,” said Dr. James Shortle, lead author on the report.

Shortle says the 3° C figure, which is based on continued rates of rising present-day CO2 levels, stems from new information released by the most recent report of the Intergovernmental Panel on Climate Change. IPCC scientists predicted that without significant reductions in CO2 emissions, global climate change impacts would be “irreversible” by the end of this century.

“So if these patterns of population growth and economic development continue,” said Shortle, “the climate models would suggest that we’re going to look at about a 3° C increase in our temperature, or 5.4°F by middle of this century. This is a very significant new piece of information in the report.”

Shortle says precipitation would increase by 8 percent annually, and 14 percent of that would be in winter. There are some benefits. Pennsylvania would have a longer growing season, and minimal risk of drought. The flip side of that of course, is an increased risk of flooding, threatening both urban and rural infrastructure.

Although Pennsylvania’s climate is also influenced by longstanding global climate patterns like El Nino, Shortle says there is a visible trend.

And Shortle says the warming is caused by humans.

“You can only explain this change in Pennsylvania’s climate over the past 100 years if you include greenhouse gas emissions from humans,” he said.

The impacts could be mixed. For example, longer growing seasons could improve crop yields, but the warming may slow down milk production in the dairy industry.

While the growing season expands, the ski season will shorten. Snow cover is expected to decline by 20 to 60 percent, with the state unable to support winter sports at all by mid-century. 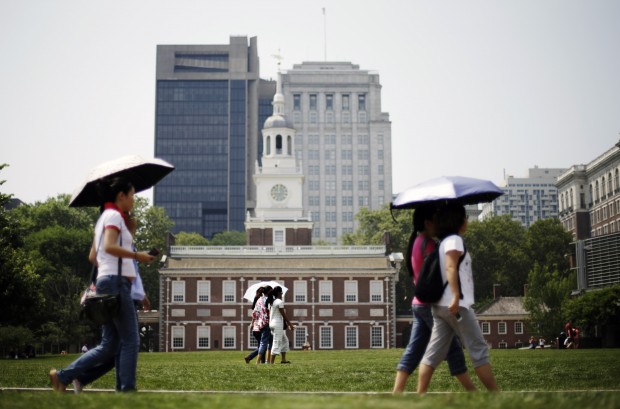 Tourists shield themselves with umbrellas in front of Independence Hall on Friday, July 19, 2013, in Philadelphia. The latest Pennsylvania Climate Change Assessment predicts a 3° Celsius rise in average state temperatures by 2050.

The report also says that although energy consumption will decrease in the winter months, the amount of energy needed to cool buildings in the summer months will increase, and outpace the savings of warmer winters.

Shortle says one conclusion from the report is that vulnerable populations like the elderly and the poor, will suffer more from climate change.

He says human health impacts from air pollution will increase, and water quality will suffer from increased run-offs, and increased temperatures.

“When we look out our windows or when we drive along the highways in Pennsylvania, in the future we will see a different landscape than what we see today,” he said.

But state officials stopped short of recommending any kind of action.

John Hanger, Pennsylvania’s Secretary of Planning and Policy, said he didn’t want to answer any questions about policy. 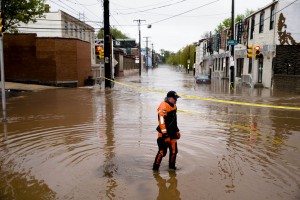 Marine unit police officer Robert Jonah walks through flood waters from the Schuylkill River on Main Street, Thursday, May 1, 2014, in the Manayunk neighborhood of Philadelphia. Global warming is rapidly turning America into a stormy and dangerous place, with rising seas and disasters upending lives.

“I know that there’s a wonderful desire to broaden the conversation but there’s still a lot of public confusion about the science and about what the impacts are,” said Hanger. “This report is speaking to the science and it is not a policy report.”

Still, both the authors of the report and DEP Secretary John Quigley approached the findings with a sense of urgency.

Although Quigley would not discuss policy, the report does seem to recommend areas of concern. In the section on energy, it questions whether the state’s cheap natural gas will be developed at the expense of alternative energy sources like wind and solar.

DEP is required by law to produce a report on the potential impacts of climate change in the state over the next century. The first report was published in 2009, and this assessment is the second update to the original.

Public comments on the report, including suggestions for mitigation and adaptation, will be accepted until November 4.

DEP plans to produce a fact sheet to help Pennsylvanians digest the often complex science included in the 200-page report.