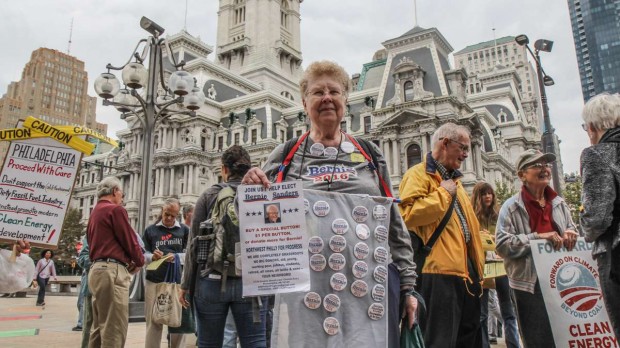 While business interests in Philadelphia are pushing a vision for the city as an “energy hub,” a coalition is coming together to fight that plan.

The new coalition, called Green Justice Philly, includes 20 community organizations and environmental groups that want to halt the expansion of the city’s fossil fuel industry and urge local action on climate change. The group launched with a rally near City Hall Thursday as supporters carrying banners chanted, “Philadelphia is not a sacrifice zone.”

Their enemy number one: Philadelphia Energy Solutions. It’s the largest oil-refining complex on the East Coast and sits along the Delaware River. The company’s CEO, Phil Rinaldi is one of the architects of the energy hub plan, which involves bringing cheap natural gas from the Marcellus Shale via pipeline to lure new manufacturers to the Philadelphia region and the middle-class jobs that come with them.

Rinaldi has told StateImpact Pennsylvania previously that he wants to expand refinery operations to process shale gas and create new products, such as agricultural fertilizer.

“And we know that this is wrong,” said Tracy Carluccio, deputy director of the Delaware Riverkeeper Network.

Carluccio explained Green Justice Philly is targeting PES because of its history as the city’s biggest emitter of air pollution. According to the Environmental Protection Agency, the company is responsible for more than 70 percent of toxic emissions in Philadelphia County and has been in “significant violation” of the federal Clean Air Act for the last three years.

Green Justice Philly sent a letter Thursday to Philadelphia’s city council asking the 17 members to consider legislation that would prevent “serious violators of air and water regulations from expanding by obtaining new permits from the city.”

“If they don’t have permits, they can’t expand,” said Carluccio.

Right now, PES does not have any permit applications before city agencies related to expanding operations at the refinery. Organizers say that’s why Green Justice Philly’s first move is reaching out to City Hall, in hopes of halting expansion before it starts.

As the city looks to elect a new mayor next month, the coalition is also pushing city council to increase investments in renewable energy, energy efficiency and training for workers to transition out of the fossil fuel industry.

Jane Roh, a spokeswoman for Council President Darrell Clarke, said he had received the letter.

“Council has demonstrated time and again its commitment to job creation and a healthier city, and welcomes input from residents and organizations that share these goals,” Roh said.