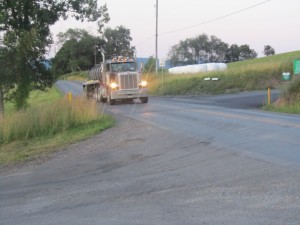 A truck hauls waste water from a drill site in Susquehanna County, Pa. A new study suggests policy makers should focus on transport and storage of waste water to avoid water contamination.

Contaminants related to shale gas production found in well water in Northeast Pennsylvania likely results from surface spills and leaks, rather than fluid migrating up from fracked wells, according to a new study published this week in the Proceedings of the National Academy of Sciences.

The study also found a correlation between detectable hydrocarbons and proximity to shale gas wells that had been cited by the  Pennsylvania Department of Environmental Protection for health and safety violations.

“Our data is telling us that [the hydrocarbons] are coming from the top down,” said Brian Drollette, lead author on the study and a graduate student at Yale University’s chemical and environmental engineering department. “It’s probably resulting from surface spills near the hydraulically fractured sites.”

The team, led by researchers at Yale University, wanted to find out if there were any detectable levels of hydrocarbons associated with hydraulic fracturing in residential water wells, or if there were some other natural sources of contamination. Methane migration has been linked to poor well casing, but natural sources of methane can also be present in aquifers. 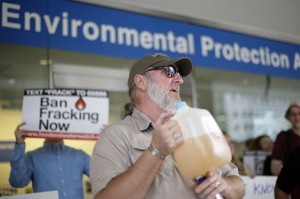 Paul Ziemkiewicz, director of the West Virginia Water Research Institute and who was not involved in this research, says it’s a “good, sound study” that adds to the growing body of literature about the impact of shale gas drilling on water quality.

“I don’t think too many people have looked at the actual migration pathways of organic compounds,” said Ziemkiewicz.

He’s conducted his own research, and says the link to surface spills, rather than upward migration of frack water, confirms his own study conclusions.

“That’s what I’ve been saying for the past five years,” said Ziemkiewicz. “My point has been all along that it’s mainly surface spills and illegal transport and dumping that are responsible for most of the contamination. And migration from the actual Marcellus level up to the surface is extremely unlikely.”

The researchers ruled out frack water migrating up into the aquifer in part because they didn’t find any evidence of brine, the salty water that exists deep below the surface and would be present if there was an upward pathway from the deep shale formation. They also eliminated leaks from underground storage tanks. But they did find a fracking signature, a chemical additive used in the hydraulic fracturing fluid. The research also did not detect any methane in the water samples, another indication that surface spills likely resulted in hydrocarbons showing up in drinking water.

“We saw a statistical correlation between levels of organic compounds and the distance to the nearest shale gas well,” said Drollette. “We also noted a statistical correlation between those organic compounds and gas wells that have had an environmental health and safety violation as documented by the Pennsylvania Department of Environmental Protection.”

Sue Brantley, director of the Earth and Environmental Systems Institute at Penn State University, co-authored a report back in May that found evidence of a connection between gas drilling and water contamination that occurred in Bradford County in 2010. Brantley was not involved in this research and says more evidence should be produced to definitively link the hydrocarbons in water samples to gas drilling, rather than another source.

“They did some extraordinary analyses, really difficult analytical chemistry in a small number of samples and I’d like to see it reproduced with a much larger data set to really draw firmer conclusions,” said Brantley.

Desiree Plata, an associate professor of chemical and environmental engineering at Yale University and co-author of the study says the findings that the contaminants come from the top down, rather than the bottom up, are helpful.

Plata also says not all shale plays are equal. Some may not have such a strong layer of rock, referred to as a “confining layer,” that keeps the fluid from migrating upward. She also says regarding the longterm impacts of fluid migration, those subsurface geological formations could change. So it’s still unknown what could happen hundreds of years from now.