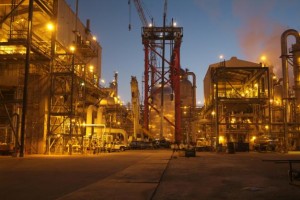 After years of competing against one another to land big petrochemical projects powered by their growing natural gas industries, Pennsylvania, West Virginia and Ohio announced Tuesday they would work together to market and develop their region as a center for shale-related manufacturing.

The states announced a three-year cooperation agreement at the Tri-State Shale Summit in Morgantown, West Virginia.

The states say they will organize conferences to share best practices for economic development around shale gas and related manufacturing, develop workforce development programs, and market the region to petrochemical and other industries that can use shale gas for manufacturing.

“We must work together to ensure our region has the skilled workforce necessary to fill jobs and attract new employers,” Pennsylvania Gov. Tom Wolf said. “The demand for workers by the energy industry and off-shoot industries, especially manufacturing, is high and still growing.”

All three states have vied with one another in recent years for petrochemical projects that would use natural gas from the Marcellus and Utica shales.

Shell Chemical is considering building an ethane cracker in Beaver County, Pennsylvania, west of Pittsburgh, where it would make the building blocks of plastics out of locally produced natural gas.

In 2012, Shell announced it chose Pennsylvania as the site for the project after securing a fifteen-year tax amnesty window and a $1.65 billion tax break for using natural gas from Pennsylvania-based natural gas drillers.

In West Virginia, a pair of Brazilian companies have announced interest for an ethane cracker in Parkersburg, W. Va., though those plans may be jeopardized by low oil prices.

In Ohio, a Thai company is considering a site in southeastern Ohio to build an ethane cracker.

“This is a critical step toward demonstrating that our tri-state region is ready, willing and able to make business investment a win-win for the region and for the firms – large and small – that have operations in the new global petrochemical center that is the Appalachian Basin,” said West Virginia Gov. Earl Ray Tomblin at the event.

Jeff Sheridan, a spokesman for Gov. Wolf said he didn’t believe the agreement would have an additional budgetary impact in Pennsylvania. Wolf said he is trying to expand funding for workforce development initiatives that could benefit the workforce in the region.

As part of the agreement, the states would work together to support infrastructure like pipelines, railroads, and roadways critical for shipping natural gas and related products. In addition, they will encourage state-supported universities to collaborate on research to find appropriate end uses for natural gas products. They will also collaborate on preparing for emergency response, promote recycling and environmentally friendly practices in the industry, as well as support entrepreneurship.