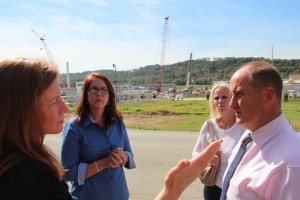 Kevin Hollinrake meets with members of the Mars Parent Group, which opposes fracking near schools.

On a sunny fall morning, Kevin Hollinrake stands with a group of concerned parents across a road from a gas processing plant in Butler County. Trucks come and go as workers hustle to expand the Bluestone processing plant, which will separate different types of natural gas from locally drilled wells for market.

Hollinrake has come a long way to watch this Butler County construction site. He is a member of the British Parliament and a Conservative from a district in northern England. A company has applied to utilize fracking for natural gas in his district. Hollinrake traveled more than 3,500 miles to visit Pennsylvania—where more than 8,000 wells have been drilled since 2008—to see the fracking process firsthand. He wants to know what it’s like to live near a gas drilling site.

The people he’s touring with today, the Mars Parent Group, are worried about fracking near local schools in Butler County. They’ve been battling with local officials to prohibit drilling within two miles of schools in the area.

They tell Hollinrake they’re worried about the smells they say emanate from the plant. (State records show the facility has had no air quality violations.) They’re standing in the driveway of a suburban-style house that’s now right across the street from what is essentially a small refinery. The plant was opened last year and is already undergoing an expansion.

The plant is also near a landfill. One parent, Amy Nassif, asks where he would put a facility like this in his country. “I have no idea,” he says with a chuckle. “Not near my house.”

Hollinrake is the latest European to look to Pennsylvania as an example of what works and what doesn’t work when it comes to hydraulic fracturing.

More than 40 countries around the world have shale gas deposits. But many countries, especially in Europe, are approaching hydraulic fracturing with ambivalence. 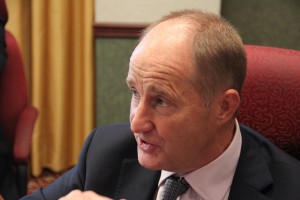 Right now, the United Kingdom is debating whether to allow fracking. Francis Egan, the CEO of the British energy company Cuadrilla, used Pennsylvania’s example as a reason for allowing fracking in the U.K. England has drawn interest from the oil and gas industry for its potentially rich shale gas resources, but only a few test wells have been drilled so far.

The country’s Bowland Shale could contain 1,300 trillion cubic feet of shale gas, though the amount that could be recovered from it could be much lower.

Fracking has the support of British Prime Minister David Cameron, who says it could lower energy bills and reduce the need for foreign imports. But intense political debate over the issue has so far prevented companies from fracking in Great Britain.

Hollinrake says he came to the U.S. to get the bare truth on fracking. “We’ve tried to see the worst of it, as well as hear the best of it,” he says.  “And I think in Pennsylvania, you’ve seen certainly the worst of it.”

He started his trip in Dimock, the town where a state investigation found more than a dozen water wells were contaminated from gas drilling.

He also met with the Marcellus Shale Coalition, an industry group, and with the Pennsylvania Department of Environmental Protection. He says state regulators he met with admit that in the early days of the shale gas boom, they were playing ‘catch-up’ with the industry.

“I think they certainly accepted things had gone wrong,” he says. “They were wet behind the ears when this all first started, and they’ve learned an awful lot. It was—it sounds—almost like the ‘Wild West’ here when fracking started in 2008.”

DEP spokesman Neil Shader says in response: “I would disagree with the ‘things had gone wrong’ part. There were certainly lessons learned, and DEP adjusted or is adjusting our regulations as a result.”

Hollinrake says what has shocked him the most is that, in Pennsylvania, people generally don’t get much say in deciding whether companies can drill near their homes. He notes that in England, local planning boards are required to consider how new industries will impact people and neighborhoods.

“[We] look at factors about noise, light pollution, traffic. That doesn’t seem to be forming part of the analysis about a permit [in Pennsylvania], which I find incredible,” he says. 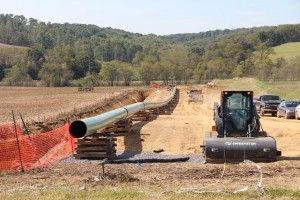 A pipeline under construction in Butler County, Pa.

Though its regulations may be different, Pennsylvania has grappled with some of these issues. Recently the state tried to address noise in drilling, but the latest re-write of its oil and gas law does not include a proposal to limit noise. The state Supreme Court also ruled that municipalities can enact zoning laws that can keep drilling out of some residential areas. Some municipalities have done this. Cecil and South Fayette townships, suburbs of Pittsburgh, enacted zoning that would confine drilling to a handful of areas.

Hollinrake says his district in England is similar to Pennsylvania, in that it’s a mix of agriculture, tourism and industry.

His wife, Nicky, says as a mother, coming to Pennsylvania was important. “We’re both parents of four children, so it’s quite important we get a safety angle on this,” she says.

On Hollinrake’s final tour stop, the concerned parents’ group takes him to a dairy farm where crews are installing a pipeline. They want him to understand that once fracking starts, pipelines are the next step in creating a natural gas economy. They worry about risks like pipelines ruptures, but he says they aren’t unique to fracking. Hollinrake is sympathetic to these parents. But the Conservative British MP also sees a benefit for his country in shale gas.

“In the past, we have undertaken large engineering projects—things that have taken our economies forward over the last hundreds of years,” says Hollinrake. “And if we had waited every time until we’d established there’d be no risk, we probably wouldn’t have done anything.”

At the end of the tour, Hollinrake gets into his rental car. He has a flight to catch back to England—and a lot to think about.