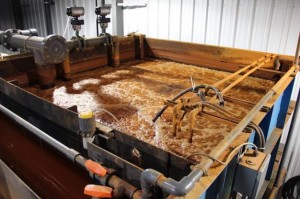 Mine water gets treated at the Blue Valley AMD Treatment Center, near Brockway, Pa. Treated mine water can be used to hydraulically fracture wells.

Gov. Tom Wolf signed into law Thursday a bill that could clear the way for more oil and gas companies to use treated mine water for fracking.

The idea has been encouraged by the state Department of Environmental Protection, but there have been relatively few companies using the water to frack. Drillers have been reluctant to use the treated minewater because of concerns over liability.

The way the law is written, drillers won’t worry that if they use any part of a mine’s discharge, the state’s Clean Streams Law could make them liable for all water in the mine, even polluted discharge they’re not using.

The new Act 47 clarifies this issue, says State Sen. Camera Bartolotta (R-Greene County), the bill’s sponsor. Under the bill, a fracking company only assumes responsibility for the water it takes out of the coal mine.

Gov. Tom Wolf spokesman Jeff Sheridan said the law could help clean up mine drainage in Pennsylvania. Abandoned mine drainage has polluted 5,000 miles of streams in the state.

Using mine water for fracking was one of the recommendations from former Gov. Tom Corbett’s Marcellus Shale Advisory Commission as an environmentally friendly measure.

In 2013, the Department of Environmental Protection issued a “white paper” to promote the practice.

But environmentalists aren’t pleased with the new law. A coalition of environmental groups wrote a letter to Gov. Wolf urging him to veto the measure. Tracy Carluccio, of the Delaware Riverkeeper Network said the bill would lead to a “raid” on the water from coal-mining impacted watersheds.

“Even though that water is not pristine–it’s still treated to a certain level and kept in that watershed,” Carluccio said. “Those streams will never have the ability to be restored to health because they will not have the flow to sustain life.”

Another concern of the environmental groups is the “letter of the law”. Carluccio says her group’s attorneys think the law could be interpreted to mean that fracking companies could also use untreated minewater to frack. But Sen. Bartolotta says that’s neither the intention nor the correct reading of the legislation.

Bartolotta said she sponsored the bill so that fracking companies, who can use 4.4 million gallons of water to hydraulically fracture a single well, would use less water from cleaner rivers and streams. All environmental laws pertaining to spills and leaks still apply to the water.

“Now the gas and oil industry doesn’t have to take that freshwater out and use it in fracking–to me it’s a win for the environment,” Bartolotta said.