How the Trans-Pacific Partnership could impact LNG exports 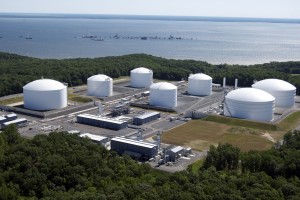 The U.S. is expected to become a net energy exporter over the next 15 years. This photo shows Dominion Resources Cove Point terminal in Maryland. It is currently being converted from a gas import facility to an export terminal to ship Marcellus Shale gas to Asia.

The U.S. has negotiated a trade deal with 11 countries that has environmentalists worried about more liquefied natural gas exports. The Trans-Pacific Partnership looks to remove trade barriers with Asia. And Asia, specifically Japan, is eager for more natural gas from the United States.

If the agreement gets through Congress, it would remove the role the Department of Energy plays in deciding whether or not its in the public interest to export LNG to those countries included in the trade agreement. The Federal Energy Regulatory Commission has the task of permitting the LNG operations, but the DOE has to approve exports. So far, the DOE has sanctioned five new export facilities sending gas to countries that do not have free trade agreements with the U.S., including Dominion’s Cove Point terminal in Lusby, Maryland. Once the Cove Point plant is completed, it’s expected to send Marcellus Shale gas to Japan and India.

The Sierra Club has been fighting against these export facilities. Along with other environmental groups it argues that upstream impacts from increased production need to be considered by FERC. They say exports are not in the public interest. And as nations across the globe work to reduce greenhouse gas emissions, environmentalists say encouraging fossil fuel exports undermines those efforts.

The Sierra Club sees the Trans-Pacific Partnership (TPP) agreement as providing a fast track to future LNG exports, removing one avenue of resistance.

“The Trans-Pacific Partnership would take away the ability to even examine whether exports are in the public interest and remove the ability of the DOE to even weigh this question,” said Ilana Solomon, director of the Sierra Club’s responsible trade program. “It takes away the ability of the U.S. to even be able to make thoughtful decisions about our energy future. The Trans-Pacific Partnership ties our hands in a way that right now, they are not tied.”

But with the DOE already approving the export of more 10.5 billion cubic feet of natural gas a day, it’s not clear that the TPP will have an immediate impact on spurring the growth of future LNG export facilities. At least not in the short-run, says Erica Bowman, chief economist for America’s Natural Gas Alliance.

“The impact is minimal, mainly because you have a lot of volume already approved [for export] to non-free trade agreement countries,” said Bowman.

In the longterm though, Bowman says that if the demand is high enough from the countries that participate in the TPP, which would most likely be Japan, new export facilities would have the advantage of not having to seek trade approval from the Department of Energy.

The big incentive for countries like Japan seeking natural gas imports from the U.S. is that it breaks ties with the oil market. Contracts for natural gas from Australia, Indonesia or the Middle East had traditionally been linked to the price of oil, and by purchasing U.S. gas, which is not tied to oil prices, Japanese utilities would save money. But with the price of oil so low, that changes market dynamics for now.

“It’s a hard sell given where oil prices are today,” says Bowman. “When oil was $100 [a barrel] or more, you had a significant price reduction. U.S. gas was cheaper even when you [factored in] transportation and re-gasification costs. There’s an expectation that oil prices will climb again, maybe they won’t get up to $100 [a barrel], maybe $80, and you would still see opportunity there. So overtime you might see the U.S. has opportunity [to export more] than what has already been approved. But that’s a longer time frame.”