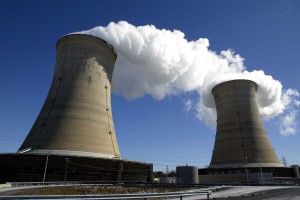 The Clean Power Plan was a “missed opportunity” to ramp up the nation’s largest source of zero-carbon power, a group of nuclear industry leaders said Wednesday.

Nuclear power represents about 20 percent of the country’s electricity generation, but plants face tough times making money these days. Exelon, the country’s largest nuclear power plant operator, admitted recently that several of its power plants in Illinois were losing money, and it may have to close two of them. Plants in Vermont, Florida, Wisconsin, and California have closed in recent years.

The causes of the industry’s woes are twofold. Increased regulation stemming from the Fukushima disaster in Japan has pushed up operating costs, while cheaper natural gas has driven down the price of electricity.

Nuclear remains the country’s top source of zero-emissions power, but industry leaders at the “Nuclear Matters” conference in Pittsburgh this week said they were disappointed in the EPA’s Clean Power Plan, the Obama Administration’s landmark carbon regulation for the power sector.

The plan set carbon emissions reduction goals for power plants in individual states. Pennsylvania must cut its power plant generated carbon emissions by roughly 33 percent by 2030, based on 2012 levels. The nuclear industry had hoped the Clean Power Plan would help boost their bottom line. An initial version of the CPP gave states credit for keeping existing nuclear power plants in operation, but the final plan nixed that allowance.

That was a mistake, groused Maria Korsnick, Chief Operating Officer of the Nuclear Energy Institute, an industry lobbying group.

“I think there was a missed opportunity quite frankly for (existing plants) to not be recognized,” Korsnick said. She predicted that it may lead plants to decide to close rather than apply to be re-licensed, a process which can cost up to $500 million. “In today’s market with nuclear plants being challenged, you’re not going to go to your board of directors if you’re having a hard time as it is and say ‘Let’s invest more.’”

She says another problem for nuclear energy is that the Clean Power Plan ends in 2030, right around the time when a significant number of plants are scheduled to be de-commissioned. “We could create a dynamic where we could be closing plants (after 2030) and really undoing the value that was created by the Clean Power Plan,” Korsnick said.

The plan allows credit for expanding, or “uprating” operations at existing plants, but Korsnick said there wasn’t much room for growth in the U.S. nuclear fleet. 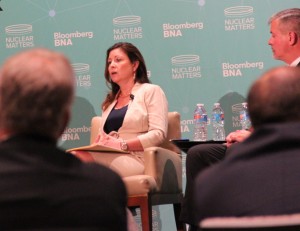 Maria Korsnick of the Nuclear Energy Institute speaks at a nuclear conference in Pittsburgh.

Five nuclear power plants are under construction in the U.S., all in the Southeast. The energy the new plants create will count toward their states’ Clean Power Plan goals.

Industry executives complained about the competition from cheap natural gas, and about a suite of new regulations, imposed by the Nuclear Regulatory Commissions after the the 2011 meltdown at the Fukushima Daiichi Nuclear Power Plant in Japan.

“With the current market as it exists now, we are competing, but we’re not winning,” said Sam Belcher, President and Chief Nuclear Officer for FirstEnergy Nuclear Operating Company, which operates three plants in Ohio and Pennsylvania.

“The wind industry has received certain production tax credits, and that gives it a very competitive edge (over nuclear) in markets” like Pennsylvania, Gadomski said.

Larry Lindsey, a former economic policy assistant to George W. Bush and a speaker at the event, said the industry also suffered from the public’s and politicians’ “irrational fear” of the industry. He cited former Senate majority leader Harry Reid’s opposition to a plan to ship and store nuclear waste at Yucca Mountain in Reid’s home state of Nevada. The plan was scrapped, preventing a fix to the dilemma of what to do with nuclear waste.

“That was an example of short-term politics,” he said, “and an example of a very powerful man getting in the way of a long-term solution.”

Still, Lindsey said, he sees nuclear as a long-term solution in a carbon-constrained world. “If you have to hit a target and nuclear is a zero-emitter, it certainly is a path of least resistance.”