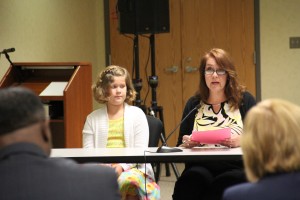 Amy Nassif, of Mars, Pa. testified at an EPA hearing on methane with her daughter, Julia.

Supporters and opponents of the EPA’s proposed methane rules gathered in Pittsburgh Tuesday for a hearing on federal efforts to cut methane emissions from oil and gas production.

Methane is up to 84 times more effective at trapping heat in the atmosphere than carbon dioxide over a 20-year period. The oil and gas industry is the country’s largest single source of methane emissions.

In September, the EPA proposed the first federal rules to keep methane from oil and gas out of the atmosphere. The proposed rules are part of a plan that would reduce the industry’s pollution by up to 45 percent.

The rules would also require operators of compressor stations to use ‘low-bleed’ control systems that release fewer emissions, and require plant operators to replace equipment more often, in order to prevent methane from escaping through leaky seals.

The EPA focused on well pads and compressor stations, Cozzie said, because they are constructed with equipment that allows methane to escape into the atmosphere. Studies have found that “super-emitters”–a relatively small number of leak sources–may produce the majority of methane pollution from the oil and gas industry.

“There’s been lots of literature out there about these super-emitters, which are sites that have large emissions and they tend to be associated with well sites and compressor stations,” Cozzie said.

The proposed rules would reduce methane pollution by 400,000 tons per year by 2025, the EPA said — the equivalent of removing 1.8 million cars from the road.

The oil and gas industry says the rule is costly and unnecessary. The EPA estimates the regulations would cost between $320 and $420 million in 2025. The agency says the costs would be outweighed by benefits to the public in the neighborhood of $450 to $550 million, which would come largely from reductions to climate changing greenhouse gases.

Matt Todd of the American Petroleum Institute said the industry has already been slashing emissions of methane — the main component of natural gas — for decades. Even as the country has entered an oil and gas drilling boom, Todd said emissions of methane from the industry have declined 11 percent since 2005, and 79 percent in that period from hydraulically fractured wells.

Todd says the reason for the drop is simple–it’s good business, because methane is the product that natural gas drillers sell.

“Our industry has voluntarily led the way in its pursuit of improved operations,” he said. “What our industry has and will continue achieve…dwarfs the emission reductions EPA has estimated in these proposed rules.”

Todd said the real cost of the regulation might not even be the insistence on purchasing new equipment.

“Maybe the bigger concern is the record-keeping burden,” said Todd. “When you’re talking about having a company with thousands of wells in a basin…that can be a really big burden just to do the record-keeping.” 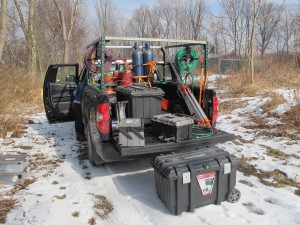 The rule is the first attempt by the EPA to regulate methane, a colorless, odorless gas that is benign to humans but potent at trapping heat in the atmosphere. Colorado became the first state to clamp down on methane emissions from the oil and gas sector last year.

The question of how much methane is leaking out of the oil and gas system in the U.S. has spurred scientists to track methane in gas-producing areas across the U.S.

Environmental groups applauded the EPA’s proposed rule as a ‘first step’ toward minimizing the climate impacts of the country’s fracking boom, and toward cleaning up air around oil and gas wells.

Gretchen Dahlkemper, national field director for the Mom’s Clean Air Force, came to the Pittsburgh hearing from Philadelphia because she has a child with asthma. She said the new rule not only will slow down climate change, but it will prevent the release of volatile organic compounds–chemicals found in oil and gas that can produce smog.

“The leak detection and repair you’d put in place (to comply with the rule) will also curb the emissions of other chemicals that are being released into the air,” Dahlkemper said.

Dahlkemper said she would like to see the rule extend to the hundreds of thousands of existing oil and gas wells across the U.S.

The call to regulate existing wells was echoed by several speakers who appeared before the EPA panel at the William S. Moorhead Federal building in Pittsburgh.

Pennsylvania state regulators called for the EPA to issue stronger rules on methane. Mark Gorog, Pennsylvania Department of Environmental Protection’s (DEP) regional manager for Air Quality called on the EPA to include in its rule more aspects of the drilling process — including the pipe-cleaning, or “pigging.”

DEP secretary John Quigley has said the state will look into sources of methane from existing infrastructure, including abandoned wells.

EPA will take public comment on the proposed rule until November.