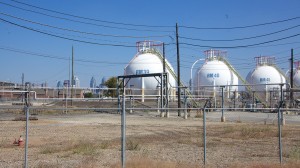 Philadelphia Energy Solutions is the largest oil refining complex on the Eastern seaboard. Half of all Bakken Crude traveling across the country by rail ends up at the PES plant. It's also one of the largest contributors to hazardous air pollutants in Philadelphia.

Oil refineries will have to curb toxic air emissions under new rules announced Tuesday by the Environmental Protection Agency. The new regulations will also give neighboring residents more information about potential pollution exposures.

For the first time, fence line pollution monitors will be required, and oil refiners will have to disclose the pollution in a publicly accessible database. EPA Administrator Gina McCarthy says monitors placed on the fence lines of the facilities will be able to detect carcinogenic toxins like benzene.

“This rule creates a kind of neighborhood watch for refinery pollution,” McCarthy said in a call with reporters. “Families along the fence lines will not just know what’s coming out of the stacks of these facilities they’ll know if toxic emissions are coming across their fence line.”

Hazardous emissions from refineries can cause respiratory illnesses and increase the risk of cancer. Much of those emissions occur during shut-downs and start-ups, or unplanned emergencies where the refinery has to vent for safety reasons. The EPA says these rules will eliminate flares and “upset emissions events.”

The U.S. has 142 oil refineries and four of those are in the Philadelphia area. Philadelphia Energy Solutions is the largest refiner on the East Coast, and processes half of all the crude coming out of the Bakken Shale in North Dakota.

“[PES] is the single largest contributor to hazardous air pollutants in Philadelphia,” said Clean Air Council executive director Joe Minott. “It is surrounded by mostly low income neighborhoods and those people are at risk for a higher range of environmental impacts.”

Minott praised the new rules but questioned why the EPA did not install “real time” monitoring devices.

“I am disappointed the EPA didn’t require the best type of fence line monitoring which would give community members real time monitoring,” he said. “The canisters have to be sent to a lab and you would get the information two weeks later.”

Although the EPA acknowledged the required monitoring won’t give an instantaneous read out during an emissions event, the agency says the technology was chosen for its ability to detect benzene at very low levels.

“These requirements provide a significant opportunity to prevent pollution from being emitted, which is great for public health and the environment,” said EPA Administrator McCarthy. “But it will also lead to refinery operations that are more efficient and refineries that are better neighbors.” 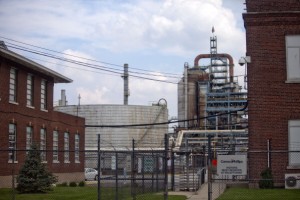 The EPA says 6.1 million people live within three miles of a refinery. Low income and minorities are twice as likely to live near one of these highly polluting facilities. The refineries in the Philadelphia area, including Monroe Energy in Delaware County; Philadelphia Energy Solutions in southwest Philadelphia; PBFEnergy in Paulsboro, New Jersey and the Delaware City refinery in Delaware City, Delaware all operate in densely populated areas and are a large reason the Philadelphia region is not in attainment with National Ambient Air Quality Standards.

The rules, set to be implemented by 2018, will cut emissions of volatile organic compounds by 50,000 tons each year, which the EPA says will help reduce refinery associated cancer incidents by 15-20 percent.

The American Petroleum Institute says the final rules are better than earlier proposals, but says it will cost the industry $1 billion dollars to implement.

“Despite these improvements, regulators need to be thoughtful about the additional impacts of new regulations and added costs to delivering affordable energy to U.S. consumers,” said the API’s Bob Greco in a statement. “Companies have already spent billions of dollars to reduce emissions by installing flare gas recovery and flare minimization systems to reduce greenhouse gas emissions, and air quality continues to improve as a result of these voluntary programs and existing regulations.”

The EPA says the new rules will cost the industry $63 million. Neither Philadelphia Energy Solutions, nor Monroe Energy responded to requests for comment.

Gas developers urged to be transparent in applications to municipalities