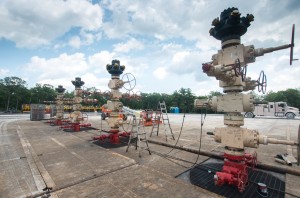 Methane emissions from natural gas transmission facilities like these would be cut under new federal regulations.

Environmentalists on Tuesday called on Pennsylvania to act to reduce methane emissions from existing natural gas infrastructure and build on proposed federal standards that would cut emissions of the gas from new and modified plants.

Natural gas companies say they already have made strides to cut the emissions and called the new federal proposal unnecessary.

Environmental advocates welcomed the federal plan as a step in the right direction but said it would not address the majority of the industry’s methane emissions.   Those come, they say, from existing oil and gas production facilities, such as those in Pennsylvania’s Marcellus Shale.

“The rules will not tackle the thousands of tons of methane pollution currently leaking from Pennsylvania’s expansive gas industry because they will only apply to new or modified gas facilities, while expecting voluntary cooperation from operators of existing sources,” said Joseph Minott, executive director of the Clean Air Council. “Pennsylvania needs to act quickly to address both new sources of methane pollution as well as existing natural gas infrastructure.”

The U.S. Environmental Protection Agency on Tuesday released a proposed rule that would reduce the industry’s emissions. This is part of the Obama administration’s plan to cut overall emissions of the potent greenhouse gas by 40-45 percent from 2012 levels by 2025.

The EPA said the standards would reduce methane output by 340,000 to 400,000 short tons in 2025, or the equivalent of 7.7 to 9 million metric tons of carbon dioxide. Oil and gas operators would be required to find and repair leaks, and limit emissions from pumps and certain types of equipment at compressor stations.

Mark Brownstein, vice president of climate and energy at the Environmental Defense Fund, said the EPA’s plan would cover only about 5 percent of emissions from oil and gas facilities nationally. He said leading gas-producing states like Pennsylvania should work for further reductions through state regulations.

Until federal regulations address existing methane sources, the onus will be on states, especially major gas producers like Pennsylvania, to cut the majority of emissions that come from facilities already operating, Brownstein said.

“Pennsylvania as the second-largest gas-producing state has a special responsibility and a special opportunity” to require additional cuts in methane emissions, he said.

Despite their reservations, environmental advocates welcomed the EPA rule as a serious attempt to reduce emissions of a substance that is the main component of natural gas.  Methane has a greenhouse effect in the atmosphere that in the short run is many times more potent than carbon dioxide’s, though methane dissipates more rapidly than CO2.

“The rule overall is a really big deal because it addresses emissions of methane which have not been required to be controlled before,” said Minott of the Clean Air Council, in an interview with StateImpact Pennsylvania. He predicted that the methane cuts, together with reductions in volatile organic compounds which are also required by the rule, will improve human health in areas of Pennsylvania that do not currently meet federal clean-air standards.

According to the EPA, about 4 million Pennsylvanians live in areas that fail to meet federal standards for ozone pollution.

Meanwhile, data from the state’s Department of Environmental Protection show methane emissions from natural gas production facilities dropped 13 percent to 108,000 tons in 2013 from 124,000 tons in 2012, although emissions of other contaminants such as volatile organic compounds increased in response to industry growth.

And 90 percent of the reduction in completion emissions came from one company – Cabot Oil & Gas – without which there would have been a 10 percent increase, Altenberg said.

George Stark, a spokesman for Cabot, said the company cut methane emissions by 85 percent from 2011 to 2014 while increasing production by 250 percent.

Stark said that green completions played an important role in the emissions reduction, and were achieved by building pipelines to transport gas that would otherwise have been flared.

The DEP said Tuesday it is continuing to work to cut methane emissions.

“We are working to develop a robust approach to limiting methane emissions in Pennsylvania,” said DEP Secretary John Quigley, in a statement. “DEP has compiled data on methane emissions and has started research into possible methods of identifying sources of methane emissions from abandoned oil and gas wells, among other sources. We are looking at how other leading states regulate wasteful methane emissions, and will study the EPA’s new regulations carefully.”

Nationally, the emissions cut would cost the industry $320-400 million by 2025, but that would be outweighed by climate and health benefits estimated to be worth $460-$500 million, resulting in a net benefit of $120-$150 million, said Janet McCabe, acting assistant administrator in the EPA’s Office of Air and Radiation, during a conference call with reporters.

The trade group’s president, Marty Durbin, said natural gas producers have cut methane emissions by 38 percent since 2005 as a result of existing regulations and industry innovations, and he predicted that further reductions will follow.

“Natural gas producers will continue reducing methane emissions regardless of this proposal,” Durbin said in a statement. “Not only do we have an incentive to capture methane – it is the product we sell – but our track record of efficiency improvement and innovation are what drives the environmental, economic and energy security benefits of natural gas.”

But a new study, also released on Tuesday, suggests that wastage from some parts of the natural gas industry is far higher than previously estimated by the EPA.

The study, conducted by Colorado State University and published by the journal Environmental Science and Technology, said that gathering facilities – which consolidate gas from many wells and feed it into pipelines and processing plants – emit 100 billion cubic feet of natural gas a year, or about eight times higher than EPA estimates.

The study, based on 114 gathering systems and 16 processing plants across the country, suggests that the facilities may together represent the biggest methane source in the oil and gas supply chain, said Brownstein of the Environmental Defense Fund. The systems have been largely uncounted, and could add 25 percent to the government’s greenhouse gas inventory if included, he said.

The EPA did not confirm or deny the conclusion of the CSU study, saying only that it would review it.