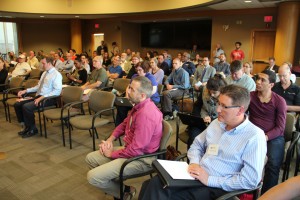 State regulators heard comments on how quickly it should address the EPA’s plan to curb carbon emissions Monday night in Pittsburgh. Around 100 people came to a DEP listening session where more than three dozen speakers discussed the economic benefits of energy efficiency, the health effects of air pollution, and whether cutting carbon will hurt the economy and raise energy costs.

DEP Secretary John Quigley and several DEP staffers attended the session, one of 14 planned for around the state to address the EPA’s Clean Power Plan. The plan sets a target of lowering carbon dioxide emissions from the power sector by 32 percent of 2005 levels by 2030.

The EPA gave each state a target for carbon dioxide reductions–Pennsylvania’s target is about 33 percent of its 2012 levels. Each state can come up with their own plan on how to achieve those goals, and the DEP is beginning to come up with the plan.

Among the decisions the DEP will have to make is whether to choose to join other states in a carbon trading system or whether to police its own carbon emissions.

Quigley said the DEP would be digging into this and other questions about its compliance plan in the months to come. But first the agency wanted to listen.

“We wanted to hear from Pennsylvanians first,” Quigley said.

Quigley said he would be going to all 14 sessions, including two more in Western Pennsylvania Tuesday–one in Johnstown in the morning and one in Waynesburg in the evening.

A recent Penn State report warns Pennsylvania faces hotter, longer summers and more destructive storms and floods if the climate continues to warm unabated. The report found the state could face a 5 degree warming by 2050.

Patricia DeMarco, a retired University of Pittsburgh professor said at the hearing climate change is too big an issue for delay. 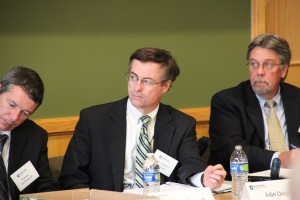 But John Pippy of the Pennsylvania Coal Alliance said the DEP should slow down its process to consider the costs and impacts of clamping down on emissions. “There needs to be a very deliberate process–this energy policy’s too important to get it wrong–not only do you have livelihoods at stake but literally, our economy.”

Pippy said coal — which fueled around 50 percent of U.S. electric power in 2008 and is now around 36 percent of the power mix– will still be needed even though it produces high levels of CO2. He said the EPA’s Clean Power Plan makes it virtually impossible to build new coal-fired power plants that would burn more cleanly and efficiently.

“What we need to get rid of are older, less efficient plants and build newer, cleaner plants that could then subsidize the growth of renewables,” Pippy said.

The costs of complying could bring pain to people in the state, warned Walt Drosjack. Drosjack, an engineer, wore the orange t-shirt of Americans for Prosperity, a low-tax, pro-industry group funded by the conservative billionaires Charles and David Koch.

“The EPA’s plan will hurt the most vulnerable people in Pennsylvania,” Drosjack said. “In a state with an eroding tax base, and young people leaving the state, I’m very concerned with how this plan will impact my children, and my grandchildren…we need more family-sustaining jobs, not less. We need more opportunity, not less.”

But Grant Ervin, sustainability officer for the City of Pittsburgh, disagreed that cutting carbon would slow down the economy.

Ervin said he was recently at a meeting in Pittsburgh of companies involved in this “economy of the future”. The companies made solar-powered water purifying systems, battery storage and energy purchasing software.

“You’re seeing it already — there’s clusters of these companies that are forming in and around Pittsburgh. Pennsylvania has an opportunity to be a market leader” in the clean energy economy, he said.

Despite calls for delay, Quigley said he was in no mood to act slowly. He said DEP will finish a rough draft of its plan by Memorial Day and a final plan by September, 2016.