The Homer City Generating Station, Homer City, Pa. President Obama has announced rules to cut greenhouse gas emissions. Pennsylvania is the third highest state in the nation when it comes to CO2 emissions from energy production.

Now it’s up to each state to come up with a plan to reduce its power plant carbon emissions.  The finalized rules include incentives for solar and wind and give states more time to reach their goals.

The coal industry will be the biggest loser, and has pledged to fight the plan. EPA expects the percentage of electric generation in the US from coal to fall from 36 percent this year to 27 percent by 2030 under the plan. Pennsylvania is the fourth largest producer of coal in the nation, and the only state where anthracite coal is mined.

It’s also the third-highest emitter of energy-related carbon dioxide in the country.

John Pippy, CEO of the Pennsylvania Coal Alliance, said the new rules would place an undue burden on the coal industry, and force closures of power plants and coal mines.“EPA has set the bar so high, it would be virtually impossible to maintain a significant coal-powered generation fleet and still hit the target numbers that the EPA has set,” he said.

Pippy said that instead of mandating carbon cuts, the EPA should instead incentivize newer, more efficient coal plants to be built.“They’re putting a regulation in that is not achievable and is a de facto ban on coal-fired generation,” Pippy said.In his speech at the White House, Obama warned of upcoming battles with the coal industry. He said coal miners have been losing their jobs for decades.”I want to work with Congress to help them not to use them as a political football,” he said. “Partisan press releases won’t help those families.”A coal producer with two mines in western Pennsylvania, Alpha Resources, filed for bankruptcy today. 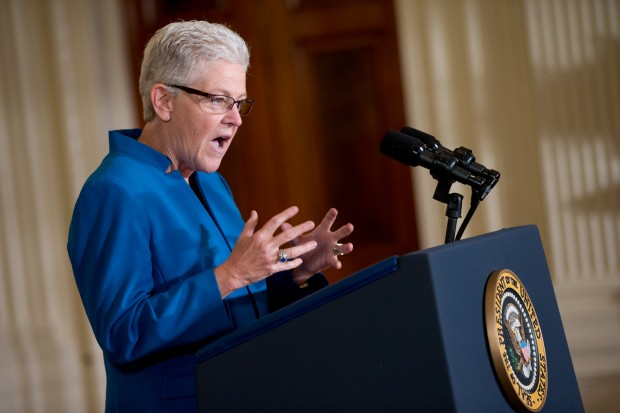 Despite the coal industry’s pledge to remain a strong presence in Pennsylvania, the new rules will likely drive more power plant conversions from coal to natural gas nationwide. Coal still dominates when it comes to electric power generation, but natural gas is gaining ground. This April, natural gas surpassed coal in the nation’s power generation mix for the first time. And the gas industry has quietly welcomed the Clean Power Plan while hoping not to get edged out by renewables like wind and solar.Frank Macchiarola, executive vice president with America’s Natural Gas Alliance, says the Clean Power Plan can bring benefits to the Keystone State.

“The greater utilization of gas for power generation around the country is an absolute win in Pennsylvania,” he said.

Macchiarola says natural gas fields like the Marcellus Shale have helped drive down the cost of natural gas and spurred conversions from coal-powered generation.

“With or without this rule the role of natural gas in electricity generation is on the rise and the reason is [because of] states like Pennsylvania,” he said.He says natural gas has environmental benefits from a carbon perspective, but also, natural gas burning power plants emit fewer air pollutants than coal.”Certainly the role of this rule making is an important one but it shouldn’t overlook the larger market direction, which is greater utilization of natural gas.”

Governor Wolf clearly has a fine line to walk as the influence of the coal industry in Pennsylvania remains strong. Wolf says the state can achieve the targeted reductions without gutting the coal industry.

“Clean coal is a part of our energy portfolio, as is natural gas, solar, wind, and other sources of power, and all of this has to be part of a comprehensive strategy,” said Wolf in a release.

Some fracking opponents may be disappointed by the emphasis on natural gas in Obama’s plan to combat climate change. But PennEnvironment’s David Masur says that’s a function of how the EPA is implementing these new rules. When it comes to regulating carbon emissions, Masur said, the agency won’t look at the entire production cycle. It will only measure carbon emissions at the smoke stack, where natural gas clearly beats coal.

The federal Clean Air Act doesn’t address carbon emissions directly, only air pollutants that have immediate public health impacts like nitrogen oxides or particulate matter. But the agency is banking on previous court rulings which confirmed its ability to regulate carbon emissions.

Not everyone agrees with that interpretation of the law. States like West Virginia are expected to challenge the plan in court.

In the meantime, the Pennsylvania Department of Environmental Protection says it has already started to work on a plan.”Pennsylvania is committed to achieving our target emission reductions, and we will develop the right tools and smart policies to do so,” said DEP Secretary John Quigley.To meet the goals set by the EPA, Pennsylvania would have to lower carbon emissions from the power sector by 23 percent from 2012 levels by 2030.But even without the new rule, the state’s power sector is expected to lower its carbon emissions by 8.5 percent by 2020, according to the EPA’s analysis.