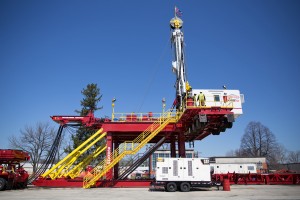 The Schramm T500XD drill rig at a site in Northeastern Pennsylvania.

As Pennsylvania lawmakers continue to wrangle over whether to impose a severance tax on natural gas production, a new study finds that the state derives dramatically less revenue from its gas industry than some other leading oil and gas states that have a severance tax.

The study from the U.S. Energy Information Administration showed Friday that Pennsylvania gathers less than 1 percent of its total tax receipts from an impact fee based in part on the number of wellheads drilled.

That compares with North Dakota which gathers more than half of total tax revenue from its severance tax; Alaska, where the tax accounts for 72 percent of the total, and Wyoming which draws 39 percent of its income from the tax.

Republican lawmakers have refused to accept Gov. Tom Wolf’s plan that the impact fee should be replaced by a severance tax of 5 percent on the value of gas produced, plus 4.7 cents for every thousand cubic feet, which Governor Wolf says will raise about $1 billion for education and environmental protection.

The fight over the severance tax has contributed to a long-running impasse over the fiscal 2016 budget, now nearly two months late. Wolf vetoed a Republican budget that included no severance tax June 30. The two sides have been at loggerheads since then.

Jeff Sheridan, a spokesman for Gov. Wolf, said the EIA report shows that Pennsylvanians are not benefiting from their gas industry to the same extent as the citizens of other leading fossil-fuel producers.

Sheridan called the proposed severance tax “a reasonable proposal in line with our neighbors.” The tax is modeled on West Virginia’s severance tax on gas.

“For years the previous governor let oil and gas companies off the hook. Gov. Wolf wants to make sure the gas companies pay their fair share,” said Sheridan.

Steve Miskin, a spokesman for the House Republican majority, said the state should not rely on revenue from a commodity to fund major spending items like education, because of the fluctuations in commodity prices.

“He’s trying to tie education to the Marcellus, and if you’re tying something of such importance to a commodity, you can’t rely on that revenue,” Miskin said. 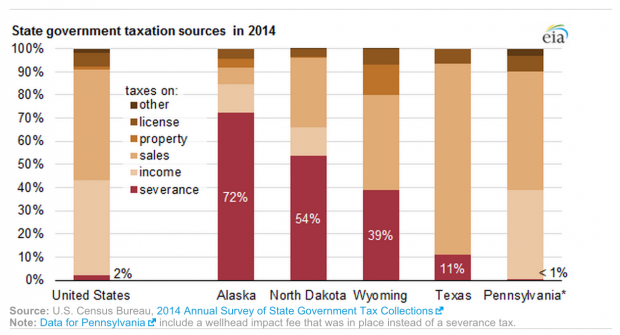 U.S. crude oil prices, at a little over $40 a barrel, are less than half their level of a year ago, while natural gas futures, at about $2.75 per million BTUs, have dropped by more than $1 over the past year.

Miskin rejected Sheridan’s assertion that Pennsylvania citizens have been deprived of the benefits of the huge gas reserves because of the absence of a severance tax.

“Pennsylvania has reaped huge benefits from this resource,” Miskin said, arguing that the I-80 and I-79 corridors where the energy industry has been most active were notably resistant to the recession of 2008-09.

That activity would be at risk if there was a severance tax, Miskin said. “If you keep raising the cost of doing that business here in Pennsylvania, they will choose cheaper locations.”

Asked whether Republican lawmakers would now accept a severance tax in any shape or form, Miskin said: “That’s not anything our leaders are advocating. Right now there’s no need for any new taxes.”

Jennifer Kocher, a spokeswoman for the Senate Republicans, said a 5 percent tax would not generate the predicted $1 billion with gas prices at current levels. One study calculated that at current prices, it would take a 17 percent tax to raise that sum, she said.

Pennsylvania, the second largest gas producing state after Texas, is the only major U.S. gas producer that does not have a severance tax; instead, it has an impact fee based on the number of wellheads drilled and the wholesale price of natural gas. Despite growing production, revenue from the fee has been relatively flat at an average $213 million a year between 2011 and 2014 because prices remained low and better technology yielded more gas per well, the EIA report said.

The Associated Petroleum Industries of Pennsylvania, a trade group, argued that the natural gas industry creates thousands of jobs and contributes billions of dollars to the state economy, and those benefits would be endangered if lawmakers pass a severance tax.

Joseph Leighton, the group’s associate director, said the existing impact fee has distributed some $855 million to communities since 2012, in addition to more than $2 billion in state and local taxes paid by the gas industry.

“State lawmakers should reject the severance tax so that the benefits of Pennsylvania’s energy development continue to flow,” he said.

Even if Pennsylvania legislators finally agree to the severance tax, the state will not be nearly as heavily dependent on that source of revenue as some of the other top gas-producing states, the EIA report said. It calculated that Pennsylvania’s proposed tax, if enacted, would account for only 3 percent of total revenue, slightly above the national average of 2 percent.

In an effort to break the budget impasse, Wolf dropped his original plan that the severance tax would be based on the minimum value of $2.97 per million BTUs – more than 20 cents above Thursday’s closing price on the New York Mercantile Exchange – because he said that would make it a “punitive” tax with the current depressed market prices.

CORRECTION: A previous version of this article stated the legislature has not approved a budget. It did, and Gov. Wolf vetoed it June 30.