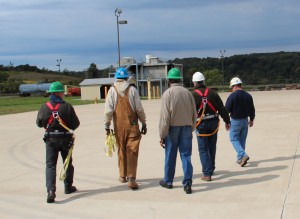 Workers undergoing a training for the natural gas industry at a community college in Fayette County, Pa.

A state agency says the oil and gas industry is failing a requirement to report on hiring of women and minority owned businesses.

The Department of General Services is calling on the legislature to make it harder for the industry to avoid its reporting requirements.

It says 70 percent of businesses it contacted did not return its survey on their use of “Small Diverse Businesses.” Producers are required to fill out the survey under a provision of Act 13, the state’s oil and gas bill, meant to encourage the industry to patronize businesses owned by minorities, women and veterans.

“To see such a low rate of response to the survey is disappointing, considering our commitment to ensure that opportunities are being afforded to small diverse businesses in Pennsylvania,” DGS secretary Curt Topper said in a statement.

It was the third year in a row of dismal reporting from the industry on the survey. As StateImpact Pennsylvania reported, each of the past surveys have showed low response rates: 27 percent in 2013 and 40 percent in 2014.

Small diverse businesses, according to the state, are businesses that are “minority, woman, veteran, and service-disabled-veteran-owned.”

In addition to filling out the survey, Act 13 required drillers to have policies in place prohibiting discrimination based on gender, race, creed or color, and use a special database the state keeps of small diverse businesses as potential contractors and suppliers.

Of the 78 surveys the state sent out, 54 were not returned, according to a report released by the agency. Of the 21 respondents who were still operating in Pennsylvania, only 13 reported using the state’s database of small diverse businesses.

Eight operators said they didn’t hire any small diverse businesses. Several reported they had already chosen their contractors or faced geographical limitations in using these businesses, according to the report.

All told, 79 percent of the state’s producers either didn’t respond or reported using no small diverse businesses.

The Marcellus Shale Coalition hosted a training with the DGS for companies to comply with the requirement last fall. In a statement, a spokeswoman said the industry was “committed to sourcing their supply chain needs and hiring locally when and where possible.”

Rob Boulware, a spokesman for Seneca Resources, said his company complies with its requirements and fills out the survey on an annual basis. “We use a diverse list of large and small suppliers from those communities closest to, and most impacted by our operations,” Boulware said in an email.

Adding sanctions, the agency report states, “would send a firm message to the Marcellus shale producers of the importance of providing opportunities for small diverse businesses to work as subcontractors and suppliers.”

In an email, Kate Eckhart, a spokeswoman for Senate President Pro Tem Joe Scarnati, said “we are willing to look at ways to ensure that companies fully adhere to law.”

“We are disappointed that companies have not complied with this portion of Act 13,” said Eckhart. “Producers should comply with the law as it was written and supply the necessary information.”