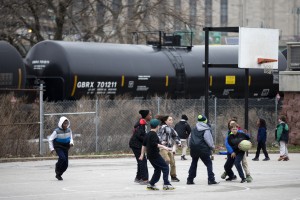 Oil trains like this one in central Philadelphia are the focus of security concerns by officials planning for huge crowds during the visit of Pope Francis to the city in late September.

Yes, it has occurred to city officials that some of the oil trains that rumble through Philadelphia pass right below Eakins Oval and the Benjamin Franklin Parkway, site of two huge events during the papal visit weekend, Mayor Michael Nutter said Thursday.

At a news conference to update the public on the city’s preparations for the influx of a predicted 1.5 million people, Nutter said officials have been working with the railroads on the issue of oil trains.

“We are working with the railroads, we are sensitive to the issue,” Nutter said after being asked whether officials had considered halting the trains during the massive event, when Philadelphia will be attracting global attention.

A festival of families on the Saturday evening of papal weekend in late September will be held on the Parkway, as will the public Mass on Sunday that is expected to attract more than a million people.

Nutter decline to elaborate, and his emergency management director, Samantha Phillips, refused to comment after the news conference.

But both CSX and Norfolk Southern, which haul oil trains of 100 cars or more through densely populated sections of Philadelphia, said they had been working with the authorities to ensure security during the Papal visit.

Rob Doolittle, a spokesman for CSX, whose oil trains run down the east bank of the Schuylkill River and under Eakins Oval, declined to say whether the company will halt its trains during the papal events but confirmed that the company is working with security agencies

“While it wouldn’t be appropriate to discuss any specific security measures for the papal visit to Philadelphia, I can say that CSX is collaborating with public-safety agencies in developing plans to ensure the safety and security of that event,” Doolittle wrote in an email.

David Pidgeon, a spokesman for Norfolk Southern, which hauls oil trains past 30th Street station and through the Drexel and Penn college campuses, said the company is “working closely” with federal, state and local security agencies ahead of the visit, and is “working with our customers on how best to serve their needs.”

Philadelphia Energy Solutions, the South Philadelphia refinery owner that buys the crude oil hauled by both railroads, did not respond to a request for comment.

Local critics of the oil trains fear there could be a catastrophic loss of life if a train derails and explodes near residential buildings even on an ordinary day, as one did in Lac Megantic, Quebec in July 2013, killing 47 people.

That followed new rules issued in May by the U.S. Department of Transportation, with requirements including stronger tank cars.  The feds set a timetable for the retirement of older tank cars that have been involved in a string of derailments and explosions around the country – including two incidents in Philadelphia — in the last two years.

Any decision to halt the oil trains during the papal visit could be viewed as a public-relations blow to the railroads, which have invested more in safety and stepped up their own inspections in recent years in response to the widely publicized accidents and growing public unease.

Tracy Carluccio, deputy director of Delaware Riverkeeper, an environmental group that opposes oil trains, said Mayor Nutter’s comments may reflect a recognition of concern by the public and by Philadelphia City Council, which has called for increased safety measures by the operators of trains passing through the city.

She argued that halting the trains for the weekend would direct national attention to the safety issue.

“It would be a recognition of the hard facts that there have been a tremendous number of accidents,” she said.