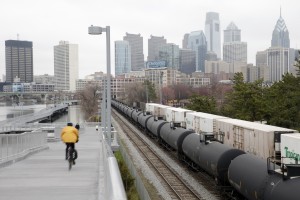 Philadelphia Energy Solutions is seeking to complete a joint venture that would give it a controlling interest in crude-oil loading terminals and storage tanks in North Dakota, the source of the Bakken Shale crude that is processed by the South Philadelphia refinery.

The refiner said in a Securities and Exchange Commission filing on July 27 that it has agreed in principle to enter into a joint venture with BOE Midstream, which owns the rail-loading and oil-storage facilities.

If the transaction is completed, the Philadelphia refiner would own 85 percent of the joint venture while BOE’s parent, Globe Resources Group, would own the rest, the filing said.

BOE’s assets include a crude oil rail-loading terminal with a capacity of 210,000 barrels a day and 882,000 barrels of tank-storage capacity. It also owns another terminal at Killdeer, ND, and a 39-mile pipeline connecting the Killdeer terminal with the loading facility.

“We currently expect that Refining will contract with or otherwise utilize the crude loading terminal in connection with its purchase of crude to be transported to the Philadelphia refining complex,” PES said in the filing.

The company said it expects the joint venture to be completed in the third quarter, subject to the completion of due diligence by both sides. Details were set out in a term sheet between PES and Globe Resources on June 9.

In the filing for an Initial Public Offering of its stock, PES said it has the capacity to process 275,000 barrels a day of domestic crude oil and can receive 300,000 barrels a day of crude-by-rail. It noted that its Philadelphia crude unloading terminal is the largest on the East Coast.

The filing did not specify the company’s proposed investment in the joint venture. PES spokespeople were not available to comment because of the pending IPO.

Afolabi Ogunnaike, senior analyst for refining and the oil market in the Houston office of Wood Mackenzie, an energy research company, said the joint venture would cut costs and shorten the refiner’s supply chain.

Ogunnaike argued that reducing the number of parties in the supply chain will save money and put PES at an advantage over some of its competitors who don’t have an equivalent ownership position.

“It positions them a bit better versus other refiners which have more expensive source of Bakken on the East Coast,” he said.

“It’s very concerning because it shows they are really in this for the long term,” Carluccio said. “They are going to have more of a financial interest in continuing their expansion with that source of oil.”

This story has been updated to include comments from the Wood Mackenzie analyst.