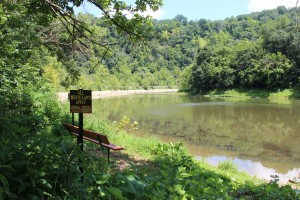 On the banks of Ten Mile Creek, a stream that snakes through Greene County, Ken Dufalla looked out at one of his favorite fishing spots.

“That’s probably one of the best walleye fishing there is in the evening you can find. I’ve caught muskies, walleyes, saugers,” Dufalla said.

Four years ago, Dufalla, who leads a local conservation group, stopped fishing here. That’s because the tests he did as president of his local chapter of the Izaak Walton League showed surprisingly high concentrations of bromides. The stream contains treated acid mine drainage from the nearby abandoned Clyde coal mine. Bromides are not typically found in mine discharges, treated or not. But bromides are typical of fracking waste water. Dufalla sought help from the Department of Environmental Protection. Ten Mile Creek feeds into the Monongahela River, the source of drinking water for hundreds of thousands of people in western Pennsylvania, including parts of Pittsburgh.

Researchers say that bromides, when combined with chlorine at a downstream drinking water facility, can create carcinogens such as trihalomethanes.

It turns out that the bromides were not the only toxin Dufalla had to worry about. When DEP tested the stream water at the mine’s discharge point in April 2014, it found radium-226 and radium-228 at levels 60 times higher than federal drinking water standards allow. Both radium-226 and radium-228 can be found in higher quantities in Marcellus Shale than in other rock formations. And radium can be present in waste water produced during oil and gas production.

Now the state is investigating the possibility that radioactive materials from oil and gas drilling waste may have gotten into the stream.

Last month, the DEP collected water, vegetation, sediment, soil, and fish at 13 sites. The DEP also tested water at the Tri-County Joint Municipal Authority, three miles downstream of the Clyde Mine discharge. The agency is looking for “Marcellus Shale indicators” in the water, as well as acid mine drainage. 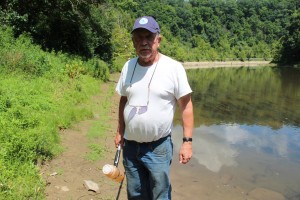 “We were much much lower (than the DEP’s),” Ziemkiewicz told StateImpact. “In fact, most of (the levels) were below the detection limit.”

He says he’ll be watching closely for the DEP’s newest results.

“I would say the April 2014 results were anomalously high,” he said. “If they come up with results that were closer to ours, then I would say the 2014 data were simply wrong.”

DEP Spokesman John Poister said in a statement that the agency needs to conclude its analysis of its samples “before reaching any conclusion or making any comparative statements between any of the sampling events.”

The 2014 test results weren’t made public until last month, after an environmental group requested the results under the state’s Right-to-Know law.

Whether the DEP’s test results were flawed or not, Dufalla suspects malfeasance. He thinks someone dumped fracking waste in the Clyde Mine.

Dufalla points out illegal dumping has occurred in this part of the state before. In 2012, a local business man pleaded guilty to illegally dumping fracking waste, into streams, ponds, and an abandoned mine.

And last year, a local sewer authority announced it was investigating possible dumping of frack water at its treatment plant.

According to the federal Environmental Protection Agency, long term exposure to radium increases risk of lymphoma, bone cancer, and leukemia.

But earlier this year, the DEP released a report stating natural gas drilling waste posed “little or limited” potential for radiation exposure to the public or industry workers. The report did warn that spills of oil and gas fluids could lead to “potential radiological environmental impacts.”

The Marcellus Shale Coalition declined requests for comment. But previously the trade group said its members handle drilling waste in an environmentally responsible manner, and stressed that the industry has increased the recycling of fracking waste.