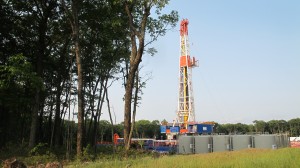 Marcellus producers are continuing to cut back on rigs like this one in Tioga County because of low market prices for gas, the DCNR says.

Shale gas development on Pennsylvania’s public lands slowed again in 2014, the Department of Conservation and Natural Resources said on Thursday, in the latest sign of an industry slowdown in response to low market prices.

The DCNR issued its latest shale gas monitoring update showing that the number of well pads, roads and approvals to drill in state forests all fell last year, adding to a decline that began in 2012 when prices began to fall.

The number of approvals declined to 47 last year from 79 in 2013, and new road construction essentially ceased, adding less than a mile, even lower than the four miles of new roads that were built for gas development in 2013. Since 2007, 1,020 wells have been approved and 608 have been drilled on state land, the DCNR said.

DCNR Secretary Cindy Dunn attributed the pullback in part to a migration of some gas companies to southwest Pennsylvania from northern and central areas, as well as to the sharp decline in market prices.

“There has been less activity recently because we have seen the gas companies direct their activities toward the southwestern part of the state in search of the wet gas,” she told StateImpact during the quarterly meeting of the DCNR’s Natural Gas Advisory Committee. “However, the companies still have leases there and can still develop them.”

The gas price drop – which has most recently seen futures prices decline to $2.89 per million British thermal units, or 87 cents lower than a year ago, according to the Energy Information Administration – has forced producers such as those in the Marcellus Shale to curtail drilling and exploration or cut plans for future development.

Seneca Resources, which drills in several of Pennsylvania’s state forests, has been able to resist cuts in production because of its investment in pipelines that can take its gas to market, but has sharply scaled back its plans to increase output, said Dale Rowekamp, vice president of land and marketing for the Pittsburgh-based firm.

As a result, other companies have pulled back substantially, as shown by declining rig counts and the latest metrics released by DCNR, he said.

Other companies invested more heavily in the Marcellus in anticipation of having a more extensive pipeline network with which to market their gas, and have had to cut spending back in response to that and the current price decline, Rowekamp said.

“Many producers including Seneca have got gas that we could sell today but we’re not selling because prices don’t support it,” he said.

He declined to specify the market price that would allow Seneca to break even, but estimated that it’s about $2 for most local producers.

While gas futures at the Henry Hub in Louisiana are around $2.80, the price in Pennsylvania where producers like Seneca are selling is $1.20, he said. “It’s a substantial reduction in price and it’s at such a low level that it really doesn’t warrant drilling new wells nor potentially even producing [from] existing ones.”

Even though Seneca is not cutting current production, it has sharply scaled back its plans for growth. The company previously planned to be operating two or three times the number of drilling rigs than it plans to today, Rowekamp said.

He predicted that prices will eventually rise in response to an anticipated proliferation of pipelines across Pennsylvania because the abundant gas will finally find markets. But it’s unclear whether the new infrastructure will be extensive enough to match supply with demand.

His comments follow a prediction by Department of Environmental Protection Secretary John Quigley on Wednesday that Pennsylvania will have as many as 30,000 miles of new pipeline in the next 20 years.

“It will certainly help,” he said, referring to the thousands of miles of pipeline that’s expected to be built in coming decades. “The question is how much.”

In comments to the DCNR meeting, Rowekamp predicted that exports of liquefied natural gas will be crucial to the industry’s future because the Marcellus has more than enough capacity to quickly meet any increase in domestic demand.

“The reality is that we’ve got a lot more gas that can be developed more quickly than the market can support,” he told the meeting. “Exports are going to be a large driver.”