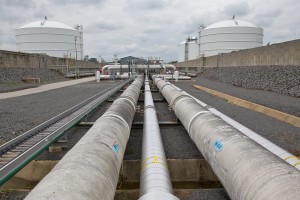 Pennsylvania could get up to 30,000 miles of new natural gas pipelines over the next 20 years, Secretary Quigley says.

Pennsylvania will see as many as 30,000 miles of new pipeline built over the next 20 years to take the huge natural gas resources of the Marcellus and Utica Shales to market, the Department of Environmental Protection Secretary, John Quigley, said on Wednesday.

Quigley’s forecast came after the Pipeline Infrastructure Task Force, a wide-ranging group of gas-industry stakeholders, met for the first time in an effort to establish best practices for what the secretary described as a “massive” infrastructure buildout.

Quigley told StateImpact after the 90-minute meeting in Harrisburg that he expects the industry to add 20-25,000 miles of gathering lines, smaller pipelines that connect gas wells to processing plants or main transmission lines. He said an additional 4,000 to 5,000 miles of interstate pipelines will be built over the next 20 years.

Quigley said Pennsylvania has an opportunity to establish national leadership by bringing together stakeholders including communities, industries and regulators to set standards for pipeline development that will seek to meet demands including economic development, environmental protection, and community self-determination.

“We have an opportunity here to show that this resource can be developed responsibly,” he said in an interview. “There is an immense economic opportunity but given all of the impacts that potentially exist from environmental to community to cultural resources, there are risks involved in that development so if we can demonstrate a thoughtful approach and a set of recommendations and practices that minimizes the impact and maximizes the opportunity, I think that’s national leadership.”

He said the proposed collaborative approach has already been proven in Pennsylvania by a working group that established standards on where to site wind farms, and which has become a national model.

The state could also become a national leader if it can show that it can build a “vast” amount of infrastructure in almost every county while minimizing its negative impacts, he said.

His comments came after the 48-member task force heard a presentation on its mission that aims to deliver a report on pipeline development to Gov. Tom Wolf by February 2016. The panel includes federal, state and local government officials, industry representatives, end-users, state lawmakers, farmers, and emergency preparedness officials. They will be part of a series of working groups consisting of about 100 additional members that will produce recommendations on how the state should regulate the pipeline industry. 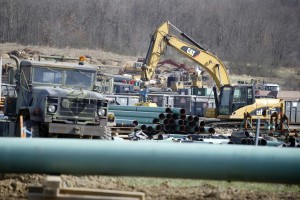 Workers build a gas pipeline in Harmony, Pa. Dennis Martire, from the Laborers International Union, said that the man-hours of union work on large pipeline jobs in Pennsylvania and West Virginia have increased by more than 14 times since 2008.

The panel’s goals include routing pipelines to minimize community and environmental impacts; facilitate “meaningful” public participation, and create a system of “predictable and efficient” permitting. Quigley said the task force is not intended to produce more regulation on the gas industry.

“We are in the midst of a wave of energy development that is unlike any in the state’s history,” Quigley told the meeting.

He acknowledged a “significant degree of public angst” about the safety and siting of pipelines, but expressed hope that community and environmental concerns can be overcome through the collaborative approach embodied by the task force.

The impact of the coming pipeline buildout will be seen in the state’s forests, six percent of which are expected to be damaged or destroyed by gas development, while 80 percent of trout streams are in areas that will be affected by the gas industry, Quigley said.

The predicted pipeline boom could also be a hazard to contractors excavating areas where lines are buried, said Bill Kiger, president of Pennsylvania One Call System, which works to alert contractors to pipelines.

Kiger told StateImpact that not knowing where pipelines are located can cause serious accidents like that in Armstrong County last week when a bulldozer driver hit a gas pipeline, which exploded, giving the driver burns over 70 percent of his body.

“If you call and make a notification thinking that everybody is covered, you expect that to be the case, and not to be in the hospital at the end of the day,” Kiger said.

Although Kiger says the unconventional shale gas drillers support registering rural lines with PA One Call, the conventional drillers have pushed back.

Kevin Moody is general counsel for the Pennsylvania Independent Oil and Gas Association. Moody says the smaller rural gathering lines are not a safety risk.

“The accidents that have caused the most property damage and loss of life have not been on gathering lines,” Moody told StateImpact. “But they have been on regulated utility lines. There’s been no demonstration of safety risk on these gathering lines especially the ones in rural areas, because these are small diameter, low pressure lines. Even if they’re hit, they’re not going to cause damage.”

Moody said conventional operators are often small “mom and pop” operators, who could not afford to participate in PA One Call.

Secretary Quigley urged the pipeline industry to contribute to the process of setting best practices, and said by doing so it could mend fences that have marred its relationship with some communities.

“This will help ensure the industry’s social license to operate,” he said.

The Pennsylvania Energy Infrastructure Alliance, a group promoting private investment on behalf of manufacturing, agriculture and other business groups, said an expanded pipeline network is crucial to reaping the benefits of the Marcellus and Utica shales.

It said the state has only a small portion of the pipelines needed to transport gas to market at a time when demand is on the rise.

“Our state is uniquely positioned for energy growth – if we have the gas pipeline delivery system and other energy infrastructure in place to meet this growing demand,” the group said in a letter to the task force.