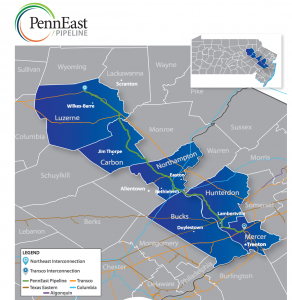 The proposed alternate route of the PennEast pipeline. Click to enlarge the image.

Mercer County is joining the list of landowners trying to block PennEast Pipeline LLC from surveying property — part of a county park — in order to build a highly contentious natural gas pipeline.

The county, which has opposed the project since last year, told PennEast yesterday that the company would no longer have access to the park in Titusville for the purpose of surveying the property to facilitate the project. The county cited soil borings on Baldpate Mountain, which it has deemed as potentially environmentally harmful.

The notification follows an announcement by the state Department of Environmental Protection earlier this month, advising the company not to apply for permits needed for the project, since private landowners refused to give it access to survey their properties.

Thirty-two miles of the $1 billion proposed pipeline would run through four communities in Hunterdon County, before ending in Hopewell in Mercer County. The rest of the 110-mile pipeline crosses land in Pennsylvania.

In New Jersey, much of the proposed route — about 3,000 acres, critics say — would run through preserved open space, farmland, and wetlands, as well as cross numerous waterways.

Unless the project receives federal approval, the county will no longer permit any soil borings to be done on Baldpate Mountain, the highest point in Mercer County offering spectacular views of the Delaware River.

Mercer County is prepared to fight to protect both its interests and the open space it has purchased, according to County Executive Brian Hughes. The property, about 1,000 acres, used to be owned by Trap Rock Industries, which had planned to expand a nearby quarry on Route 39. The county acquired the land in 1998, using Green Acres funds and its own money.

PennEast said it was disappointed by Mercer County’s decision to rescind and terminate survey permission. The company will continue in its efforts to work with all directly involved landowners, as well as agencies, to define the best route, according to Patricia Kornick, a spokeswoman for PennEast. 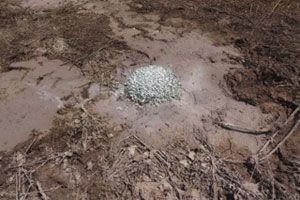 Potential environmental damage at sites, such as this one on Baldpate Mountain, led Mercer County to suspend PennEast's surveying privileges.

Surveys are an important part of the project, though they are not the only way that PennEast obtains information needed to determine the best pipeline route, Kornick said. They are complemented by the comprehensive geological, environmental, and engineering studies currently being conducted by the company, she said.

The county’s action won praise from opponents of the project.

“Without surveys, PennEast will be unable to retrieve the information to move the project forward,’’ said Jeff Tittel, director of the New Jersey Sierra Club. “By sticking together, not letting them on your property, and not supporting an alternate route, that’s how we can stop this pipeline.’’

Michele Byers, executive director of the New Jersey Conservation Foundation, also lauded the county executive’s decision. “(He) knows how crucial it is to protect our preserved lands, which our community worked so hard to save,’’ she said.

The PennEast undertaking is one of at least a dozen pipeline projects in New Jersey, all of which would deliver cheap natural gas from the Marcellus Shale formation in Pennsylvania to consumers and businesses in the state. Some critics question whether the gas will actually end up in LNG (liquid natural gas) facilities to be exported overseas.

Another contentious pipeline project may move forward a bit today. The New Jersey Board of Public Utilities is scheduled to vote again on an amended proposal to build a 22-mile pipeline by South Jersey Gas through parts of the Pinelands.