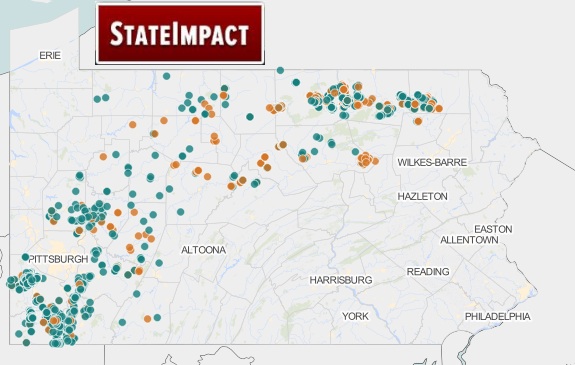 Who’s drilling where?
It’s the basic question everyone wants to know about Pennsylvania’s Marcellus Shale boom, and it’s something StateImpact’s new interactive app will help answer.
More than 1,600 shale gas wells are plotted in the app, which reflects the state’s most-updated data for 2011. Click on a well, and you’ll learn who owns it, how much gas it’s producing, and whether Department of Environmental Protection inspectors have cited it for violations. Problem-free wells are green on the map. If inspectors have cited a site for violations, it’s plotted as a orange dot — and the citation details are listed on the page. Every single well has its own own page, so you can link to them or share them via Twitter and Facebook. If you think there’s more we need to know about the drilling site, there’s a space for you to share comments, stories or pictures.
The app helps answer broader questions, too. Trying to figure out who the biggest players are, or what areas are drilling hot spots? You can navigate to wells by county, municipality or operator to learn that information.
Our app is based on data from DEP’s website. The department updates production information twice a year, and refreshes violation reports about once a month. The next production update is scheduled for early next month. We’ll refresh the app as soon as the new data is public.
Some context on the app’s information: the production data covers DEP’s last reporting period, so the total you’ll see for each well is the amount of gas produced between January and June 2011. The app only tracks producing wells, so the thousands of additional wells DEP has issued permits for, but aren’t yet producing, do not appear on the site. Finally, a reminder that 1,608 wells doesn’t mean there are 1,608 large drilling rigs dotting Pennsylvania. Energy companies drill multiple wells on each site.
So click on the app, and after you do, let us know what you think by sending us an email. Also, be sure to check back throughout the week, as we publish reports based on the information in the app.