A tour group rides on a cart through a geological repository, U.S. Department of Energy's Waste Isolation Pilot Plant, storing transuranic radioactive waste in the desert between Hobbs and Carlsbad on Tuesday, Aug. 17, 2021.

Where should we put our country’s nuclear waste? StateImpact Oklahoma goes underground to find out

Past numerous airlocks, through dimly lit shafts and around piles of shimmering salt crystals, the WIPP permanently houses transuranic waste from around the country. Transuranic waste includes contaminated objects like clothing, tools and equipment from other nuclear facilities.

WIPP is the country’s only deep geological repository for nuclear waste of any kind — the U.S. doesn’t have a permanent repository for high level waste like spent nuclear fuel . But its other claim to fame is it’s also a case study in “consent-based siting,” which is the practice of getting community buy-in for nuclear storage sites.

The facility employs over a thousand people, making it the second-biggest employer in Carlsbad. And while it’s often held up as a prime example of community engagement — especially with its ability to garner federal infrastructure grants and a commitment to giving the state $600 million over 30 years — it still took 28 years of lawsuits and negotiations before the site was operational. 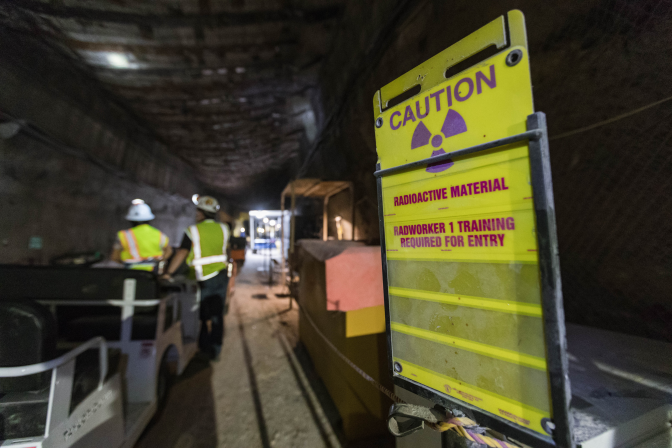 A sign warning of radioactive material is pictured in a geological repository, U.S. Department of Energy’s Waste Isolation Pilot Plant, storing transuranic radioactive waste in the desert between Hobbs and Carlsbad on Tuesday, Aug. 17, 2021.

Adrian Hedden, an energy and environment reporter at the Carlsbad Current-Argus, has been covering the WIPP since 2016. He said while activists from communities like Albuquerque and Santa Fe often travel down to southeastern New Mexico to oppose the facility, Carlsbad residents tend to be supportive.

“From what I can tell, local government officials, city officials, county officials are pretty much supportive of what WIPP has done here safely since 1999,” Hedden said. “[WIPP supporters’] argument is that it’s safe… it creates jobs, it’s an economic benefit for the community, and also, that it’s fulfilling [the community’s] patriotic duty to deal with nuclear waste.”

Data from surveys conducted from 1990-2001 and presented by Sandia National Laboratories indicate that proximity to the WIPP facility, as well as proximity to WIPP transportation routes, increases the level of community acceptance.

Now, a $3 million research project led by the University of Oklahoma’s Institute for Public Policy Research is aiming to develop a new framework for consent-based interim siting of spent nuclear fuel. As the nation’s nuclear waste storage crisis becomes increasingly more imminent, researchers hope they can craft policy that will incentivize communities to volunteer themselves as interim storage sites. For example, a hosting community could receive a new hospital or school, new energy infrastructure or a national state-of-the-art lab that provides high-paying jobs.

Kuhika Gupta, associate director at OU’s Institute for Public Policy Research and lead investigator on the project, said the research hopes to address the imminent problem of spent nuclear fuel storage. About 2,000 metric tons of spent fuel are generated every year, and Gupta said because of the lack of a permanent waste facility, most of that waste is stored on-site at operating or decommissioned nuclear power plants.

“So the core issue of what this proposal and project is getting at is helping solve a policy problem that has been stagnant in the U.S. now for decades — which is finding a solution for safely storing and eventually disposing of spent nuclear fuel,” Gupta said. “But essentially, it’s a very temporary solution.”

Gupta said the federal government has long approached nuclear siting as something public policy researchers call “decide, announce, defend.” It decides where the facility will go, it announces the decision, and then it defends that decision against opposition. She said instead, the government should focus its conversations on what communities stand to gain from housing these sites and putting the power of decision back in the hands of the communities, even if it means ultimately rejecting the facility.

“If these communities don’t want future facilities or future associations with nuclear, [the DOE needs] to respect that,” Gupta said.

‘The U.S. is stuck in a mess of its own making’

In 1987, Congress amended the Nuclear Waste Policy Act to designate Yucca Mountain in Nevada as the country’s first deep geological repository to permanently house spent nuclear fuel and other high-level radioactive waste. But decades of opposition over environmental, safety and religious concerns have kept the site from becoming operational.

Cindy Vestergaard, senior fellow and director with the Stimson Center’s Nuclear Safeguards and Blockchain in Practice Programs, said the responsibility of dealing with nuclear waste lies with the federal government, but with no permanent solution, the DOE is “just moving the problem.”

“The U.S. is stuck in a mess of its own making,” Vestergaard said.

Vestergaard said what separates the U.S. from other countries in terms of nuclear storage is which entity is ultimately responsible for it. Whereas nuclear energy falls under the purview of the federal government in the U.S., Vestergaard said shifting that responsibility to industry makes the process more efficient.

“That’s one of the biggest challenges right there, because it’s very difficult to do consent-based siting,” Vestergaard said. “Oddly enough, from the government side, particularly when it’s coming from an organization like the Department of Energy in the United States that doesn’t have a lot of trust in terms of public trust. And that’s because of a long history on that side.”

While the U.S. isn’t alone in its storage crisis, other countries are much closer to finding permanent storage solutions for high-level nuclear waste. Finland, Sweden, France and Switzerland are working toward constructing high-level waste deep geological repositories, with Finland’s expected to open around 2025.

Sam Brinton, the newly appointed deputy assistant secretary for Spent Fuel and Waste Disposition in the Office of Nuclear Energy at the DOE, acknowledged interim siting is a stop-gap measure. But they said studying the process of consent-based siting with interim facilities will be able to inform consent-based siting of an eventual permanent facility.

But given the lack of movement on siting a permanent high-level waste disposal facility in the U.S., critics are concerned that even though the interim sites are only supposed to be operational for 50-100 years, there won’t be anywhere for the spent fuel to go after that time is up.

“You could argue that the government will be responsible and therefore will make sure that there will be a [permanent storage] repository,” Brinton said. “Can you do that with 100% certainty? No… I think there’s no one who could ever promise something entirely. But these [interim storage sites] are not going to be de facto repositories, because as we are successful in siting a storage facility, we will be gaining confidence that we are also able to then site a repository.”

Erica Bickford, acting director of the Office of Integrated Waste Management for Spent Fuel and Waste Disposition at the DOE, said even though obtaining community volunteers to house nuclear waste seems like it could be difficult, she’s optimistic. She said communities have already reached out expressing interest in the project.

“I think there is generally a lot of skepticism that there will be, in fact, communities wanting to volunteer to host these sites,” Bickford said. “So that gives us a little bit of confidence that if we do this right, when the time comes, we will have hopefully many communities willing to at least engage in the process and consider becoming host communities both for interim storage and then eventually disposal facilities as well.”

Community buy-in amid a complicated backdrop of nuclear history

In 1970, the Sequoyah Fuels Corporation began operations as a uranium conversion facility in Vian. The plant shut down in 1993 after two plant accidents killed one worker and left dozens of others injured, as well as years of environmental and nuclear safety violations.

Cherokee Nation Tribal Councilman E.O. Smith worked at the plant in his 20s. He said the company gave the community an economic boost by providing good wages and job benefits like medical coverage. Smith said the decision to close the facility cost many residents their livelihoods.

“I just wish they hadn’t have shut it down,” Smith said. “I wish they would’ve gotten stricter on their policies. I hated to see them shut it down because it hurt the economy around here so bad, and everybody lost their jobs.” 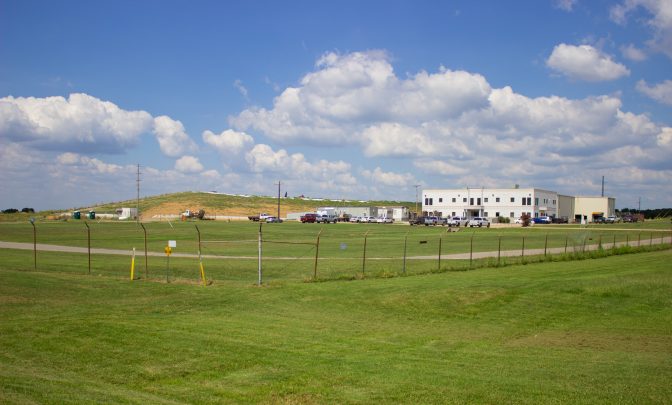 The Sequoyah Fuels Corporation is located in Vian, Oklahoma. The plant has been nonoperational since 1993.

Throughout the life of the plant, it contaminated soil and groundwater around the site with uranium, thorium and metals. It wasn’t until 2018 that the Cherokee Nation was able to finish removing the most hazardous nuclear waste from the site.

Smith said he doesn’t see Vian volunteering to be one of the host communities for the DOE’s interim siting project.

“I don’t. I really don’t,” Smith said. “I don’t think [the opposition to volunteer Vian for siting] would ever get wild and crazy, but I just don’t think it could be put to a vote… I don’t think it’d go through.”

In towns like Vian, nuclear siting may be a tough sell. Sam Brinton said it’s important to remember the decades of harm that’s been done to communities in the past in the name of nuclear energy.

“It is critical to recognize that historically, consent-based siting has not been used,” Brinton said. “And this has led to some truly difficult situations when it comes to the communities that nuclear has been engaged with. (…) We should allow a community to participate based on the risks and benefits that they are willing to [take]. (…) We do not want to be creating a situation where communities will not be able to receive the benefits because we have predetermined that they are at a greater risk.”

Safety technology and standards for nuclear storage have advanced dramatically over the last few decades. But according to Aditi Verma, assistant professor in the Department of Nuclear Engineering and Radiological Sciences at the University of Michigan, who is also working on the OU-led research project, that doesn’t mean safety concerns in communities should be dismissed.

“The goal of this is not just one-way dialogue to just convince people that it’s safe, but also how we think about safety, and then bring in the community perspective about what would safety mean to them, and find a way to design that facility that speaks to the community discussions as well,” Verma said.

“In a big challenge to these technical experts, the drawing board doesn’t start from making a facility now safe and cost effective,” Kuhika Gupta said. “The drawing board starts from, ‘here’s what the community says, and right now, what are the attributes that fit into what these communities are bringing up?’”

In its third and final year, the team plans to hold a co-design workshop in which community members and technical experts would come together to design a facility.

Brinton said the project underscores the federal government’s overdue obligation to safely and securely manage nuclear waste in a way that not only avoids community harm, but provides community benefits. And while they’re hopeful about potential outcomes, they acknowledge it could be a long road ahead.

“This is not a perfect science. It is an art and a science,” Brinton said. “It is negotiation, it’s psychological, and it is emotional. There’s a lot to this process that makes it complex. But I feel confident that we will be able to prevail because it’s the right thing to do. And by doing the right thing, you will, in the end, be successful.”