A juvenile Mississippi kite at WildCare Oklahoma in Noble.

This summer’s scorching temperatures haven’t just had an impact on Oklahoma’s human residents, but its wildlife residents too. At WildCare Oklahoma, a wildlife rehab facility in Noble, the heat is causing an influx of juvenile Mississippi kites.

Mississippi kites are raptors that nest in the southern U.S. before flying to South America for the winter — but when it gets too hot, baby kites jump their high-canopy nests to escape the heat.

Oklahoma has faced record temperatures this summer, and as residents brace for another round of hot summer days with highs near 100 degrees, more kites continue to show up in droves at the rehab facility.

Director Inger Giuffrida said the best thing to do when a baby kite is found is to call WildCare.

“Because Mississippi kite nests are at the very tops of trees, two things happen: one, they fall a pretty good ways,” Giuffrida said. “And then secondly, it can be very difficult to get them back up in the nest.”

Giuffrida recommends the following steps to take if a juvenile raptor is found: 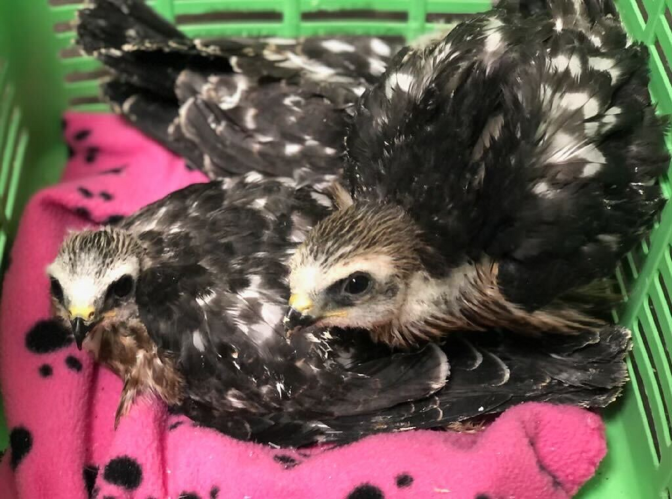 Juvenile Mississippi kites develop darker colors on their plumage as they age.

Giuffrida said even though the height of the nests can make renesting difficult, there are workarounds. Makeshift nests can be built on lower branches, and parent raptors will often continue to care for their young in the new nest. But reuniting kites with their families isn’t possible in every case, and those juveniles stay at the center to be raised up with the other kites.

Other extreme weather events have impacted the Mississippi kites in recent years. Giuffrida said last February’s severe winter storm delayed the arrival of spring insects, and without those insects, the kites lost a primary source of food. Ultimately, that meant many parent kites delayed having babies until it was too late.

“We saw babies coming in even in the beginning of September, which was very tragic because they don’t have enough time to grow and fledge and be ready to fly back to South America,” Giuffrida said. “And so many of those Mississippi kites were just lost last year because of the extreme weather we had.”

The kites require round-the-clock care, with feedings every two hours during the day. Giuffrida said the center is in need of more volunteers to fill the kites’ feeding schedule. Information on volunteering can be found here.

Giuffrida said the facility has admitted 109 Mississippi kites so far this year, with 52 of those being nestlings or almost-fledglings. And there could be more on the way — she said in 2020, 60% of their kites came in after Aug. 2. That year, WildCare admitted 242 kites.

Going forward, as the effects of climate change continue to manifest severe weather events, Giuffrida said delicate ecosystems and the wildlife populations that inhabit them could face irreparable damage.

“It’s just the interconnectivity of the climate. It does have direct and immediate impacts on things like insect populations. And people are like, ‘Well, who cares, they’re just bugs?’” Giuffrida said. “Well, bugs pollinate our food and provide a primary food source for thousands of different animal species. And so it does have a direct impact on us. And maybe we didn’t feel it last year, but too many years of [extreme weather], and we definitely will.”