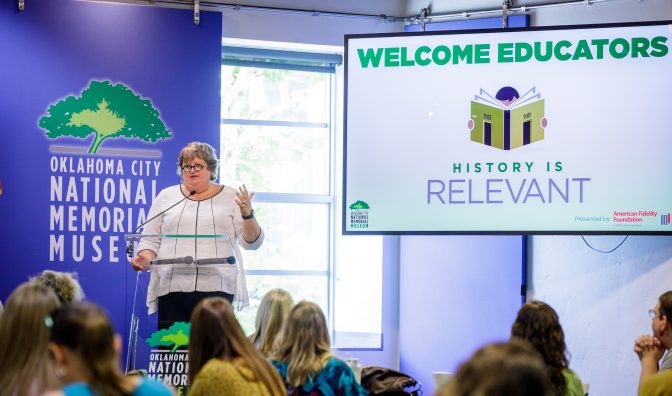 In a conference room at the Oklahoma City Bombing Memorial & Museum, teachers spent a hot July morning talking about how to lead important, difficult conversations in their classrooms.

Stacy Jackson is a teacher at Cheyenne Middle School in Edmond. She’s led field trips at the site of the Oklahoma City bombing for years. She said it’s important to remind students of the tragedy that took 168 lives.

“They can handle a lot more than we often think they can handle,” Jackson said. “I think teachers are pros at this. We know what age they are and what is age appropriate for them. And so we don’t tell them more than they need to know, but we tell them enough.”

In the last few years, tough conversations in classrooms across Oklahoma have come under attack. In 2021, Oklahoma lawmakers passed House Bill 1775, a so-called ban of Critical Race Theory.

That law has been heavily criticized. The ACLU is currently suing the state, saying it limits free speech for educators and students.

The law is aimed at limiting classroom conversations that make students feel “uncomfortable,” because of their race or sex. But still, teachers are finding ways to have uneasy conversations. Jackson said it’s just too important not to do it.

“I think that it’s a great way to practice empathy, listening, understanding someone else’s point of view and learning how to disagree without throwing a tantrum,” Jackson said.

That’s the exact takeaway Lynne Porter wants teachers to have from this and many other events. Porter is the museum’s Director of Educational Experience.

She said she wants students and educators to have a better understanding of the history here.

“Kids today were not born in 1995 and some teachers weren’t even,” she said. “But it’s important to give them the knowledge and the resources available, because we know teachers are busy. They have so many different things they have to teach.”

It goes beyond just learning about the tick tock facts around the bombing. Porter said she hopes tough conversations here can lead to better conversations more broadly.

“I think it just comes down to just trying to find what our commonalities are and then what we can do to help make the world a better place,” she said. “And if there are problems, how can we share our perspectives in a civil manner?”

The new perspectives are helpful for Epic Charter Schools teacher Mendy Esquivel.  She had never been to the Memorial, despite spending most of her life in Oklahoma. So she had simply been looking forward to visiting.

“I also wanted to learn more about it so that I could, you know, include some of my students this following school year and to try to maybe do a field trip down here and talk about the importance,” she said.

Esquivel said it’s important not to whitewash what’s happened in the past and have open and honest conversations to inform the future.

“We can’t learn from history if we don’t remember,” she said. “And I think that we have a tendency to want to make things not as bad as they were sometimes, because that does create an uncomfortable conversation.”

But discomfort isn’t necessarily a bad thing. It implies that people are experiencing something new and learning, she said. And when legislation like Oklahoma’s so-called CRT ban is passed or book bans at libraries are discussed, it makes teachers’ jobs harder.

Teachers are already dealing with low pay, large class sizes and new waves of criticism at school board meetings. And all that has fed into a shortage of teachers.

“It’s frustrating as an educator when someone who’s at the Capitol says, hey, you can’t talk about this when it’s important to have those conversations,” she said.