Santa Fe South was the first district to implement a mask mandate in Oklahoma this fall. Here’s how it’s going

Superintendent: 'The very first day back where we had made the choice, 100% of our kids walked in the door with a mask on or willing to put one on with no argument.' 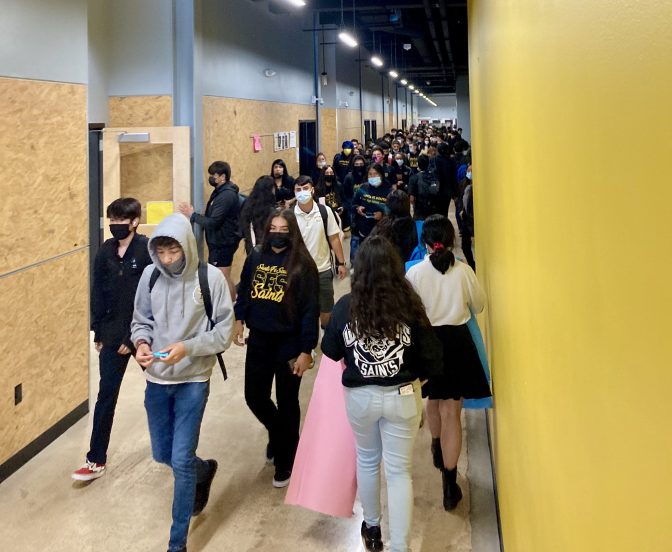 Passing period at Santa Fe South High School. Practically all students mask here, but for those who don’t do it properly Dean of Students Jace Kirk says, all he has to do is point at his own mask to get them to wear it correctly.

It’s passing period at Santa Fe South High School in Oklahoma City. Every student’s face is covered with a mask.

A StateImpact database shows a growing number of schools around Oklahoma are starting to mandate masks in their hallways, with opt out provisions. At least two dozen traditional public school districts, eight charters and 25 private schools have instituted mask mandates.

But it’s a complicated decision to make.

Senate Bill 658 – a law that seemed low on consequences at the time – was signed by Gov. Kevin Stitt in the spring as COVID-19 case counts fell. It went into effect July 1.

The law does a lot of things, but the most controversial piece is that it bans mask mandates unless a governor-declared state of emergency is in effect. Stitt has refused to declare one in the latest surge.

And schools have had to get creative to ensure more masking – a difficult task in a state where vaccine rates are lagging. The law has ended up being a pain for schools, Santa Fe South superintendent Chris Brewster said.

“I don’t believe that in my heart of hearts, this law was ill intended, but I do think it was ill conceived,” Brewster said. “And now that there’s been some time to be thoughtful in its implementation to really allow local control, to exercise local control, I think it’s finding its way to where it needs to be in our state.” 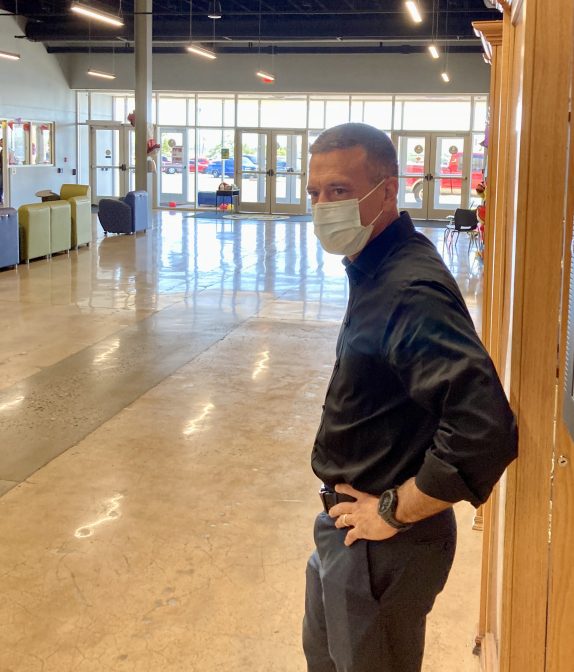 Chris Brewster, Superintendent of Santa Fe South Charter Schools. Brewster was the first superintendent this fall to mandate masks in his district’s schools, despite a state law banning mask mandates without a governor-declared state of emergency.

The first school to mandate masks

On the first day of school, masks were optional in the southside charter district. Santa Fe South’s leaders estimated a third of students wore them, and by the second day that number decreased even further.

Garcia said he didn’t mask up.

“Like, I would only wear it when I would have to but other than that I didn’t,” Garcia said. “But I feel better wearing it now, honestly.”

He acknowledged he wears it now because of the mandate. A mandate that made a splash when Brewster announced it in early August.

At that time, schools believed that they were hamstrung by the law. But in Texas, where schools were similarly limited by an executive order from that state’s governor, some districts were starting to institute mask mandates anyway.

So, on Aug. 11, Brewster made the decision to mandate masks.

“I think there are rare times that we have to consider civil disobedience and perhaps this is one of those times,” he told StateImpact at the time.

The following day, he sent a letter to parents and students saying that they could opt out by filling out a form. But very few students have done so. Only 114 students out of 3,691 have opted out. That’sabout 3%. And Brewster said, some of those who’ve opted out wear a mask, too.

“The very first day back where we had made the choice, 100% of our kids walked in the door with a mask on or willing to put one on with no argument,” Brewster said.

When StateImpact visited Santa Fe South High School, every student observed passing through the halls between classes had a mask at least partially covering their face.

“I appreciate that school districts like Santa Fe Charter Schools and Oklahoma City Public Schools are respecting parents’ rights to decide what is best for the health of their children and opt out of mask requirements if they choose,” he said in a statement. 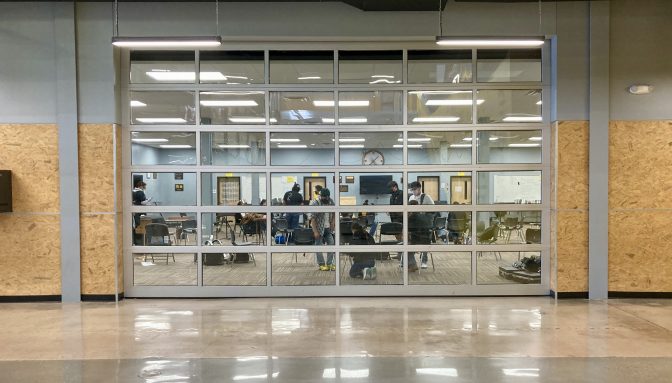 Students mill about in the band room at Santa Fe South High School.

The effects of a mask mandate

At Santa Fe South, masks are certainly a common sight.

Dean of Students Jace Kirk said students with masks below their nose or even on their chin isn’t rare. But it’s fixable.

“All it takes is me just pointing to my mask and they just pull it right up with… no complaints,” Kirk said. “Just need a reminder sometimes.”

In fact, most of the complaining he’s gotten about masking has come from keyboard commenters outside the high school.

“I haven’t heard from a single parent that said I don’t want this, like, this is dumb,” Kirk said. “Not one. I mean, quite the opposite. ‘Thank you so much for doing what you can do to keep our kids in school.’”

And it’s had a positive effect on the school. Ever since the mandate with opt out provisions went into effect, quarantines have dropped.

And Santa Fe South is hardly alone in seeing success.

“The norm was not to wear it because it wasn’t a requirement,” Stefanick said. “By making it a requirement that students can opt out of, you’re flipping the normalcy.”

“I really thought it might be higher,” Edmond superintendent Angela Grunewald said in an interview. “But, you know, people do realize that the masks make a difference and they’re willing to wear them.”

A vocal minority in Edmond has come out against masking in schools, despite CDC guidelines suggesting universal masking in classrooms this fall.

And the proof is in the results, Grunewald said. Since implementing the mask mandate with opt out provisions, despite the number of opt outs, quarantines have dropped. 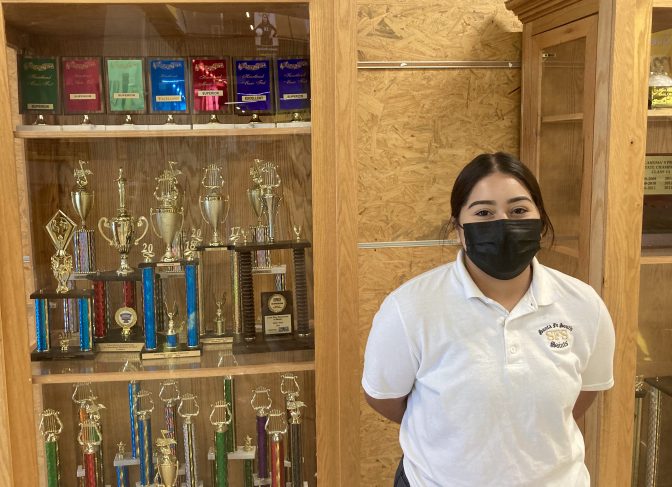 Santa Fe South senior Allison Bonilla stands in front of a trophy case at her high school. Bonilla said she was vaccinated against COVID-19, but before a masking requirement went into effect she was one of the few students who actually wore a mask to school at SFS.

The fate of masking requirements

Oklahoma Attorney General John O’Connor is actively trying to end the injunction many schools are citing as they implement mask mandates.

An expedited hearing before Oklahoma’s Supreme Court should come soon in relation to the injunction that is allowing school districts to implement mask mandates. And Oklahoma’s State Department of Education has said it won’t enforce Senate Bill 658 for the foreseeable future as it works its way through the courts.

At the same time, the Biden administration is investigating Oklahoma’s law banning mask mandates as a potential civil rights violation.

The federal government is concerned Oklahoma’s masking ban could be discriminatory toward students with disabilities.

In a four page letter to Oklahoma officials, federal investigators put the state on notice. They said the state’s ban on mask mandates is making school exceedingly dangerous. And that move could prevent students with disabilities from safely attending school in person.

Four other states – Iowa, South Carolina, Tennessee and Utah – are under similar investigations.

“It’s simply unacceptable that state leaders are putting politics over the health and education of the students they took an oath to serve,” U.S. Secretary of Education Miguel Cardona said in a written statement. “The Department will fight to protect every student’s right to access in-person learning safely and the rights of local educators to put in place policies that allow all students to return to the classroom full-time in-person safely this fall.”

But in actual Oklahoma classrooms, all that outside noise doesn’t really matter. At Santa Fe South, masks are going to be the norm because they help the school achieve its goal of keeping kids participating in in-person learning.

“We don’t want a repeat of sending everyone home and trying to do school virtually,” Kirk said. “We know our kids do better when they’re here and we are able to take better care of them when we’re here in person.”