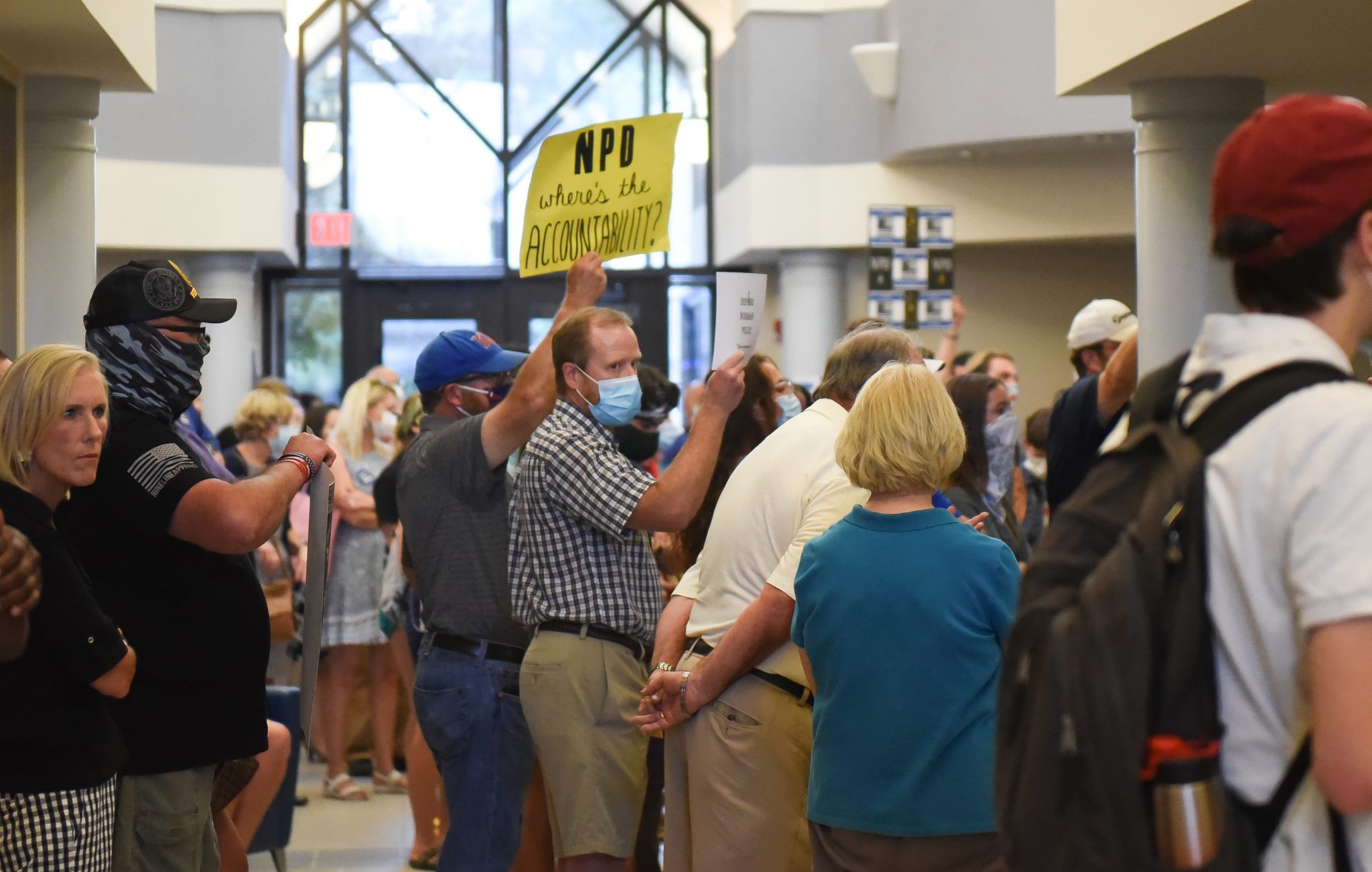 When Norman City Council Member Kate Bierman looked out at the dozens of residents who came to hear the council’s vote on police funding, she felt it was time to address questions about racial equity and the role of police.

“We can have the same level of service for Norman residents in a safer and better trained way if we look at the types of calls that are coming into the police department and ask if all of those calls really need armed law enforcement officers responding to them,” Bierman said.

Bierman isn’t criticizing police. She’s saying something many officers agree with: they are increasingly asked to respond to calls they originally weren’t meant to handle.

The council member and many activists believe it could be safer and more productive for highly trained, unarmed city employees to respond to people struggling with addiction, homelessness and mental illness who aren’t an active threat.

They’re inspired by an alternative policing program in Eugene, Oregon.

“Grandma hasn’t answered the door in three days. (It) doesn’t necessarily require an armed law enforcement presence to go knock on the door and make sure that Grandma is OK,” Bierman said.

That’s why she voted along with a majority of the council to remove more than $865,000 from a proposed increase to the police department’s budget. Some of the money will pay for a team of auditors who will be asked to review police overtime pay, but most of it will pay for a new alternative policing program that the city is currently trying to develop.

Repurposing funds to support community welfare is a central goal of the national “defund police” movement – which gained popularity after George Floyd died in the custody of Minneapolis police. But, Norman is the only one of Oklahoma’s three largest cities where leaders were swayed to redirect funding.

The move has highlighted deep political and social divisions in the community. Some voters saw the decision as an attack on police and filed petitions to recall the mayor and four city council members.

After the vote, a local police union filed a lawsuit against the city.

Activists and politicians say they’re being targeted on a more personal level. Sarah is an activist with the Norman Citizens for Racial Justice.

“There is a very clear pattern of targeted harassment that’s being directed both at elected officials and at activists,” she said.

StateImpact agreed to only identify Sarah by her first name. She says her group and city council members have received violent threats since the vote.

A former city council member the activist group worked closely with has said she believes her duplex neighbor was raped because two Norman police officers shared her address and other personal information online. 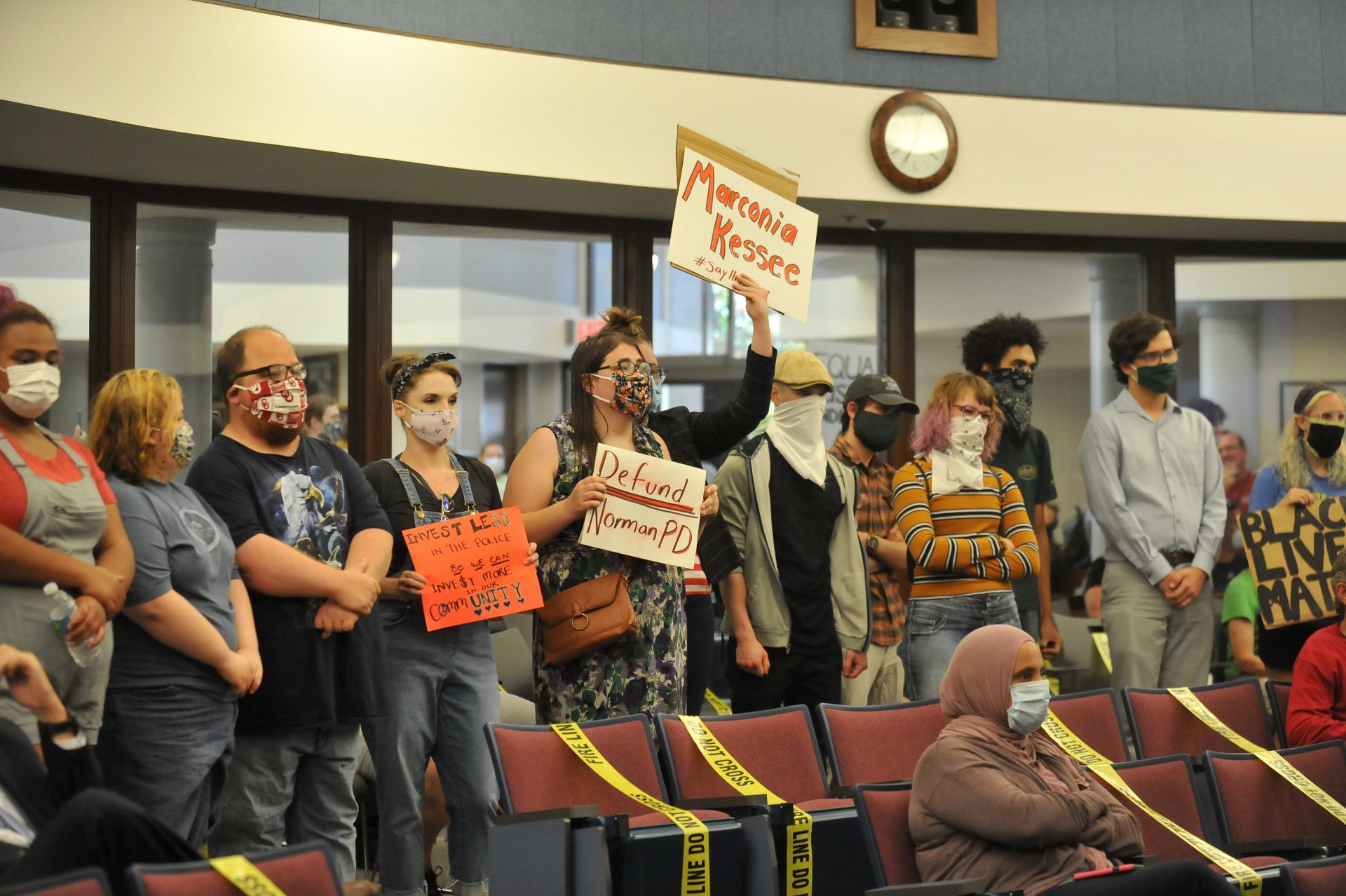 Protesters interrupt the Norman City Council chambers, Tuesday, June 9, 2020, in the hopes of hearing the discussion on defunding the Norman Police.

Her group also wants police held accountable for the 2018 arrest and death of a black man named Marconia Kessee.

Kessee went to a local Norman hospital complaining about a headache. The hospital examined and discharged him and then security called police when he wouldn’t leave.

At first, police intended to take Kessee to the Salvation Army, but when he had trouble walking and speaking, police officers assumed he was “putting on a show” to get back into the hospital.

They eventually dragged him across the parking lot, arrested him and took him to the Cleveland County jail. Around two hours later, Kessee died of a drug overdose.

Norman Citizens for Racial Justice say his arrest and death were avoidable tragedies that might not have happened if unarmed public servants had responded that night.

“Show me the proof”

Sgt. Robert Wasoski disagrees. “Show me the proof that there’s racism in the police department.”

Wasoski is the president of the Fraternal Order of Police Lodge 122 in Norman.

2015 survey data from the U.S. Department of Education does suggest there were disproportionately higher numbers of minority students referred to police in Norman. The data was collected before the city placed police officers inside schools.

He doesn’t like the city council’s decision to take money away from the police budget but he does agree with the council’s interest in having someone else handle some emergency calls.

“There are certainly types of calls that we respond to on a daily basis that don’t need an enforcement action … we would gladly hand over that type of responsibility,” he said.

Wasoski hopes whoever takes over is well trained. He warns that it can be difficult to separate calls that wouldn’t require police.

The police department announced it would have to eliminate nine unfilled police officer positions because of the more than $865,000 reduction. Wasoski says losing the money will cause more problems than it will solve and put residents at more risk in the future.

Sarah and other activists are disheartened by recent social media rhetoric but they are going to keep pushing for the police department to change.

She recognizes that many police don’t oppose an alternative policing program. They mostly take issue with activist’s other demands and their desire to take money away from the department.

“I think if they can understand those programs have to be funded to exist, the conversation can move forward,” she said.