OU Health Hospitals acting chief medical officer, Dr. Cameron Mantor, said there have been times when the system’s hospitals have had to deny rural hospitals’ patient transfer requests because there were no available beds.

Capacity could soon be an issue

As Oklahoma’s coronavirus case counts continue to break records, some of the state’s top medical experts are ringing alarm bells about hospital capacity.

The state broke yet another daily new case record on Tuesday, surpassing 900 for the first time. Total cases are nearing 22,000. About 500 people are in the hospital being treated for coronavirus. After the initial surge, Oklahoma’s hospitalizations dropped for weeks in the spring. Starting in June, they picked up and have consistently grown. 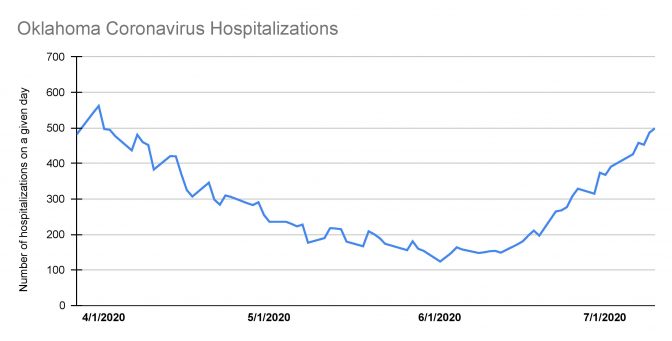 Public health experts and hospital administrators raised concerns about that trend on Monday, during the Greater Oklahoma City Chamber’s annual State of Health event, which took place via Zoom.

Gary Raskob is the Oklahoma City-County Health Board’s chairman, as well as the University of Oklahoma Health Science Center’s public health dean. He spoke during the event’s public health panel.

“We’re seeing an increase in the rate of sick people who require hospitalization, and we are beginning to encroach on capacity significantly,” he said.

The issue isn’t only that covid hospitalizations are growing. It’s that other medical emergencies, such as heart attacks and strokes, aren’t going away.

“Those patients, if we don’t have capacity, will suffer,” Raskob said.

The event also convened a panel of executives from four of Oklahoma’s top hospital companies: Integris, OU Medicine, Mercy Hospital, and SSM Health Oklahoma. The four raised several concerns, including how Oklahoma’s pre-existing poor health outcomes make the virus more dangerous to the state, and the harmful myth that young people aren’t affected by the virus. Each of them also raised concerns about capacity.

Chuck Spicer, the President and CEO of OU Medicine, echoed Raskob’s concerns that the conversation about capacity often glosses over patients without coronavirus.

“We were, at the end of last week, well over 100 percent of capacity at OU Medical Center,” Spicer said. “That was for covid and non-covid. And the non-covid demands are significant. So you can’t turn away those patients. You have to take care of those patients who need you, covid or not.”

Joe Hodges is the Regional President of SSM Health Oklahoma. The system operates several hospitals across the state, including St. Anthony’s in central Oklahoma City. He said that specific facility is a treatment center not only for the metro area, but for much of western and southern Oklahoma.

“We are getting close, in Oklahoma City, to having capacity challenges,” he said.

Across the country, hospital systems have already seen overwhelming demand.

The crisis has taken hold regionally. Oklahoma’s neighbors to the south are seeing patients flown more than 100 miles by helicopter for treatment simply because nearby hospitals have no room, according to the Texas Tribune. Ambulances are waiting 10 hours to drop patients off in emergency rooms for the same reason.

Outside the region, some of the hardest hit states are seeing even worse situations. 43 intensive care units in 21 Florida counties have hit capacity and have no beds available.