The Cleveland County courthouse in Norman, Oklahoma, where the state's opioid trial will take place. 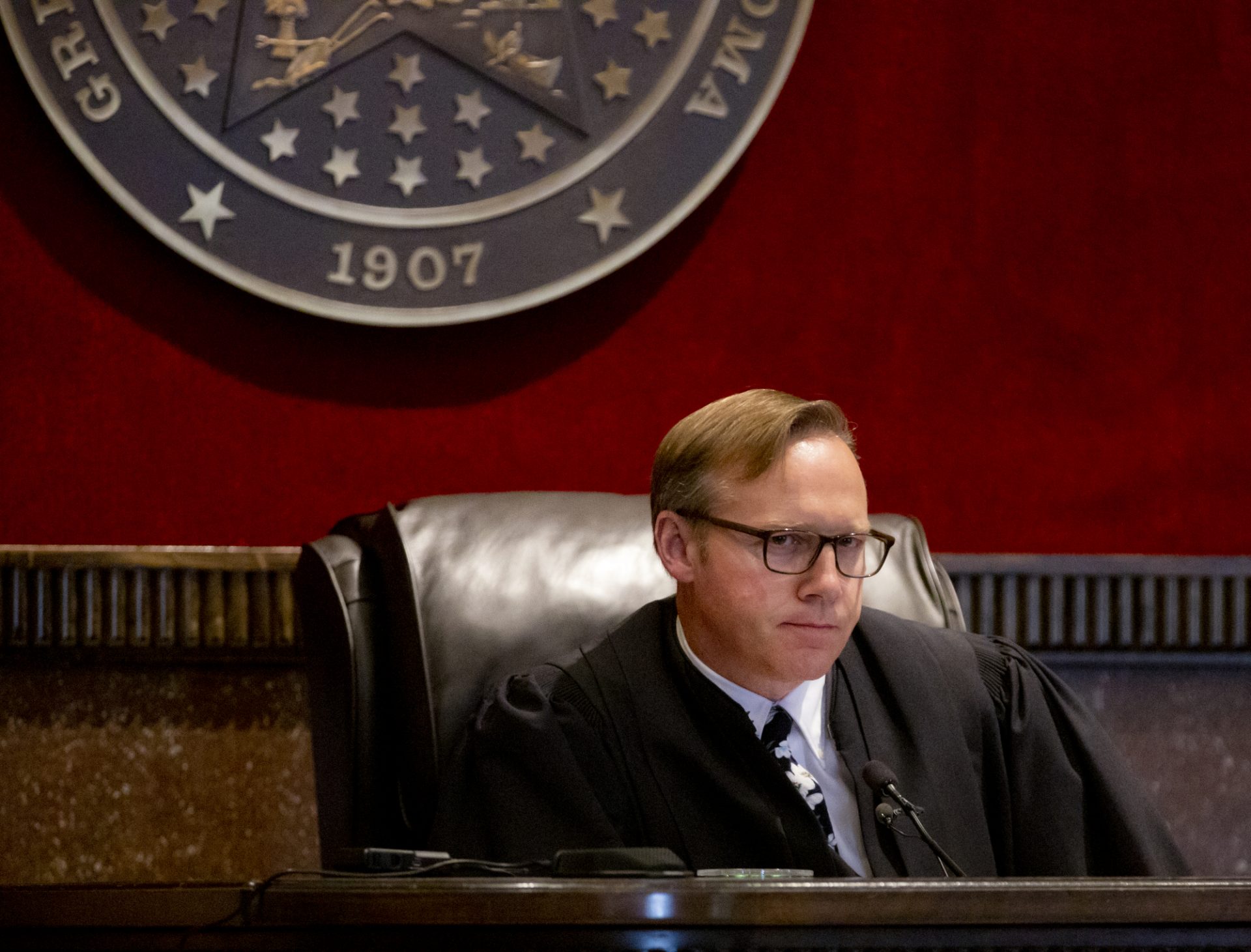 Judge Thad Balkman listens to statements from the defense during the hearing to settle the Journal Entry of Judgment for opioid trial at the Cleveland County Courthouse in Norman, Okla. on Tuesday, Oct. 15, 2019. Judge Balkman ruled last Aug. in favor of the State of Oklahoma, for Johnson and Johnson pay $572 million to a plan to abate the opioid crisis.

A global megacorporation best known for Band-Aids and baby powder is now on the hook for about $107 million less than originally anticipated over its role in Oklahoma’s opioid crisis.

In a judgment filed Friday, state District Judge Thad Balkman revised an earlier ruling against Johnson & Johnson and told the drugmaker to make a one-time payment of $465 million — not the $572 million he had originally ordered.

Balkman’s original ruling on Aug. 26 caused confusion among attorneys on both sides over his calculations and whether the $572 million represented the final amount or just one installment in a larger payment plan.

So on Friday, he revised that number. The roughly $107 million shaved off the August judgment appears to correct a math error that Balkman has acknowledged making. At a hearing last month, he said he had set aside $107.6 million to support programs treating addiction in babies exposed to opioids in the womb — when really he meant to set aside roughly $107,600.

“That’ll be the last time I use that calculator,” he deadpanned at that hearing.

His judgment is one answer to two central questions in this case and thousands of other litigation efforts connected to the country’s opioid addiction crisis: Are drugmakers liable for the effects of the highly addictive opioid medications they produce? And if so, how much money should they owe to help combat those effects?

In the Oklahoma case, the first state lawsuit to make it to trial, the answer to the first question was yes — Johnson & Johnson and its subsidiary Janssen Pharmaceuticals were found liable for overly aggressive and deceptive marketing practices that helped lead to thousands of overdose deaths.

But Balkman’s answer on the matter of money proved to be more ambiguous.

The state’s attorneys had originally asked for more than $17 billion over three decades — or roughly 30 times the amount they actually got in the Aug. 26 order. At the time, Balkman said that the state “did not present sufficient evidence of the amount of time and costs necessary, beyond year one, to abate the opioid crisis.”

At a hearing last month, attorneys for the state said the judge should continue to review every year whether the public nuisance — which is what Johnson & Johnson was technically accused of causing — has been resolved. And in a brief filed with the court, Oklahoma Gov. Kevin Stitt, along with leaders in both chambers of the state Legislature, stipulated that the company should be on the hook for payments at least 20 years — not the state’s taxpayers.

“It is not for the legislature to divert Oklahoman’s [sic] tax dollars, already desperately needed elsewhere, to cover the costs of abating the opioid crisis the Court found Johnson & Johnson caused,” they wrote in their brief.

Johnson and Johnson’s lawyers have argued that a yearly plan was never brought up during the trial and that creating one would violate state law. The drug giant also asked to receive credit for the state’s pretrial settlements with fellow drug companies Purdue Pharma and Teva Pharmaceuticals, which would have reduced the judgment against them by another $355 million.

In his judgment Friday, Balkman rejected that proposal. 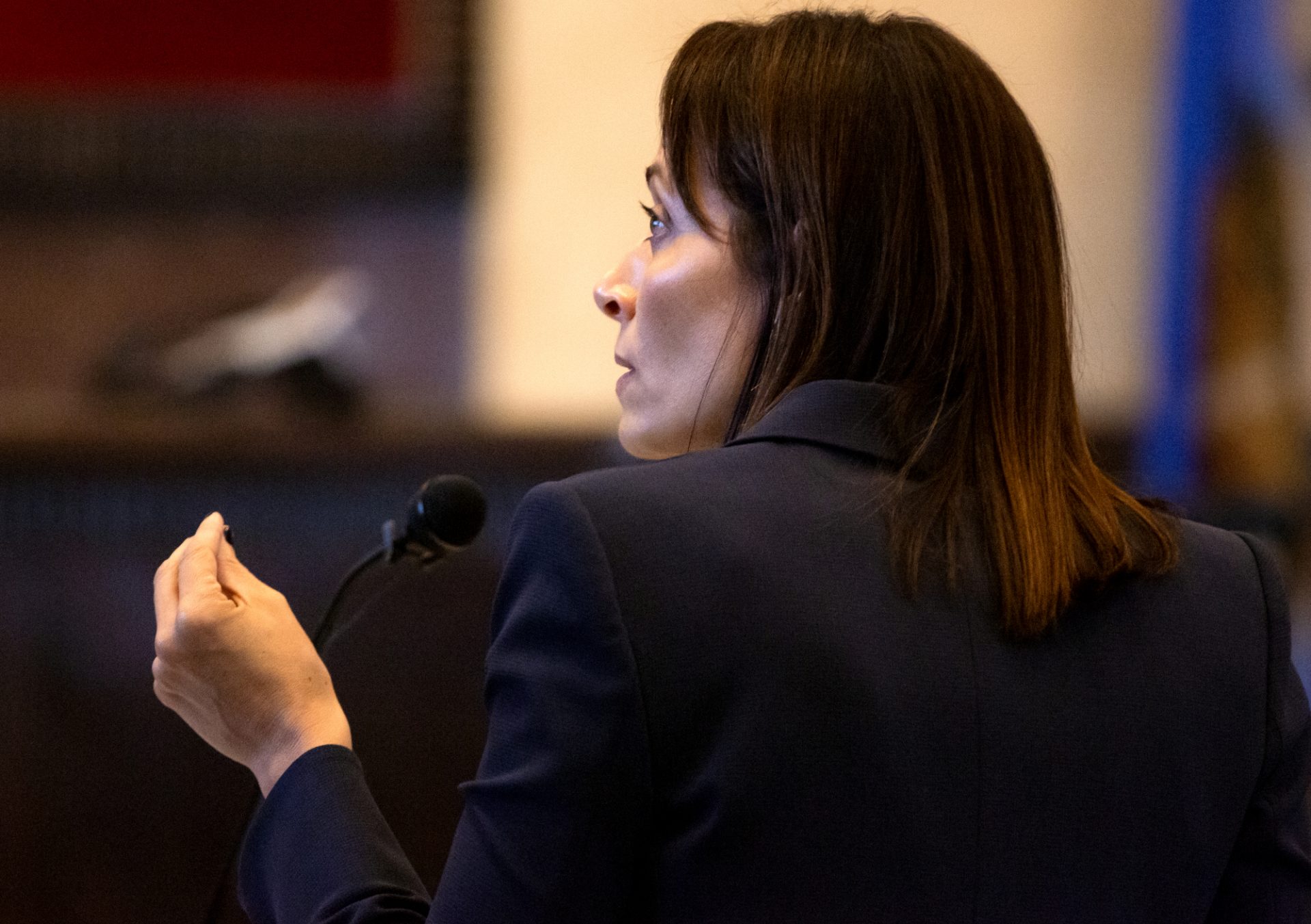 Defense attorney Sabrina Strong speaks to the court during the hearing to settle the Journal Entry of Judgment for opioid trial at the Cleveland County Courthouse in Norman, Okla. on Tuesday, Oct. 15, 2019.

In a statement shared with NPR, Johnson & Johnson said it plans to appeal the judgment “because it is neither supported by the facts nor the law.”

“We recognize the opioid crisis is a tremendously complex public health issue and have deep sympathy for everyone affected,” the company said. “We do not believe litigation is the answer and are continuing to work with partners to find solutions.”

What’s happening in Oklahoma is also of great interest to state attorneys general — the vast majority of whom have brought cases of their own against Johnson & Johnson and other drug companies. At the federal level, more than 2,500 lawsuits filed by local and other governments against drugmakers, distributors, and pharmacies have been folded into one massive federal case now being overseen in the Northern District of Ohio.

That consolidated case very nearly saw its first trial last month, before the courtroom drama was derailed by an 11th-hour settlement between the remaining defendants and the two Ohio counties involved in the bellwether proceedings. Despite that settlement, U.S. District Judge Dan Polster, who is overseeing the massive case, is expected to schedule new trials in the coming year.

Back in Oklahoma, it will be up to state officials and lawmakers to decide how to actually use any money the state gets from Johnson & Johnson. The federal government is trying to claw back a portion of Oklahoma’s $270 million settlement with Purdue, which could further decrease the amount the state ultimately receives.

Lawyers for Johnson & Johnson say they will appeal the ruling. The case will likely head to the Oklahoma State Supreme Court.