Kids make their way across a net bridge at the Gathering Place in Tulsa.

The surprising design of a new Tulsa park, where children learn by escaping adults and facing obstacles 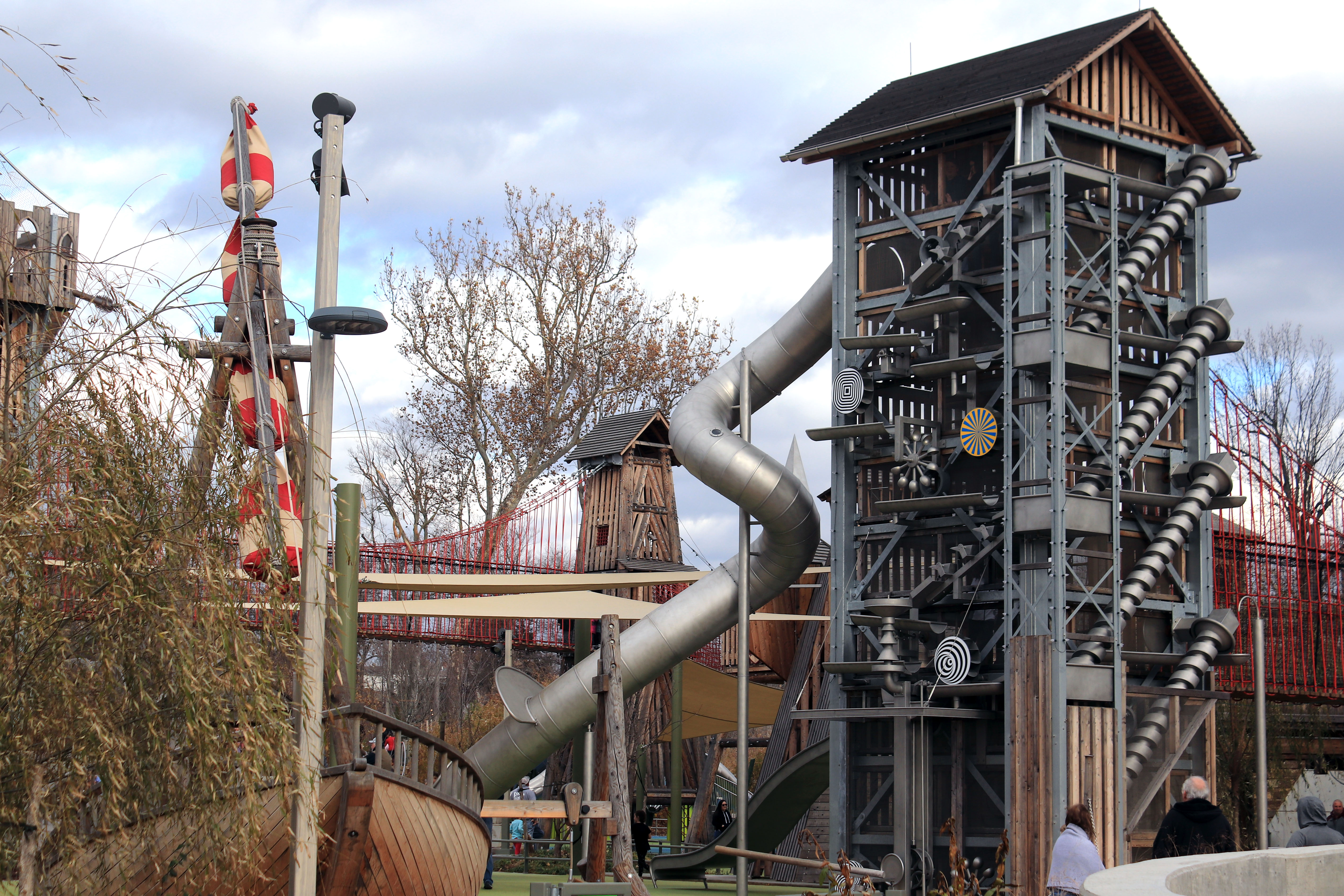 The vertical water playground was designed so that children have to work together.

The Gathering Place in Tulsa is the rare local park that’s made national headlines.

The $465 million project opened in September, transforming 66 acres alongside the Arkansas River into a theme park-like space. It was built mostly through private donations and is free to the public.

Jeff Stava, executive director and trustee of Tulsa’s Gathering Place, LLC, said the main focus of the George Kaiser Family Foundation, which covered nearly half the park’s cost, is to help Tulsa become a standout community for children to grow and succeed.

Supporting the park fits squarely into that mission, because, while the Gathering Place may seem like it’s just a fancy playground, the project was carefully designed to teach children important life skills while they play.

One of the biggest attractions at the park is the Adventure Playground. The five-acre area looks like Neverland from “Peter Pan.”

Kids scramble around on a big wooden ship pretending they’re sailors on a stormy sea. Others maneuver across rope bridges that connect 30-foot-tall towers. In a quieter, calmer section, younger children climb on equipment shaped like bananas and bears.

Levi Wicar, 11, who visited the park from Colorado, said he’d never seen anything like it.

“It’s not like any other place,” he said. “I’ve never seen towers that tall!”

Wicar is probably correct because most of the equipment at Gathering Place was designed by European companies, like Germany-based Richter.

Peter Heuken, a project manager for Richter, said the company intentionally makes equipment that challenges kids to help them develop a sense of self-determination.

“This is very un-American,” he said. “Playgrounds in your country have to be easily accessible for everyone. The smallest toddler must make it to the highest platform.”

But Heuken said not every child should be able to master every piece of equipment.

Instead, he said that while younger children need jungle gyms that are suitable for them, older kids need equipment that brings bigger risks, like taller ladders to climb and steeper slides to tumble down.

“What we want, is really, that the kids are left alone,” he said. “That kids can escape their parents for a moment. That they can climb higher, faster into narrow spots where mom and dad don’t get so quickly.”

For example, it’s hard for adults to get inside the tall wooden towers that are a magnet for so many kids at Gathering Place.  The base of the towers are filled with small crawl spaces that make it easy for children to get through —but not parents.

Heuken wants kids to use the freedom from adults to determine for themselves whether something is too scary. “We want that the child decides, ‘Oh, this is too high for me,’ and not the parent,” he said.

The European-styled playground was also designed to help kids foster an appreciation for natural resources and other life skills, like teamwork.

There’s a tall tower in the park that Heuken calls a vertical water playground. It has big Archimedes’ screws on one face, which are controlled by wheels inside the tower. When children turn the wheels, the big screws on the outside churn and pump water to the top. The water then flows down the other side of the tower, and kids can manipulate which way it flows through a series of gutters, pumps and levers.

Heuken says it’s built so that one kid cannot operate it on their own. “What you have to do as a child is say, ‘Hello’ to the other children, and form a team,” he said.

Sometimes, this means kids are immersed in the task, and create an imaginative story to go along with the work, Heuken said.

“They forget who they are and what they are, and they spend hours doing this. Pumping water, exchanging positions, changing the strategy,” he said. “That is marvelous.”

Heuken also hopes that after a long day of pumping, children learn that things like water don’t come to their homes freely and easily.

“The result will be when little Johnny sits in his bathtub up to the chin in wonderful warm water, he will think that would have meant a lot of pumping,” Heuken said.

As a playground designer and manufacturer, Heuken says he’s seen many parks around the world, but thinks Gathering Place is special. Just like 11-year-old Wicar, Hueken says he’s never seen another place like it.

“I’ve never seen so many happy people in one place” he said. “During the opening ceremony people were hugging each other, kids were jumping for joy. There was a cloud of happy noises over this place.”