Frank Taylor is one of several Taft residents who told StateImpact they're extremely upset that people are escaping Jess Dunn Correctional Center.

When prisoners escape, how can a town without police stay safe?

Runaway inmates from low security areas are common, but the number leaving a prison in Taft is shocking residents. 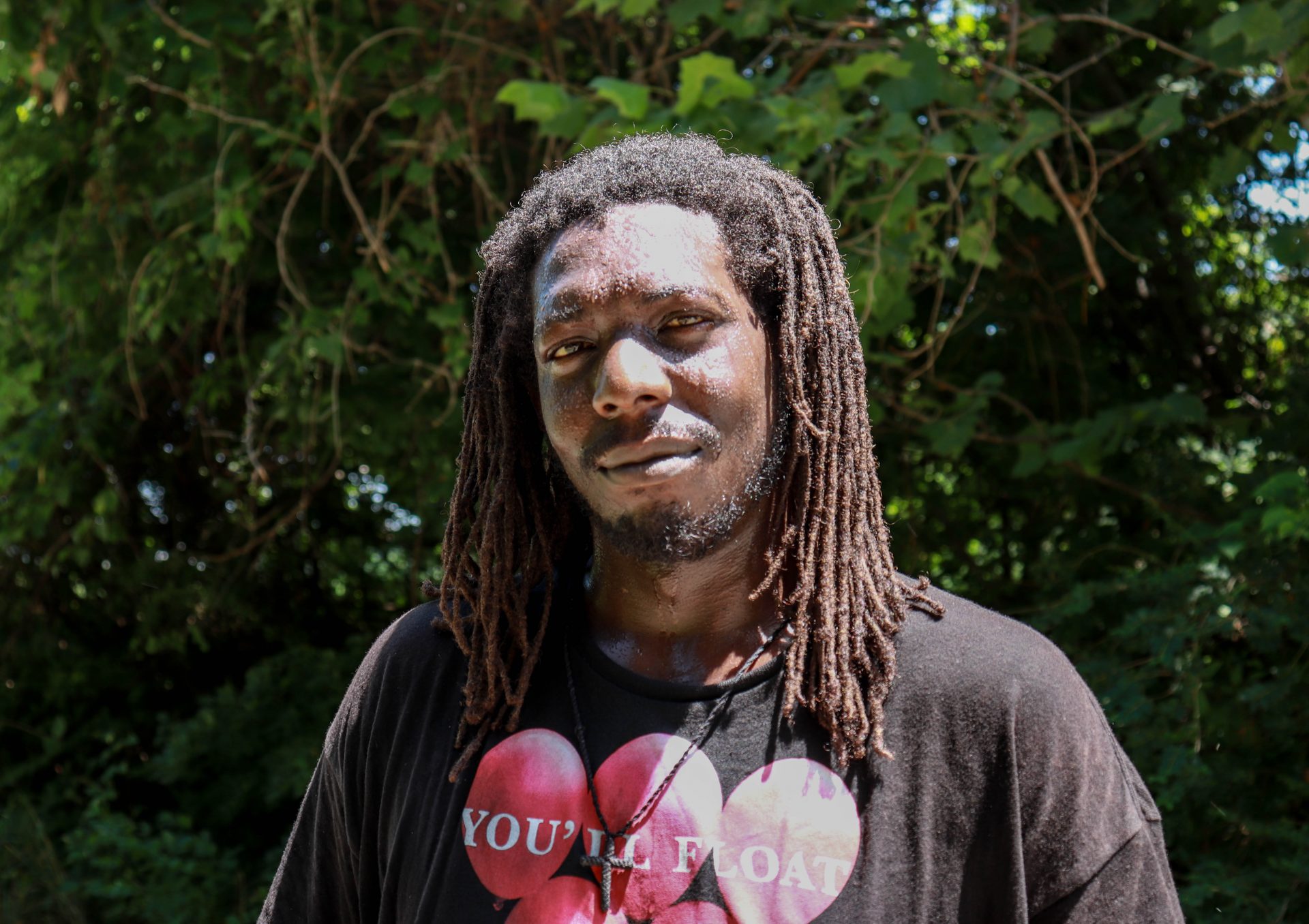 When Frank Taylor moved to Taft from California six years ago, his friends asked how he could live in a town of about 300 people right next to two prisons. He laughed it off.

Taylor says the Oklahoma town is a place where he thought he could leave his doors unlocked. His home, near the center of town, is less than a mile from one of the prisons, Jess Dunn Correctional Center.

The minimum-security men’s prison has a problem.

Seven people have walked away from minimum security prisons in 2018, and four of those escapes happened at Jess Dunn. In 2017, the prison had zero escapes.

Taylor says this year’s escapes make him worry if his wife is safe alone in her own home without a gun. 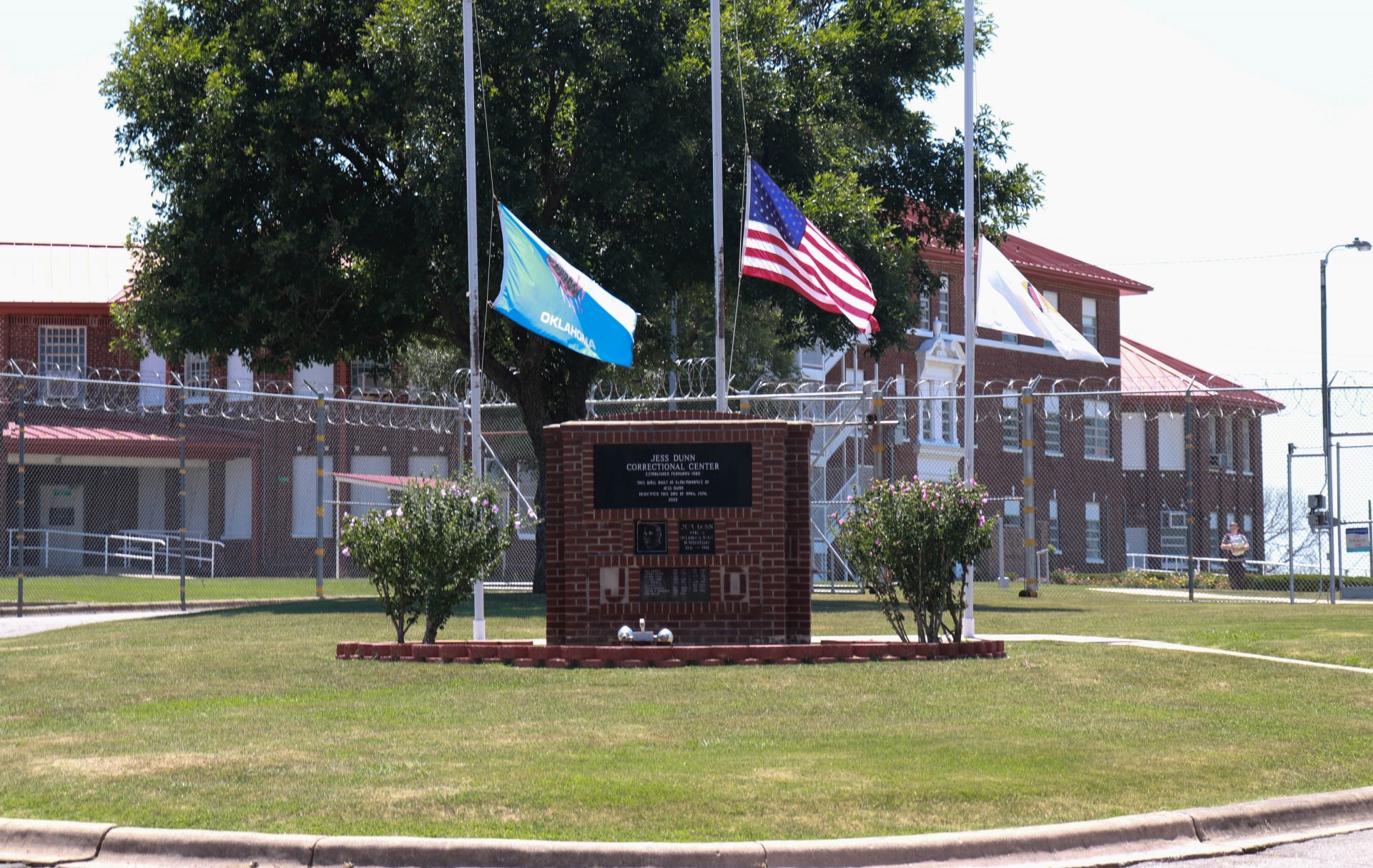 Jess Dunn stands out this year for what the Department of Corrections calls “walkways” — a term for people who decide to run away from low-security areas.

People run away from prisons every year and 2018’s numbers don’t appear unusually high. So far, 133 people have run away — most from low-security buildings where people are allowed to leave during the day to work and return at night.

Minimum security prisons like Jess Dunn are different. Some inmates can go out on work crews for community service, but it’s still a prison.

Taylor says Jess Dunn needs a security upgrade. He doesn’t think the warden and prison guards are doing a good job monitoring people at the prison.

Corrections’ lower security areas are supposed to help inmates transition from prison life to life in the outside world.

Corrections officials say prisons like Jess Dunn aren’t supposed to have the same high-level security as prisons that hold people they’ve deemed a higher risk to public safety. But the agency is trying to stop the escapes.

They’re switching out the prison’s dark-colored jumpsuits to bright orange ones with the word “inmate” on the back. They’re using more sirens to alert residents after escapes — and they want to add more residents to a phone list they call when an inmate is missing.

But there are staffing shortages throughout the state prison system. Officials say Jess Dunn is overcrowded and short 31 guards.

The Department of Corrections declined requests to interview the warden at Jess Dunn. But it did invite reporters to a media event at Jackie Brannon Correctional Center in McAlester. 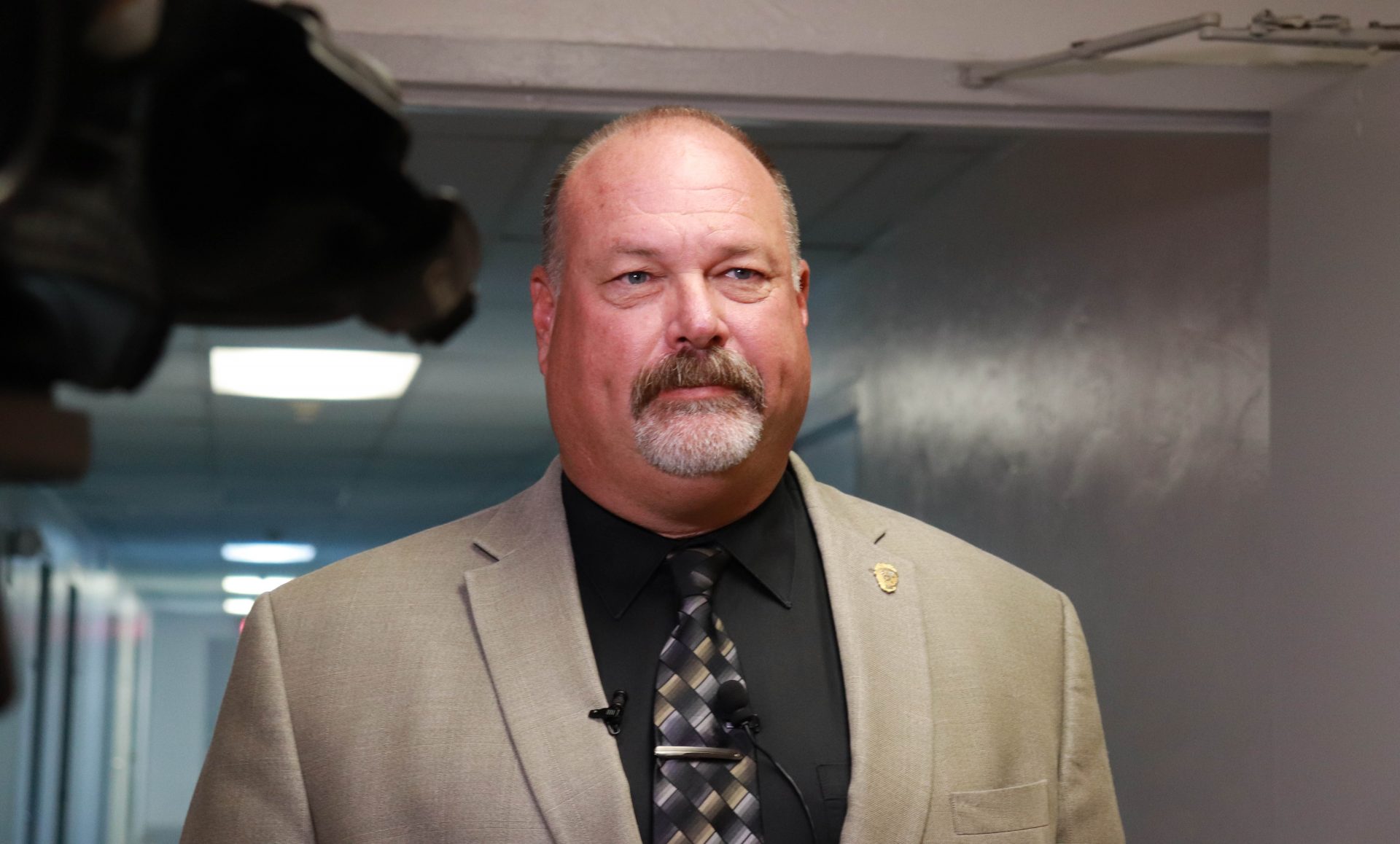 Greg Breslin is the interim warden of Jackie Brannon Correctional Center. The prison has had one escape this year.

Greg Breslin is the interim warden of the minimum security prison. His wishlist for Jackie Brannon includes money for better cameras, more surveillance and additional staff. Breslin says staffing shortages make it harder to stop escapes. At the end of July, someone escaped Jackie Brannon by jumping from a second-story window.

Breslin says the man’s dad had just died. The father and son were close.

“He was upset, and he just thought one time, ‘You know I’m tired of being incarcerated … and walked off,’” Breslin said.

But, Breslin said, very few people run away from minimum security prisons each year — and they don’t usually linger in nearby communities.

That’s little comfort to Taft Mayor Elsie Caesar. Jess Dunn’s security level doesn’t mean much to her because people convicted of violent crimes can still be placed in the minimum-security prison.

“When you talk about security you have to keep that in mind,” Caesar said. She added that there’s a reason Jess Dunn has a fence with razor wire at the top. 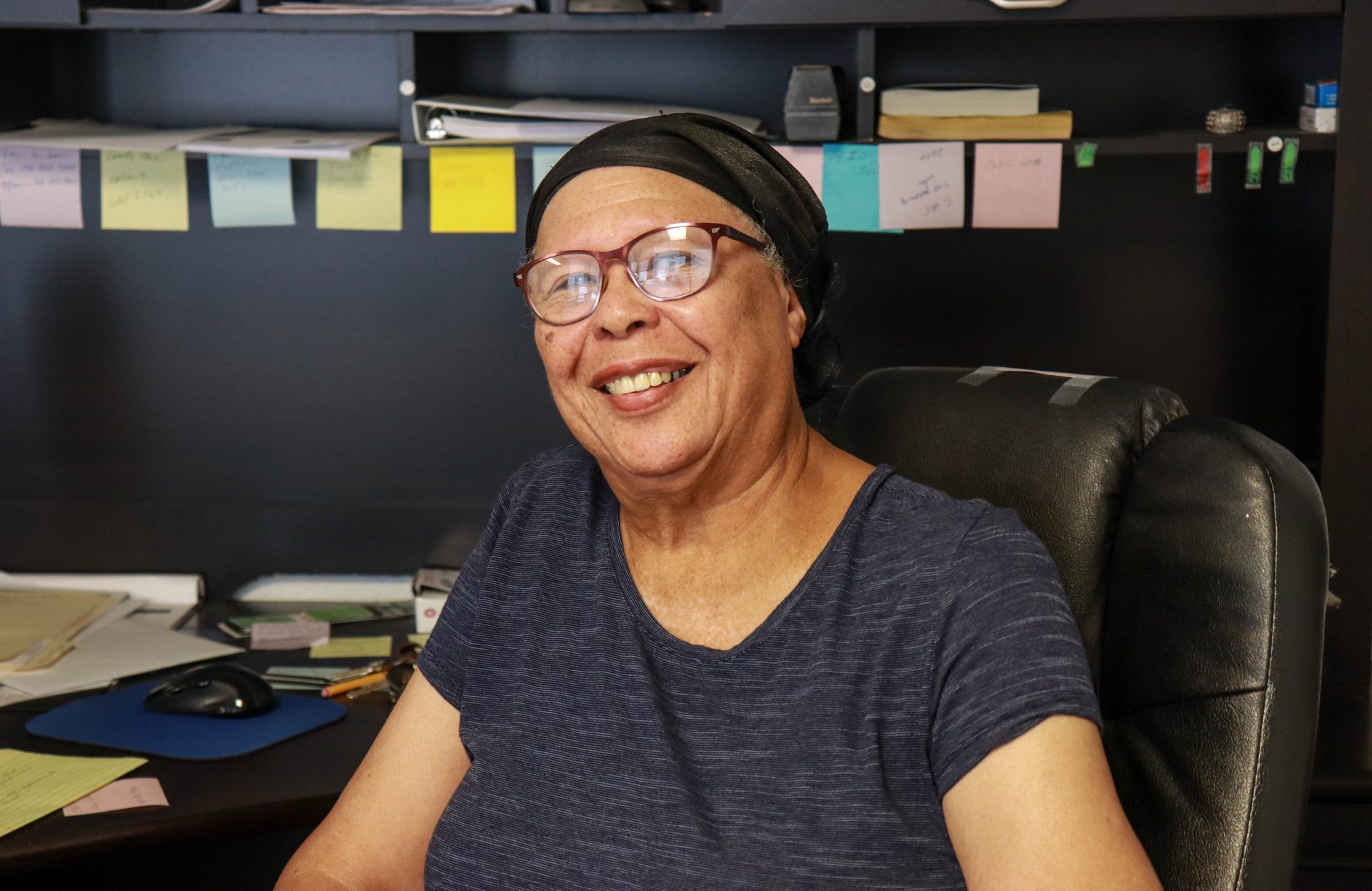 Taft Mayor Elsie Caesar is hoping for an end to prisoner escapes from Jess Dunn.

Caesar wants the Department of Corrections to stop the escapes, but she also wants more police patrolling Taft.

Taft doesn’t have a police force, and that’s one big reason Caesar says residents have been upset about the two prisons since Jess Dunn opened in 1980.

The Legislature wrote a law in 1986 requiring the Department of Corrections to patrol the perimeter of the prisons and the streets of Taft. These days, prison officers do patrol Jess Dunn’s perimeter — but they’re too short-handed to patrol the town.

The law also requires the Oklahoma Highway Patrol to keep a trooper posted in Taft — permanently. Caesar says after the law went into effect, the highway patrol set up the post and then shut it down after about 10 months.

“There has never been another one since,” Caesar said.

The Oklahoma Department of Public Safety, which oversees the highway patrol, disagrees with that timeline. A spokesperson told StateImpact the trooper post lasted about two years before it shut down. DPS wouldn’t say why it closed the post. It declined interview requests and answered select questions by email.

Shortly after coming into office, Taft’s State Representative, Republican Avery Frix, told highway patrol officials they weren’t following the law. Frix says the agency told him it didn’t have enough funding or manpower to maintain a trooper post in Taft.

After negotiating with Frix and Mayor Caesar, the highway patrol did not reopen the trooper post, but it signed a document promising to send assistance to Taft when requested — if it has troopers available.

The Muskogee County Sheriff’s Office does patrol Taft. Sheriff Rob Frazier said he increased patrols throughout the county after he came into office in 2017. Frazier said he ordered deputies to drive through Taft multiple times a day, but he acknowledged it’s not enough and he doesn’t have the resources to do more. The prison escapes frustrate him, too.

Standing outside his home in Taft, Frank Taylor shakes his head. He wants more protection, but he doesn’t see it coming.

Taylor also doesn’t think prisoners are going to stop escaping. He says it has gotten so bad that he might think twice about helping strangers who ask for something as simple as a cigarette lighter.

“For all we know, it could be somebody that’s walked away from the prison.” Taylor said.

Taylor isn’t sure he can count on the prison to sound the alarm — or rely on police to keep him safe. If an escaped inmate comes to his house, Taylor says they might return to prison with a bullet wound.