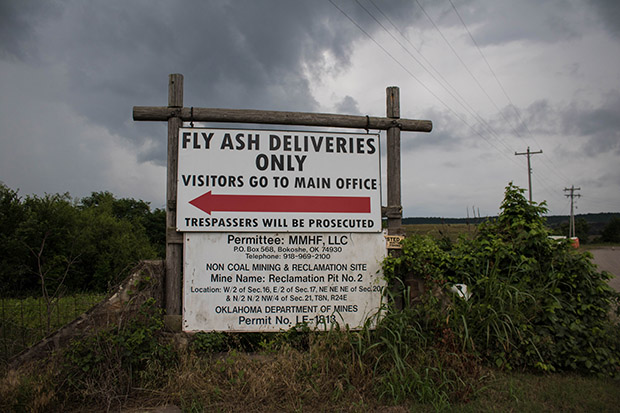 A sign marks the entrance to a coal ash reclamation pit near Bokoshe in southeastern Oklahoma.

Oklahoma is the first state in the nation to receive the U.S. Environmental Protection Agency’s approval to manage its own coal ash disposal program. State and federal officials and utility companies said Oklahoma’s plan would improve oversight, but environmental groups like Earthjustice and the Sierra Club said the move protects industry and endangers public health.

“If anyone believes this decision will protect Oklahoma’s residents from coal ash pollution, then I have some oceanfront property in the state to sell you,” Earthjustice attorney Jennifer Cassel said in a statement. “Oklahoma’s ‘Department of Environmental Quality’ made clear that it wanted state rules precisely to protect industry from public oversight.”

The Oklahoma Department of Environmental Quality applied for the state-run program in 2017 with support from utility companies, which said the state agency should have more autonomy in enforcing rules, ensuring compliance and issuing, suspending or revoking permits for the disposal of coal ash, a byproduct of coal-fired power plants that contains arsenic, lead, mercury and other heavy metals.

A 2015 EPA rule and federal legislation signed by then-President Barack Obama in December 2016 created a roadmap for states to create and manage coal ash programs, which don’t have to be identical to federal coal ash rules but must be “as protective as” the federal guidelines.

Under President Donald Trump, EPA administrator and former Oklahoma Attorney General Scott Pruitt has pushed hard for states to take over management of coal ash disposal. In a March 2018 announcement that drew sharp criticism from environmental groups, Pruitt’s EPA proposed a major overhaul of the federal coal ash guidelines that includes more than a dozen changes to minimum national standards on the design and operation of landfills and pits where the waste is stored.

In a statement announcing EPA’s approval of Oklahoma’s coal ash plan, Pruitt said states, not the federal government, should take the lead on managing coal ash.

“This historic announcement places oversight of coal ash disposal into the hands of those who are best positioned to oversee coal ash management: the officials who have intimate knowledge of the facilities and the environment in their state,” Pruitt said. “Oklahoma is leading the way for other states to establish state coal ash permit programs, and EPA stands ready to work with each and every state to improve coal ash management.”

The Executive Director of the Oklahoma Department Quality Scott Thompson said he was pleased Oklahoma is the first state in the nation to receive approval for its coal ash plan. In a statement, he said Oklahoma’s coal ash permitting rules incorporate the federal rules.

“We have the knowledge and expertise to consider unique and varied local concerns, which will ensure that the program continues to be successful and protective of human health and the environment,” he said.

Cassel, the Earthjustice attorney, said the group plans to challenge the decision in court.

“Pruitt knows full well that the only thing that will happen is for the toxic contamination from coal ash to get worse,” she said. “ Already the coal-fired power plants are violating state and federal rules on coal ash. And yet, Pruitt’s has approved a program that keeps coal ash management behind closed doors and allows his polluter buddies to self-regulate, leaving the fox guarding the henhouse.”