Environmental groups, activists and residents urged the EPA not to approve the state's plan to regulate coal ash at a public hearing in February 2018. 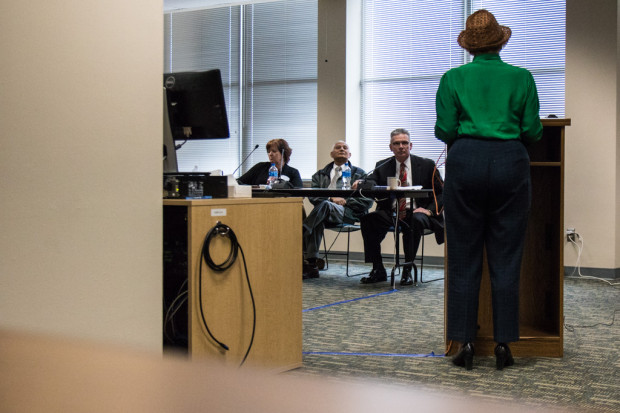 Environmental groups, activists and residents urged the EPA not to approve the state's plan to regulate coal ash at a public hearing in February 2018.

The comments were made at a Feb. 13 public hearing on the Department of Environmental Quality’s effort to get U.S. Environmental Protection Agency approval of its plan to ensure the safe disposal of coal combustion residuals, commonly known as coal ash. The byproduct of coal-fired power plants is known to contain toxic substances like arsenic, chromium, lead and mercury.

Companies that produce and store coal ash support the program, which, if approved, would oversee the waste’s disposal into landfills and ponds at six sites across the state, most of which are located near coal-fired power plants. Companies would submit plans detailing how they would store coal ash, monitor landfills and groundwater for escaping pollutants, and safely decommission landfills.

“The DEQ rules are weaker than the EPA rules,” says Earl Hatley, an environmental activist who serves as Grand Riverkeeper and monitors water quality in northeastern Oklahoma. “This is just a boon for industry to do what they want.”

A 2015 EPA rule and federal legislation signed by President Barack Obama in December 2016 cleared a path for states to create and manage their own coal ash programs. State-administered programs don’t have to be identical to EPA’s coal ash rules, but they must be “as protective as” the federal guidelines.

In testimony at meetings in recent years and documents filed in support of its application to the EPA, Oklahoma environmental officials and utility industry representatives argue strongly for more state authority over coal ash. A state-run program would simplify things for utilities and other companies, they say, and give DEQ autonomy to enforce rules, ensure compliance and issue, suspend or revoke permits.

In 2016 meetings, DEQ employees and representatives also told members of state environmental boards that if Oklahoma were in charge of coal ash rules, it would help protect industry from lawsuits filed by citizens. Such lawsuits are “costly and time-consuming for both parties,” says DEQ spokesperson Erin Hatfield. “And though a reduction in lawsuits is beneficial to industry, the main benefit is to citizens and the ability to resolve complaints without the time and cost of litigation.”

Kelly Foster, senior attorney with the Waterkeeper Alliance, said DEQ’s plan doesn’t provide enough information on how companies are going to comply with the coal ash regulations and falls short of explaining how it will manage new environmental responsibilities with existing resources.

“That is an issue to consider, especially in a state where there are a lot of budget concerns and there have been staff cutbacks,” Foster says.

The DEQ applied for the state-run program in July 2017. EPA officials in December 2017 told the state its plan meets federal standards for approval, a process that includes gathering comments submitted in writing and recorded at public meetings. 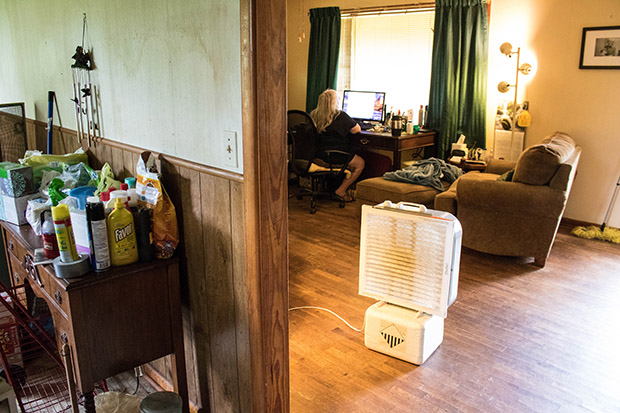 Bokoshe residents use creative methods to deal with airborne fly ash dust, such as this makeshift purifier made by taping an air filter to a box fan.

Multiple commenters at the meeting pointed to Bokoshe in southeastern Oklahoma as an example of the environmental and health problems associated with coal ash. Residents in the small town complain about the powdery ash, which is hauled in from a nearby power plant and used to fill in the pits of abandoned coal mines, a practice EPA considers a “beneficial” use of the waste stream and exempts from federal oversight.

The fine dust infiltrates homes, irritates lungs and worsens asthma and other cardiovascular health problems. Residents are concerned the ash is polluting water sources and causing an uptick in cancer, though an investigation by the Oklahoma Department of Health found no evidence of elevated cancer rates.

The coal waste used for mine fill near Bokoshe is overseen by the Oklahoma Department of Mines and would not be regulated under a state-run coal ash plan sought by DEQ. Environmental groups and commenters like Suzi Howard of Norman say Bokoshe’s problems with the dusty waste highlight the hazards of coal ash.

“The problem is, all that ash and all those things it contains are still underground, leeching slowly with every rain deeper and deeper,” she says.