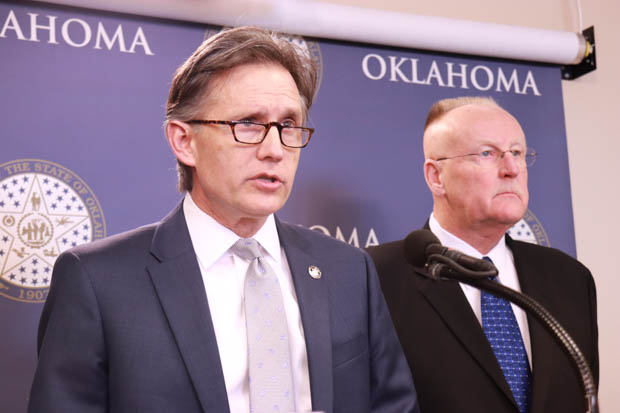 The state ordered a moratorium on executions in October 2015 after major problems with three lethal injections.

In the April 2014 execution of Clayton Lockett, the state added a sedative to its three-drug, lethal injection cocktail that was usually not used for executions. Lockett writhed and struggled against his restraints. It took about 40 minutes for him to die.

Officials in Oklahoma and other states struggled to find a reliable source for the drugs they needed for executions because drug companies stopped permitting states to use their products in lethal injections. That left Department of Corrections Director Joe Allbaugh in, what he calls, a “mad hunt” for drugs.

Allbaugh says he got to the point, “that I was calling around the world to the back streets of the Indian subcontinent to procure drugs.”

State officials say nitrogen is supposed to suffocate an inmate quickly while they inhale the gas.

“I think Supreme Court Justice Samuel Alito summed it up best in 2015 when he said, ‘Opponents of capital punishment are waging a guerilla war against the death penalty,’” Hunter told reporters at a news conference this week.

Officials say the new nitrogen execution protocol will be painless. Don Heath, a pastor who chairs the Oklahoma Coalition to Abolish the Death Penalty, says there’s no evidence that is true.

“The concern with nitrogen hypoxia is that it’s untested and how do you test it on humans,” he said.

Heath says postponing executions is the next best thing to abolishing the death penalty.

Oklahoma officials still have to figure out how it will use the nitrogen in executions. Once a specific procedure is established, officials plan to wait five months before using it to give inmates and their attorneys time to challenge the new protocol.