Oklahoma teachers rallied in support of the Step Up Oklahoma plan on February 12, 2018. The plan would have provided $5,000 teacher pay raises, but failed in the House. 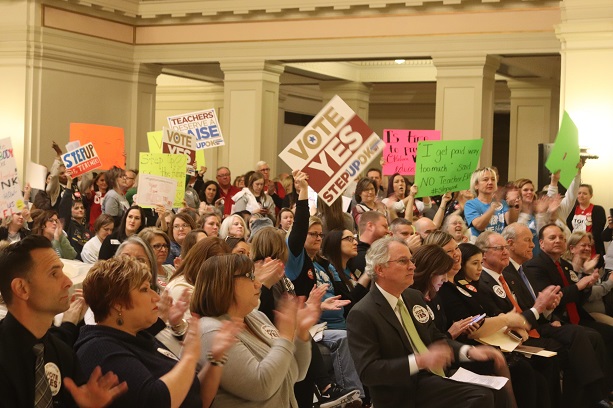 Oklahoma teachers rallied in support of the Step Up Oklahoma plan on February 12, 2018. The plan would have provided $5,000 teacher pay raises, but failed in the House.

The state’s largest teachers union, the Oklahoma Education Association, says they will announce the details of a statewide teacher walkout on Thursday.

Alicia Priest, the president of the OEA, says years of failed attempts by the legislature to increase education funding and teacher pay have forced the organization to consider the walkout.

“Lawmakers have ignored repeated advocacy efforts by OEA members — including thousands of emails and phone calls to lawmakers, days of action at the Capitol, and community forums across the state,” Priest said. “This has led to this crucial grassroots movement of educators to take drastic efforts to save public education and ensure students receive a quality education that prepares them for the future.”

The OEA says they’ll push for a $10,000 teacher pay raise over the next three years, a $5,000 dollar pay raise for school support professionals, a cost of living adjustment for retirees, and the restoration of funding for education and core government services.