A demonstration in Washington, D.C., organized by Teens For Gun Reform in the wake of the Feb. 14, 2018, shooting at Marjory Stoneman Douglas High School in Parkland, Fla. 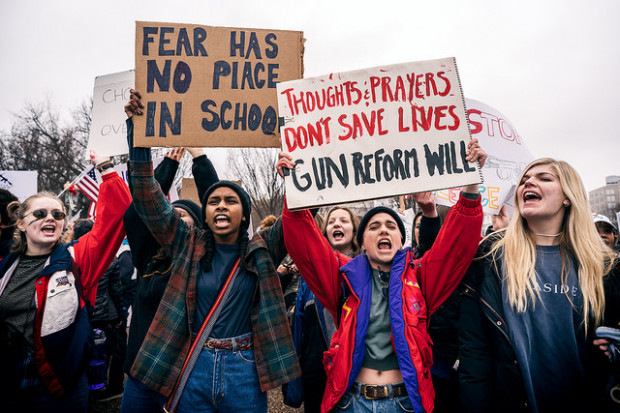 A demonstration in Washington, D.C., organized by Teens For Gun Reform in the wake of the Feb. 14, 2018, shooting at Marjory Stoneman Douglas High School in Parkland, Fla.

Oklahoma lawmakers enacted legislation in 2015 that lets school employees, including teachers, carry guns on campus. Okay Public Schools, near Tahlequah, appears to be the only district in the state that uses the law to arm its staff.

Superintendent Pete Hiseley did not work for the district in 2015 when the Okay Public School Board agreed to let school employees carry guns.

“I can’t speak for all the reasons that this policy was put in place,” he said, “I can only speculate it was for the betterment and protection of our students and our staff.”

He says he when got to the district about 9 months ago he was uncertain about the policy, but now Hiseley says he feels comfortable with it. The Feb. 14 shooting at a high school in Parkland, Fla., has reignited a national debate about gun control legislation and how best to protect schools.

“I have a better understanding about the multiple employees that we have trained,” he says. “I understand what our policy is about. I understand that the training that they have to go through, it’s intense.”

Oklahoma law requires armed school staff to have a conceal carry permit. They’re also required to complete a 72-hour armed guard program. But Hiseley says the staff members with guns at his school are even more advanced.

Hiseley won’t say which school employees are armed. He also says the district would never require any employee to carry a gun.

Hisley says the decision to arm teachers should be made by the community and its local school board. He doesn’t think the state, or anyone else, should tell school officials whether or not employees should have guns.