The principal at U.S. Grant High School in Oklahoma City wants undocumented students to feel safe in school, so he put "Dreamers Welcome" signs throughout the building. 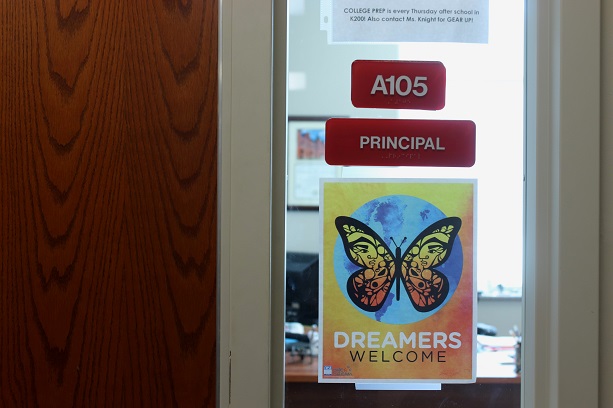 The principal at U.S. Grant High School in Oklahoma City wants undocumented students to feel safe in school, so he put "Dreamers Welcome" signs throughout the building.

When President Donald Trump ordered an end to the Deferred Action for Childhood Arrivals program last September, he put 700,000 immigrants’ futures in jeopardy.

The Obama-era policy, also known as DACA, protects young people who were brought to America by their parents — many illegally — from deportation.

But even as Trump began the process of dismantling the safety net program, he also gave them a glimmer of hope: Trump gave Congress six months – until March 5, 2018 – to come up with a permanent replacement before he ended the DACA program. If Congress doesn’t meet the deadline — now less than two weeks away — those who are currently covered by DACA will become eligible for deportation.

In Oklahoma, there are about 6,000 people protected under the DACA policy. An 18-year-old high school student named Suzeth is one of them. She agreed to talk to StateImpact about what these past six months of uncertainty have been like if we withheld her last name.

‘You lose your wings’

Suzeth’s parents brought her to Oklahoma illegally from Chihuahua, Mexico, when she was 6.

“The first thing I remember seeing is the red soil. It’s not something you see in Mexico,” she said. “And you just see all these stores and all these restaurants. Things you had never seen before.”

In the 9th grade, Suzeth started thinking about going to college, and that’s when she realized she was not a legal citizen of the United States.

“There were a lot of things, like scholarships, that I couldn’t apply to,” she said.

So Suzeth filled out the DACA paperwork and started receiving the temporary protections it provides.The program doesn’t grant a path to citizenship, but it allows people like Suzeth to get a work permit, driver’s license and pursue higher education.

Suzeth says DACA made her feel secure. The program gave her the confidence to plan for college and apply for those scholarships. When Trump announced his plans to end DACA, Suzeth was crushed.

“All of a sudden you lose your wings,” she said. “At the beginning, it felt like there’s not much to wake up to … you just felt like it wasn’t really worth going to school.”

Such a sentiment is unusual for Suzeth, who takes school very seriously. She’s in the National Honors Society, and a top-10 student in her senior class. Suzeth gives her parents a lot of credit for helping her regain her motivation and teaching her to fight back against those feelings of hopelessness.

When she’d find herself losing focus, Suzeth would stop and tell herself, “No. If anything, I’m going to do this work ten times better than the person sitting next to me, because that’s what I have to do right now.”

Suzeth wants to travel to Washington, D.C., to rally in support of DACA. She wants to talk to U.S. lawmakers and tell them why they should support policies and laws that protect young undocumented people like her. Suzeth wants politicians to know there are many others like her who are doing their best to deserve to stay in America.

“Because you can’t demand to stay here if you’re not doing anything,” she said.

There is bipartisan support in Washington for allowing those protected by DACA to become citizens. But Republicans and Democrats are fighting over the details of a broader immigration deal, like money for a border wall.

Meanwhile, Trump’s deadline for action on the program is quickly approaching.

Suzeth’s parents have told her to prepare, and to be ready to blossom in any situation — whether that’s here in America or Mexico.

“We’ve done what we’ve had to do,” she said. “We’ve tried to prove ourselves. Now it’s a matter of believing that whatever happens, happens for a reason.”