What Do Monkey Bars and Test Scores Have In Common? More Than You Might Think 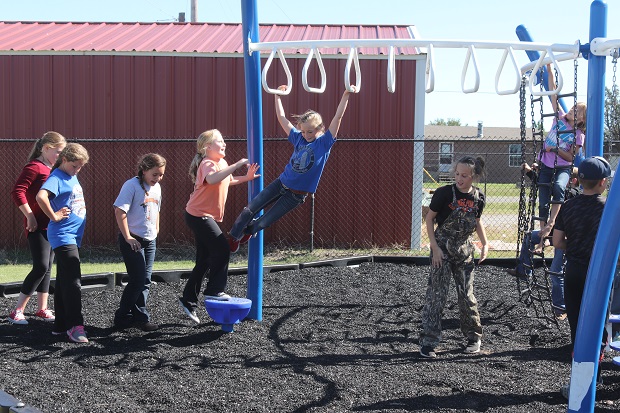 On the playground at Chattanooga Elementary School some kids are pretending to be pirates, a few boys are climbing on a baseball dugout, and another group is belting out the words to various pop songs as they wriggle across the monkey bars.

This is the students’ third 15-minute recess of the day, and they’ll get one more before the end of the school day in the tiny southwestern Oklahoma town of about 450.

Added up: That’s an hour of recess a day — double what these kids got two years ago, and double what most kids in America get.

Chattanooga’s students might seem lucky, but they’re actually part of a study examining how extra recess time affects their mental and physical health — and, ultimately, the kids’ academic performance.

Debbie Rhea, a professor and researcher at Texas Christian University, designed the study after visiting Finland, where students take a mandatory 15-minute play break every hour. Schools in Finland consistently rank among the best in the world.

“They continue to cherish play in Finland,” Rhea says, “And play itself is the job of a child.”

Over the past few decades American schools have whittled away at recess time in order to deal with increasing demands of testing. Some schools have even eliminated it.

“Young people are naturally curious,” he says. “They want to learn, but to ask them to sit in their desk all day, without breaks, without giving their minds a break, is just wrong for us to do that.”

When Brown heard about Rhea’s recess study, he immediately wanted to sign his school up.

Now in the second year of the three-year-long study, Brown has actually taken time away from the classroom to allow more time for recess.

“It’s a huge change in how you do things,” Brown says, “I think that scares people.”

Fifth grade teacher Jackie Gable says, at first, she was scared to reduce the amount of classroom time.

Gable is now a believer.

“We get so much more done here, because they have those breaks,” she says. “They are truly focused in the classroom, so we don’t lose the instructional time.”

When StateImpact visited in October, kids seemed to have the program nailed down. They knew when their teacher’s alarm went off, it was time to go play, but when their 15-minute break was over, they came back to class with no fuss, sat down quietly, and looked ready to learn again.

Gable says she’s noticed other improvements, too. Her students are much more creative than they used to be, and they’re more engaged. Prior to the recess program, she says students rarely asked questions in class. Gable says students now seem more curious.

“They’re starting to piece together things that they’ve learned,” she says. “In a way I feel like their minds are really open.”

“When we first started this last year they didn’t know how to play. To use their imagination, that was hard for them,” she says. “Now I see constant laughter and they’re coming up with different games to play every day.”

“You don’t see as many of the kids coming to us, having us have to solve a problem for them,” she says.  “They are learning to [do] conflict resolution themselves.”

Rhea, the researcher, is conducting the study in 20 schools — 19 of which are in Texas. The Texas schools have shown a 2 to 3 percent increase in students’ math and reading scores. Due to Oklahoma’s new tests and grading guidelines, she says it’s too early to evaluate the program’s effectiveness.

Beyond grades and test scores, however, Rhea says the recess program’s results are consistent across all schools.

“We always see somewhere between 28 and 30 percent decrease in off-task behaviors, which defines as fidgeting, moving around the room, or staring off into space,” she says. “And disruptive and aggressive behaviors are almost not seen at all anymore.”

“It puts them in a parasympathetic nervous response, which is a relaxed response,” she says, “And it creates thousands of new highways in their brains.”

Superintendent Brown says with or without a change in academic scores, he’s already seen enough evidence to know it’s the right thing to do.

“In education we have to start thinking more about the whole child,” he said.