Students at Luther High School watch Martin Luther King Jr.'s "I Have a Dream Speech" before a class discussion. 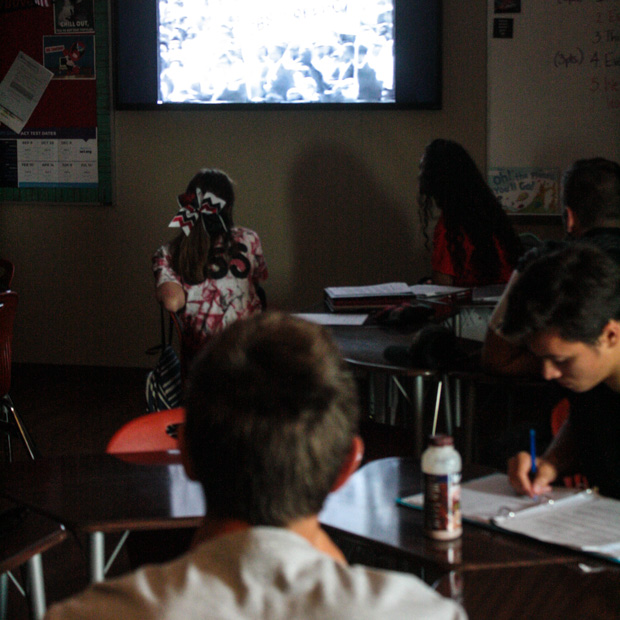 Students at Luther High School watch Martin Luther King Jr.'s "I Have a Dream Speech" before a class discussion.

Polls suggest this is one of the the most politically divided moments in American history. There are now tip sheets on how to survive Thanksgiving without disowning your family, and the comment sections of online news articles are full of vitriol.

Schools are not immune to the tension, but not everyone thinks that’s a bad thing.

Some Oklahoma teachers, like Rhonda Hlavaty, are actually asking their students to discuss controversial topics in class. Hlavaty, who teaches English at Luther High School, uses current events to help her students learn how to have discussions and, potentially, disagree with their classmates.

After a recent class lesson on the Gettysburg Address, the Preamble to the Constitution, and Martin Luther King Jr.’s “I Have A Dream” speech, Hlavaty asked her students to form a circle and discuss the texts’ theme of equality, and what it means to them in 2017.

“This is a conversation for us to get out our ideas about what is happening in this country now, what was happening then,” she told her class.

Hlavaty reminds her class the discussion exercise is a conversation, not a debate, and that respect is a priority. After some prompting, her students open up.

Jacob Rosecrants, a former history teacher at Roosevelt Middle School in Oklahoma City, also felt the need to talk about current events with his students. His students, however, were the ones who proposed daily discussion topics.

“The first thing that came up really big was Charlottesville, and that was a touchy subject,” he says.

Rosecrants just won a special election for a House seat in Norman, so he’s at the state capitol now and no longer in the classroom. When Rosecrants was teacher, he tackled Charlottesville by talking about the protest and its response, teaching a class lesson about the Civil War, and the statue at the center of the fight. He then turned the discussion over to the students and let them share their thoughts.

“Sometimes you’ll have to be careful because some kids will want to dominate the conversation,” he says, a problem he solved with a toy ball the kids tossed around to signify each student’s turn to talk.

“I’ll open it up to everybody else by having a little ball where if a kid is done answering a question they can throw it to somebody else.”

Eventually, the students were so interested in the news, Rosecrants started devoting Fridays to class discussions about current events. Overall, he says, the conversations were civil. 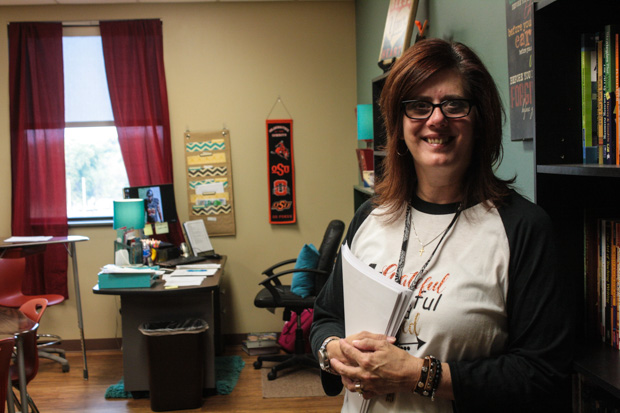 University of Pennsylvania education researcher Jonathan Zimmerman says more teachers need to follow the example set by Hlavaty and Rosecrants. In his new book, “The Case For Contention,” he argues the country’s fading ability to discuss controversial issues is part of the reason the nation is so divided.

“We are now in our country talking past each other,” he says. “We’ve in many places, lost, or at least diminished, the ability to disagree.”

Zimmerman says schools are a good place to reinstate some of these skills.

“We are so polarized,” he says, “We’ve given our young people such poor models of what political dialogue is, that we need our schools to teach a better way.”

Zimmerman says teachers should not indoctrinate students with their own point of views, but rather help kids work through their feelings, do research, and guide civil class discussions.

Not everybody agrees. Some teachers are actually told to avoid controversy and current events.

After a white police officer from Ferguson, Mo., shot and killed Michael Brown, who was black, a local superintendent told his teachers to change the subject if kids brought it up. Horace Mann, a leading figure in the creation of public schools, is even quoted as being against contention in the classroom:

“If the day ever arrives when the school room shall become a cauldron for the fermentation of all the hot and virulent opinions, in politics and religion, that now agitate our community,” Mann wrote in 1844, “the fate of our glorious school system will be sealed, and speedy ruin will overwhelm it.”

Others say teachers should just stick to core subjects and leave politics to parents.

Zimmerman understands where they’re coming from.