Lindsay Judd will be one of hundreds of emergency certified teachers taking the helm of Oklahoma classrooms this year. 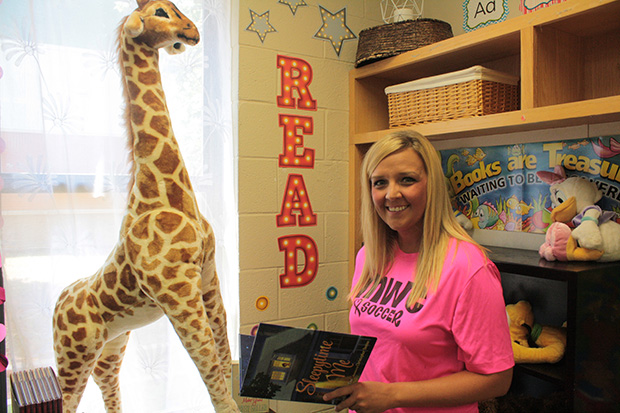 Lindsay Judd will be one of hundreds of emergency certified teachers taking the helm of Oklahoma classrooms this year.

Oklahoma schools are becoming more and more reliant on teachers with no training.

A lack of school funding, low pay, and waning morale have driven many of the experienced teachers out of the classroom, or out of the state.

Superintendent of Mid-Del Schools, Rick Cobb, said he used to have 10 to 15 applicants for every open teaching position. Now he’s lucky if he has two.

“You want to know you’re picking the best person that you can, and that’s hard to do now with the super shallow pool of applicants,” he said.

In recent years, schools have been resorting to emergency teaching certifications to fill open positions. These allow schools to hire someone with no teaching experience, and get them in to the classroom as quickly as possible.

Normally, a person would have to complete the full certification program before becoming a teacher, but with an emergency certification they can work on the process after being hired.

Since 2011, the state has seen a 3,000 percent increase in the number of people taking this accelerated route.

Lindsay Judd is a newly-emergency certified teacher in the Mid-Del school district.

She’s a former businesswoman with no teaching experience, but will be taking on a second grade class this year at Pleasant Hill Elementary.

“I’m terrified,” she said. “It’s a huge responsibility to be responsible for someone else’s children. And not only their children, but their children’s education. Like, I don’t take that lightly at all.”

She feels confident about the classroom management aspect of teaching; she’s got three daughters, and said they’ve given her plenty of practice wrangling children. But she’s got some catching up to do when it comes to the educating kids part of things.

“I have to learn how to write a lesson plan, because I don’t have formal training in that,” she said.

Before this, Judd worked for the Chamber of Commerce in Midwest City. She liked it, but said it kept her from spending time with her kids, and that’s part of the reason she decided to make the change.

When she told her brother —who has a college degree in education and has been teaching for three years—he tried to talk her out of it.

Judd says her brother loves his job, but he gets frustrated by the lack of funding and all the testing; two issues that have driven many teachers away from the profession.

Judd said she appreciates that he’s trying to protect her, but she’s ready for the challenge.

“I want to do a great job. I just want greatness for this classroom,” she said. “I’m not going to just jump ship, I mean, because they are going to rely on me.”

To get ready, she’s been reading books, and asking for advice on social media. Her favorite tip so far:

“Somebody said it best: my lesson plans are the agenda to the meeting, not the minutes of the meeting.”

HARDER THAN YOU THINK

“In my case, I worked out a lot of rough draft problems as a student teacher,” he said. “Figuring out you can do this, you can’t do this, this is what it’s like to be underprepared, while having someone over my shoulder to make sure that I only slipped and I didn’t fall. And so our emergency certified teachers don’t really have that advantage.”

Still, he said some of them become rock stars. Others don’t last a week.

“They’re surprised that the job is this hard,” he said.

Cobb will have 28 emergency certified teachers in his district this year, but across the state there will be hundreds more. In the past, the school districts with the highest numbers were Oklahoma City Public Schools, Tulsa Public Schools, Putnam City Schools, Lawton Public Schools and Enid Public Schools.

Cobb said the hope is that they stay and become long-term teachers, because otherwise the churn can really mess with a school’s climate.

Cobb hopes to give all his first-year teachers some extra professional development this year, and intends to start by checking on them at the end of their first day.

“You know, ‘What was your first day like?’” he said. “And they’re running out the door with their hair on fire, or they’re kicking themselves for not getting into education sooner.”