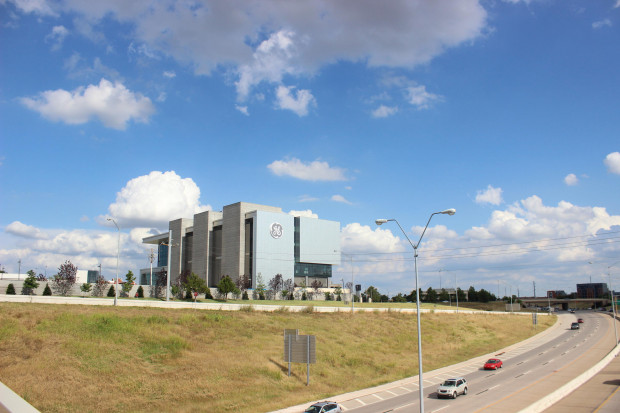 A new report from the Brookings Institution says Oklahoma City is positioned for growth. It says the city has a solid layer of infrastructure essential for development — and diversifying the economy.

But there’s a threat to this development, and that’s a potentially weak workforce. Some researchers say local officials need to ensure schools provide the training innovative companies need. And they need to be doing it now.

Scott Andes of the Washington, D.C.-based Brookings Institution says Oklahoma City can beat out international competitors — not by innovating within a single industry — but instead by finding ways for its industries to work together.

“In the report we talk about how to form linkages between health care and energy,” he said. “How do you take some of the great technologies being developed by the Oklahoma Medical Research Foundation or OU and find ways to connect them to, say, Devon Energy?”

The report focuses specifically on a small corridor of Oklahoma City near the University of Oklahoma Health Science Center and General Electric’s new Oil and Gas Technology Center. Andes and others have dubbed areas like these potential “innovation districts.”

“You’ve got an extremely small area that’s extremely research intensive,” Andes says. “The question becomes: How do we take that great capacity and build jobs and companies around it?”

Andes said if Oklahoma City’s leaders can make it easier for these major industries to collaborate, then other tech-savvy companies will want to set up shop here, too. That can bring in more high-paying jobs, and diversify the local economy for years to come.

The idea of blending education and technology is catching on in other cities, too. Broken Arrow, for example, is planning an innovation district centered around a new manufacturing and technology campus.

Andes said city leaders have work to do if they want these districts to succeed. Cities need to invest more money in infrastructure where innovation among these different business sectors can occur. He suggests building an “Oklahoma Center for Energy and Health Collaboration”. But, he says, city leaders also need to nourish their workforce.

“You cannot have a well-functioning innovation district, one that’s both inclusive and impacts the broader economy, without a clear pipeline through your education system,” he says.

This includes K-12 education and other workforce development programs, but Andes questions whether the state itself is spending enough money to get Oklahoma school children where they need to be to thrive in the 21st-century economy. He said if Oklahoma doesn’t increase its K -12 investment soon, the state might lose out.

“When companies and others start making their bets around the world, are they going to look at Oklahoma City? If you don’t have the workforce it won’t happen,” he says.”

The Legislature is ‘not acting’

Oklahoma City Council member Ed Shadid is taking the Brookings study and running with it.

He said the findings are just more evidence the city needs to take education funding matters into its own hands.  Shadid has proposed a temporary, city-wide income tax to give city teachers raises and hire more of them, which would help reduce class sizes.

“Obviously it’s not your first choice for a funding mechanism for Oklahoma City Public Schools,” Shadid says. “But we’ve waited for years for the legislature to step up and find a solution. And it’s not acting.”

Others city leaders, and school district administrators have expressed a desire to have more local power over school funding, but Shadid is among the first to take action. Other city council members oppose the income tax plan, but all agree that local schools are one of the biggest factors in economic development.

So, Shadid says now is the best time to step up and help the schools in the area—and ensure growth for the future.

Shadid said the city’s largest school district — Oklahoma City Public Schools — has been in constant crisis mode over the last couple of years due to about $40 million in state cuts, and he worries these cuts will have long-term effects on the quality of the workforce coming out of local schools.

“These companies need them to be as educated as possible,” he says. “But when we continue to lose teachers to surrounding states because they pay so much more money, and when we continue to cram more and more children into the same classroom, it makes it very, very difficult for kids to get the attention that they need and crave.”

If Oklahoma City wants to grow and flourish in the future, Shad says it can’t want on the Legislature to increase school funding.

“We’ve got to look to local solutions,” he says.