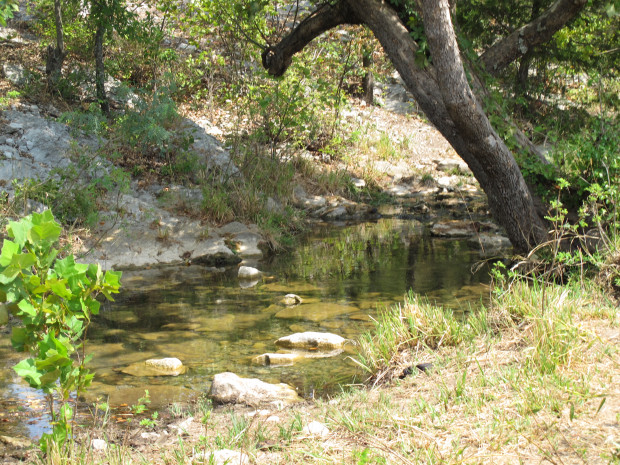 The crippling five-year drought Oklahoma finally broke out of in 2015 is still fresh in the memory of the state’s water regulators, which is looking for ways the state can better withstand future dry spells. The Water Resources Board this week approved new rules to allow water to be stored underground, in aquifers.

Byrd’s Mill Creek is fed by Byrd’s Mill Spring, the southeast Oklahoma community of Ada’s primary source of drinking water. The cold, crystal clear water that flows over the mossy rocks of the streambed bubbles up from the Arbuckle-Simpson aquifer, which is vital to this part of the state.

One problem: There’s a limit to how much this and every other Oklahoma aquifer can give, and growing cities and booming agriculture and applying more pressure on the subterranean reservoirs. But Ada Mayor, groundwater researcher, and East Central University Professor Guy Sewell thinks he knows a way to reverse the depletion of aquifers: Build leaky ponds.

“We refer to it as advanced aquifer recharge,” Sewell says.

When lots of rain falls, the porous ponds would speed water back down into the aquifer much faster than it takes to soak through the ground on its own. Sewell says it’s a lot better than watching storm-flow rush down the rivers — and out of Oklahoma. He expects Ada to embrace aquifer storage and recovery in the near future.

“I’ll go further than that: I think as a nation we’ll be doing this on a large scale,” Sewell says. “It’s really the only tool we have left to enhance availability of water during dry periods, whether that’s a summer or a dry year. This is all we’ve got.”

Not new, but new to us

“Our motto is to boldly go where Kansas, Texas, Arizona, and California, and half a dozen other states have already gone before,” says Saba Tahmassebi, a chief engineer with the Oklahoma Department of Environmental Quality.

Tahmassebi says Oklahoma towns and cities have traditionally relied on lakes for public water supplies, but in some ways it’s impractical and expensive to build new above-ground reservoirs.

“When the temperatures are hot and then there’s not enough precipitation, not enough water will go to these lakes,” Tahmassebi says. “Also, these lakes act as evaporation basins. You lose a lot of water through evaporation.”

Tahmassebi envisions Oklahoma communities using wells, not to pump water out of aquifers, but put it back in.

“This is where you get an alternate source of water,” he says. “For example, if you have periods of high precipitation and rain, maybe that water can be diverted and treated and injected back into the ground so the water can be used for the future.”

Clearing a path for aquifer storage

So why is a drought-prone state like Oklahoma behind in the aquifer storage game? There are no rules or regulations to allow it, state and local officials say. Aquifer recharge and storage creates unique challenges for state rulemakers: Who owns water injected into aquifers? And to what level does it need to be treated and cleaned first? State water planners are working to fill that regulatory void.

The Water Board’s interim director Julie Cunningham says the framework has been set, but there’s more work to do. DEQ and the Water Board have more rules to write. Aquifer storage is complicated, and has to be done properly.

Once all the rules have been written, it will be up to the state legislature to give them final approval. That likely won’t happen until next year.