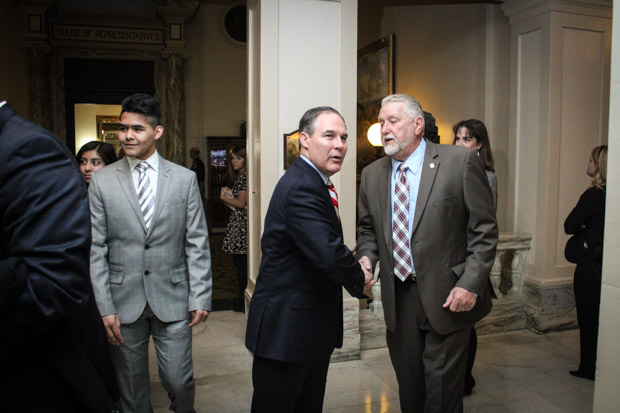 A judge on Feb. 16 ordered the attorney general’s office to release the emails in response to a lawsuit by the Center for Media and Democracy, a left-leaning nonprofit watchdog group that requested the documents two years ago under Oklahoma’s Open Records Act.

The release contains about 7,500 pages of emails, none of which suggest any illegal activity. The emails do show industry and political interest groups enjoyed a close, comfortable and collaborative relationship with Pruitt’s attorney general’s office.

The AG’s office did not release emails it believes are exempted from public release. District Judge Aletia Haynes Timmons is reviewing those claims, and has ordered the agency to produce other emails requested by the watchdog group.

Pruitt and the EPA did not respond to requests for comment. In a statement, the Oklahoma AG’s office said the records lawsuit was politically motivated. In previous interviews, testimony before Congress and other public remarks, Pruitt has made it clear he thinks industry should have a prominent seat at the table when governments write regulations and rules.

“I believe that we as an agency and we as a nation can be both pro-energy and jobs and pro-environment,” he said in his first address to employees at the EPA.

Some of the emails released include ones requested by the New York Times for a 2014 investigation.  Pruitt sent one letter to the EPA that was written almost entirely by Devon Energy, in which he accuses the agency of overestimating the amount of air pollution from oil and gas wells in Oklahoma.

Republicans defeated procedural boycotts by Democrats and ignored requests to delay Pruitt’s confirmation vote until the emails were released, praising the then-Oklahoma attorney general as a much-needed reformer eager to roll back job-killing and ineffective environmental regulations.

The Center for Media and Democracy’s Research Director Nick Surgey says the emails give the public a guide for scrutinizing Pruitt’s involvement in environmental regulations going forward.

“There will be some serious questions asked about whether Pruitt should recuse himself from certain decisions he would make as head of the EPA,” he says.