Pruitt Suggests New Direction for EPA in Address to Employees 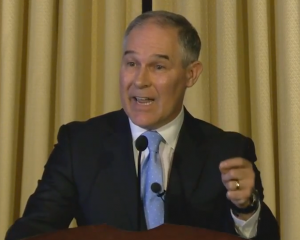 Speaking at EPA headquarters in Washington, D.C., Pruitt told the agency’s 15,000 workers — some of which strongly opposed his nomination — he would listen to their ideas and encourage civil debate on key environmental issues. He indicated a narrow interpretation of the agency’s authority, saying the EPA’s oversight had to be “tethered” to statute.

Pruitt said he’d rebuild the EPA’s partnership with state regulators and he pledged to ensure the environmental rule-making process is open, transparent and objective. But, he said, federal regulators have an obligation to make sure those rules provide certainty for industry.

In his first interview since his Feb. 17 nomination, Pruitt told the Wall Street Journal he wants the EPA to prioritize helping states meet air-quality targets, clean up toxic sites through the agency’s Superfund program, and to help improve the nation’s water infrastructure:

“Look at what happened in Flint,” the Michigan town where lead was found in the water supply. “Look at what is happening in California,” where the Oroville Dam’s failure endangers tens of thousands of homes.

President Donald Trump is expected to release this week new executive orders rewriting Obama’s signature Clean Power Plan. Also expected this week: Emails between the attorney general’s office and fossil fuel companies, which a district court judge on Feb. 16 ordered turned over to her in response to an open records lawsuit filed by a nonprofit watchdog group.